German Chancellor Angela Merkel has met with Turkish Prime Minister Ahmet Davutoglu for more talks on reducing the influx of migrants to Europe. Both condemned the Russian-backed airstrikes over Aleppo in northern Syria. 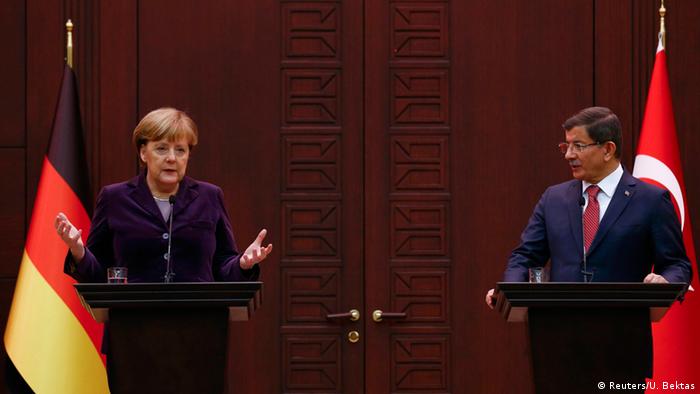 Angela Merkel's visit on Monday came just weeks after the EU settled a deal with Turkey, which would see Ankara receiving 3 billion euros ($3.35 billion) in aid towards the care of the 2.7 million Syrian migrants already in Turkey.

"It's important to see quick, visible improvements for refugees in Turkey," Merkel said on Monday.

In exchange for the 3 billion euro aid package, Turkey has pledged to help protect Europe's borders. Germany has been hit particularly hard in recent months, with an unprecedented 1.1 million asylum seekers arriving last year - many of them fleeing conflicts in Syria, Iraq and Afghanistan.

Davutoglu said on Monday that Ankara would inform Brussels next week about their initial plans for the financial aid. Turkey has already agreed, however, to grant work permits to Syrians as an incentive for them to stay in Turkey. Other plans include increasing coast guards' capabilities and designating human smuggling as a form of organized crime - which would result in stricter punishments.

The Turkish prime minister also announced plans for Germany and Turkey to carry out "joint efforts" for greater NATO involvement in the refugee crisis, saying both countries would seek the use of NATO's observation capabilities at the border with Syria and in the Aegean Sea.

In the meantime, Turkey is facing increasing pressure from the EU to open its border to 30,000 Syrians who have massed at the border in recent days, many seeking safety from the bombing of the city of Aleppo.

Speaking at Monday's press conference, Davutoglu said the border would be opened "when necessary," adding that the Russia-backed air strikes on Aleppo should not be tolerated with the idea that Turkey will accept the refugees.

Merkel said she had not just been appalled by the sitution in Aleppo but "horrified by what has been caused in the way of human suffering for tens of thousands of people by bombing - bombing primarily from the Russian side."

The Syrian city of Aleppo "is de facto under siege," Davutoglu said, adding, "We are on the verge of a new human tragedy."

Whilst Merkel met with the Turkish leaders on Monday, authorities confirmed that at least 33 migrants had died in two separate accidents as they attempted to cross the Aegean Sea to reach the Greek island of Lesbos.

Has the EU asylum system failed?

Dimitris Avramopoulos is the European Commissioner for Migration. His job description includes making the EU’s asylum system work - so far without great success. On this week’s Conflict Zone, he tries to explain why. (08.02.2016)

German Chancellor Merkel travels to Turkey to discuss new measures to manage the refugee influx into the EU. The meetings come as tens of thousands of refugees are hoping for asylum along the Turkish-Syrian border. (08.02.2016)