Turkey willing to open borders for Syrian refugees 'if necessary'

Turkey says it's reached capacity, but is prepared to let in the thousands of Syrian refugees trapped on the border. Ankara is facing rising pressure to open its borders to scores of people fleeing an assault on Aleppo. 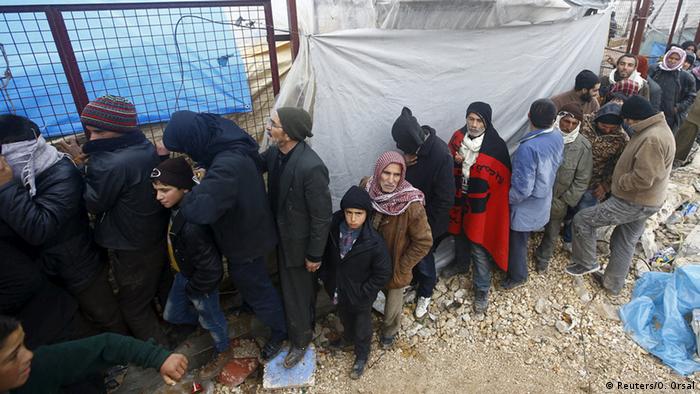 Turkish President Recep Tayyip Erdogan said Turkey stood ready to take in the large numbers of Syrians amassing at the border "if necessary."

Officials said more than 30,000 Syrians had spent the past few days waiting at the Azaz crossing after fleeing a major government offensive on the northern city of Aleppo.

"The regime has now blocked a part of Aleppo," Erdogan told reporters on his plane while returning from Senegal. "Turkey is under threat," he added.

"If they reached our door and have no other choice, if necessary, we have to and will let our brothers in," he said.

Turkey's Oncupinar border crossing in the Kilis province, directly north of Aleppo, nevertheless remained closed on Sunday. The governor of the province, Suleyman Tapsiz, said Turkey did not yet have plans to open the gates, except in an "extraordinary crisis."

He added that Turkey would provide aid to those displaced within Syria, and warned that Russian airstrikes and further gains by the regime's forces could prompt up to 70,000 more people to head for the Turkish border.

The Norwegian Refugee Council, which is working to deliver aid to refugees, said several camps on the Syrian side of the border were already full, forcing families to sleep out in the open in below-zero temperatures.

Meanwhile, Turkey's deputy prime minister, Numan Kurtulmus, told CNN-Turk on Sunday that his country had exhausted its "capacity to absorb" refugees, but would nevertheless continue to take them in. He said Turkey was already hosting a total of 3 million refugees, including 2.5 million Syrians.

At a meeting of EU foreign ministers and their Turkish counterpart in Amsterdam, EU foreign policy chief Federica Mogherini urged Turkey to open its borders to Syrians in need of protection. She said the EU aid already provided to Ankara "aimed exactly at guaranteeing that Turkey" had the resources to host new asylum seekers.

EU members have committed 3 billion euros ($3.3 billion) to help Turkey house and care for the refugees on its soil in a bid to reduce migratory flows toward Europe.

EU foreign ministers have pressed Turkey to keep its borders open as some 35,000 people attempt to flee Syria. Despite a deal with Ankara to house and care for Syrian refugees, a key border crossing remained closed. (06.02.2016)

The UN has said tens of thousands of people are stranded after fleeing renewed violence in the Syrian city of Aleppo. The development comes as the Assad regime began a new offensive in the besieged city. (05.02.2016)

German Interior Minister de Maiziere has said Europe must focus on reducing the number of migrants arriving on the continent. He has called for faster deportations of ineligible asylum seekers from Greece to Turkey. (05.02.2016)