Syrian government forces have taken back control of Palmyra. It means more than just a site of ancient culture has been recovered, writes DW's editor-in-chief Alexander Kudascheff. 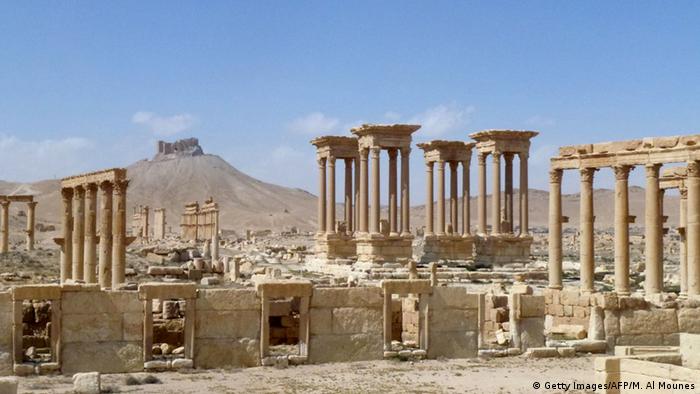 It is now obvious that "IS" military forces are in the process of withdrawing from Syria and Iraq. The ancient oasis city of Palmyra has been recaptured by Assad's forces. Symbolically and strategically, this is significant as Assad now can and must reach the heart of "IS" country, Raqqa. The Iraqi army is getting ready to storm Mosul. If it succeeds, then the territory held by the so-called "Islamic State" will diminish and be subsequently destroyed and defeated in the foreseeable future. That will not alleviate the risk of terror in Europe. The terror threat may even escalate as "IS" will be under so much pressure in its main territory and haven that it may lash out erratically. Only one this is sure: Military pressure is mounting on "IS", and the number of new recruits is falling.

The probable collapse of "Islamic State," the self-aggrandizing caliphate responsible for everyday savagery in the name of Islam, will initially be a blessing for the people suffering in Syria and Iraq. Assad's victory in Palmyra - backed by Russia - also will also shift the strategic weight in the region - for now. Assad has ultimately emerged as an undeniable force again - albeit by dint of Moscow's mercy, which can also quickly let him fall at will. Whoever wants peace, or at least an end to the war in the region, can no longer avoid Bashar al-Assad. It is harrowing for democratic Syrian opposition forces in exile but also a political reality. The man who is responsible for five terrible years of civil war, more than a quarter of a million dead people, torture and displacement, is once again playing a vital part in Middle Eastern power games.

The Russians now have even more bargaining power at the negotiation table. They have made the successful operations against "IS" possible and are not be willing to forfeit the prize for winning. That means, first off, that Assad will remain in office and then, the Russians - despite their economic woes at home - will once again be an influential party in the Middle East. Russia has not only achieved this because of its military foothold in Syria, but actually, because it is an opponent of the USA, which has withdrawn from the region since Obama's presidency and no longer seems to have any interests there. It is probably a fatal error, yet understandable in light of the Iraq war fiasco.

And the Europeans - are they busy with the refugee crisis? They will at least be seated at the negotiation table at the Syria talks. They will be willing to contribute financially and offer "soft skills" as well. But at best, they can only take part as a signatory power in a negotiated peace. Their influence is modest, if not negligible, in their neighboring region, which is significant in world politics. Paris and London have traditionally pursued their own policies in the Middle East, but now they stand on the edge of the action as onlookers, even though France has been militarily involved since the terrorist attacks in Paris on November 13, 2015. But they cannot be conceived as a force that will be rewarded with political influence.

Undeclared war between Sunnis and Shiites

In keeping with the current strategic situation, Assad is the winner in the battle against IS. Russians have gained influence again. Americans look on, despite the indefatigable John Kerry and the distraction of the presidential election campaign. The Europeans have a say, but they actually do not decide anything. IS stands before its demise yet Islamist terror will nonetheless go on - in Pakistan, Nigeria or Europe - and it will challenge society in the Arabic and Islamic world. Iran is successfully fighting for regional and Shiite dominance. Saudi Arabia, embroiled in a war in Yemen, is losing - at least for the time being. In other words, the undeclared war between Sunnis and Shiites continues.

Opinion: New Berlin refugee museum must be a place of reconciliation 18h ago