A Berlin-based research project has concluded that Russia and the Syrian regime are responsible for the majority of attacks on civilians in Aleppo. The project verified some 1,748 videos over a six-month period. 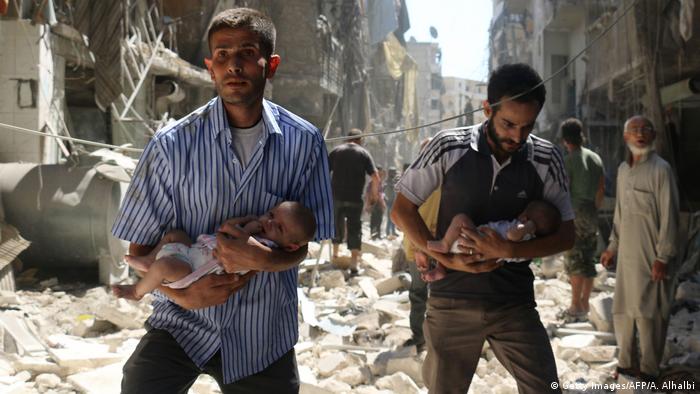 The Syrian Archive, a Berlin-based data collection project, published a new report on Tuesday that showed that the unlawful attacks on civilians in Aleppo in the second half of 2016 had mainly been perpetrated by Russian and Syrian forces.

Sifting through over 50,000 videos from the devastated city, the team of six - three of whom are Berlin-based volunteers working on top of day jobs - were able to verify some 1,748 videos of human rights violations in Aleppo and its surroundings.

"While attacks and violations have been committed by all parties, including the international coalition, Turkish forces, and rebel groups, the visual evidence analyzed in this report shows that overwhelmingly, Syrian and Russian forces were responsible for the largest amount of human rights violations in Aleppo city and suburbs during this period," said Hadi al Khatib, the project's founder, presenting the report in Berlin.

This is a bolder statement than the one made by the United Nations' Office of the High Commissioner for Human Rights (OHCHR) - in its report published on March 14.

The OHCHR report, which was based on interviews rather than video evidence, did not mention Russia specifically, preferring instead to say that "all parties to the Syrian conflict" continued to perpetrate "violations and abuses which resulted in civilian casualties or otherwise impacted the civilian population." Though the OHCHR did admit that the Syrian Air Force and "pro-government forces" were deliberately targeting schools and hospitals with airstrikes. 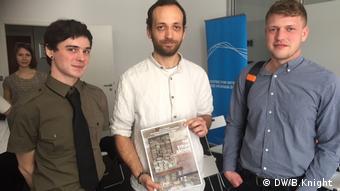 The Syrian Archive's analysis includes 1,260 videos of unlawful attacks, 240 videos in which illegal weapons were used, and 147 videos against "specifically protected" persons or places, such as hospitals or markets. Al Khatib, himself a Syrian who arrived in Germany in 2011, said he had no doubt that the latter attacks were deliberate, since a similar pattern had been seen in the town of Idlib.

"Through our analysis we have seen that overwhelmingly Russian and Syrian forces perpetrate the attacks - there were many more videos on that than on Turkish forces, or international coalition, or rebel groups," he said.

The report also showed that weapons known to cause particularly heavy civilian casualties - barrel bombs, cluster bombs, incendiary bombs, and chlorine gas - were being dropped from warplanes on residential areas, which is a war crime.

At the Berlin press conference, al Khatib and researcher Jeff Deutch used case studies to show the methodology by which the videos are verified. When an airstrike is filmed and posted online - usually on YouTube or Facebook - the team uses visible landmarks to determine where the attack took place, and then cross-references this information with time stamps and upload dates and satellite imagery taken from Google Earth. 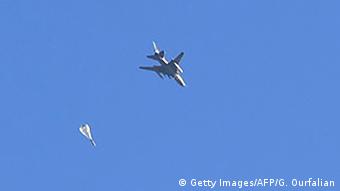 Then the researchers look for videos from the aftermath of the strike, showing munitions casing that offers clues about where it was made and what was in it. In one case, the researchers matched cluster bomb casings filmed in Aleppo to casings being loaded onto Russian war planes in footage broadcast by Russia's state-financed news network RT.

Sometimes civilians are visible on the videos. "This is very important," said Al Khatib. "Because if areas have been targeted because there is a military base, then this is not illegal - it is not a war crime. If there are civilians, and there is no military base there, then this is a different issue."

The project relies on a network of 300 trusted sources in Syria to provide the material. "Many of these people are people we have longstanding connections with, or have been publishing for a long time," said Deutch. On top of this, the archive gathers videos from news networks, security cameras, or simply people who happened to be near an attack and recorded footage on their cell phones. Though the report does note that "many if not all of these sources are partisan, and thus require caution with regard to their claims."

Since its founding in 2014, the Syrian Archive says it has provided material to a number of different international organizations, including Human Rights Watch, Amnesty International, and various United Nations agencies, including the OHCHR.

The videos and the methodology of the analysis have all been published on the Syrian Archive website, for use by journalists and lawyers, while the software is open source, so that the model can be copied elsewhere. Indeed, journalists from Afghanistan, Pakistan, and Iraq have already been in touch to create their own archive.

They were a happy family - until the Syrian war arrived in Aleppo. Rima A. decided at that point to leave her loved ones and her homeland. Now she lives in Germany and and tells DW her memories of the war. (16.03.2017)