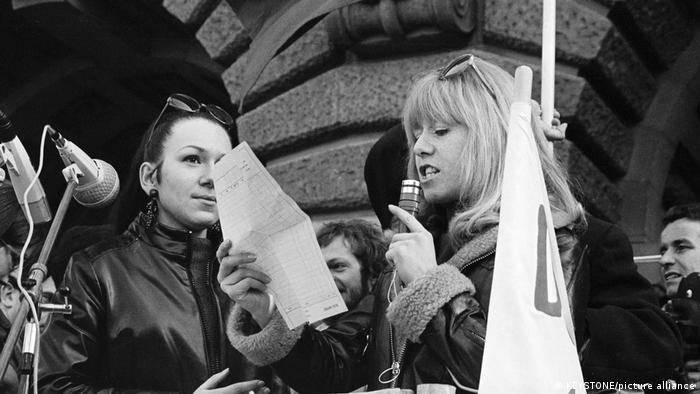 "For a long time, it was a part of the Swiss identity, that we are an ancient democracy. But this means that we are accepting, that only because men said that we are a democracy, we must be. This idea is gone now," says Zita Küng, one of the most influential Swiss feminist activists.

The myth that Switzerland is one of the oldest democracies in the world dates back to the Middle Ages, when men, even of lower status, enjoyed the freedom to meet at a yearly assembly and vote directly on various issues by raising their hand or their weapon.

The tradition lasted for centuries. But one crucial part was missing in this country that prides itself on its model of direct democracy — the female hand.

Discrimination sealed in the constitution

Women were largely absent from Switzerland's political life until 1971. It was one of the last countries in Europe to grant women the right to vote. Women in Finland were the first to be granted the right to vote in 1906, and in Germany women have been casting their ballots since 1918. What took Switzerland so long?

The simple answer is a lack of political will. "It was not the government. It was not parliament. It was the Swiss people, the men who were in a position to decide," Küng told DW. 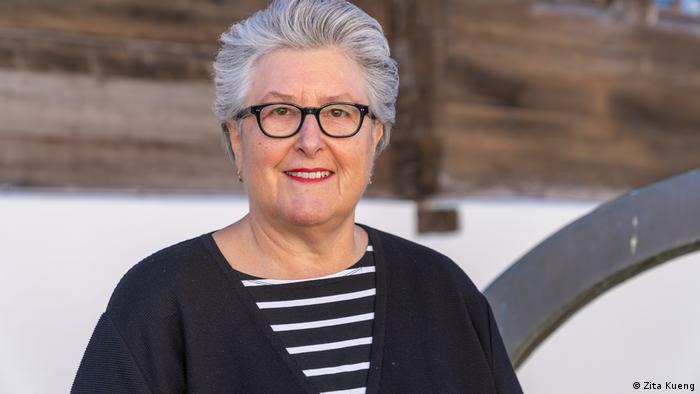 Zita Küng is one of Switzerland's most influential feminist activists

Küng, a 67-year old feminist activist, was born into a working class family in Zurich and was the first in her family to go to university. A teacher, singer and jurist, she was interested in women's issues from a young age. Küng was the co-founder of the Organization for the Cause of Women, one of the most important organizations of the women's movement. Today, she teaches at the "feminist faculty," which she co-founded and which offers seminars and workshops on equality.

She told DW that women needed a majority of Swiss men to accept a woman's right to vote. Their initial unwillingness to share their power with women had, however, deeper roots in Swiss conservative tradition.

Isabel Rohner, an expert on feminist issues and co-author of the book 50 Years of Women's Suffrage, said that traditionally Switzerland, similar to other countries, was based on a patriarchal system, in which public and private spheres were strictly separated. Politics and the military were a man's domain, whereas taking care of the household and family was the responsibility of women. 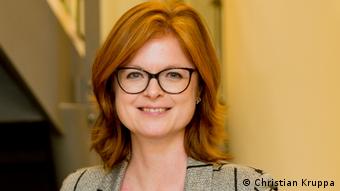 Moreover, the old Swiss constitution from 1848 granted only men the right to vote and didn't recognize women as part of public life. Rohner thinks the way the constitution was written was undemocratic.

"You can't talk about democracy when you're talking about a society where more than 50% are excluded from political participation and from legislation. Before 1971, the laws were made without taking women's interests into account, and in many cases, these laws were against women's interests," she said.

Louder voice of a new generation

In the 1960s, the suffragette movement started gaining traction. Change was slow and started on a local, cantonal level. Several cantons began allowing women to participate in politics, but many others were still strongly against it.

Several factors then influenced a historic change of the constitution. Globally, there was a climate of change, exemplified by the protests against the Vietnam War that were raging across the United States as well as the civil rights movement for Black Americans and the nascent environmental movement.

The sexual and cultural youth revolution was breaking the old social norms in search of a new way of life. In the late 1960s, Switzerland wasn't immune to those changes.

"There is a difference between rural areas and cities in Switzerland. The people in the cities were quite influenced by all those international movements," said Rohner.

On a European level, Switzerland was among the few countries left where women were still not able to vote, along with Liechtenstein and Portugal. 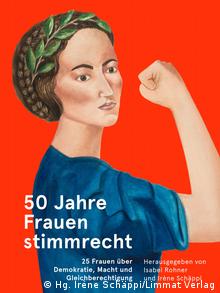 '50 Years of Women's Suffrage' was published to honor the jubilee

"Switzerland had more and more the problem of reputation because it was really embarrassing that Switzerland, which, as we always hear was one of the oldest democracies, didn't have women's suffrage," said Rohner.

And in the final years before the constitutional change, Switzerland was involved in formulating the European Convention on Human Rights. One of the preconditions was to grant women the right to vote, which was yet again denied by Swiss men.

This led to widespread protests in 1969, during which several thousand women gathered in the famous March on Berne.

"Women got up and made a big manifestation in Berne and that was the final event that showed men that this is a serious case. You will not escape anymore," said Küng.

"They were willing to show up, to be loud, and show that they were really angry," said Rohner. She added that the new generation of women suffragettes were louder and more radical in their decision to change the minds of Swiss men.

In 1971 they finally succeeded. In a historic referendum, the majority of Swiss men granted their wives, daughters, sisters and mothers the right to vote at the federal level. The last conservative stronghold was the small canton of Appenzell Innerrhoden, where men refused to concede until they were forced by the Federal Court to grant women the right to vote in 1991.

But for Zita Küng, getting the right to vote was just the beginning.

Küng was active in campaigns where women fought to change the controversial marriage law, under which married women weren't allowed to have their own bank account, had to ask their husbands for permission to work or sign contracts and documents, and were not able to choose where they could live. Rohner called the law "a form of slavery, where married women lost their civil rights." 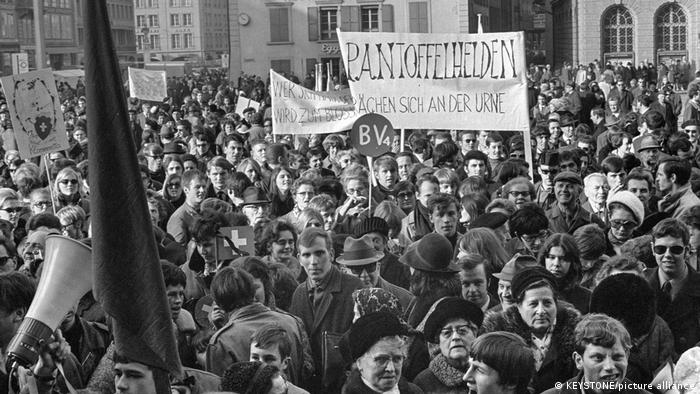 In 1969, thousands of women gathered to demand the women's right to vote

The new marriage law that granted women an equal marital status is seen as one of the key milestones in the historical fight for women's rights. The movement, with Küng at the forefront, then worked on initiatives for the right to abortion in the first 12 weeks of pregnancy, and access to birth control pills without prescription. The fact that women were allowed to vote enabled them to vote in favor of other civil rights.

What about women in Switzerland today, 50 years later? In 2019, hundreds of thousands of Swiss women inspired by the new #MeToo movement took to the streets to protest gender inequalities, such as the gender pay gap, unpaid household work and lack of government representation. Although the women's rights movement had major historical successes in many political and civil aspects, Switzerland was still lagging behind many European neighbors when it came to gender equality. 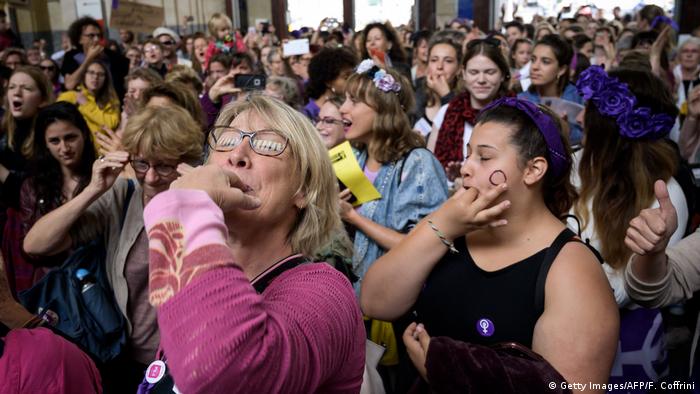 Swiss women protested for gender equality in 2019 in Lausanne

Today, for Küng, old-age poverty in women is one of the biggest concerns.

"It's just a scandal that a country like rich Switzerland condones that when women get old, that they actually have to receive social assistance", she said.

Another significant issue is sexual violence against women.

"This is basically a cultural question and the paradigm has to be changed. We have to stop talking about women fighting back, we have to start talking about men renouncing violence. It must become clear, even in the upbringing of the boys that a good boy is one who does not use violence," she said.

She pointed out that the coronavirus pandemic has been far more demanding for women than it has been for men. Women traditionally not only work but take care of the household as well. Working from home while homeschooling adds to the pressure. Nursing jobs, which are essential in a pandemic, are traditionally also women's jobs — and still poorly paid in Switzerland.

Rohner said Switzerland still has "structural inequality in nearly every sector in politics, in the economy and in society as a whole."

But the expert said Switzerland is also an example that positive change is possible. In the last several years, female representation in politics has significantly increased to 42%, a higher percentage than in Germany. The gender pay gap, though still high at 8%, has also reduced over the years.

For Rohner, 50 years of women's right to vote in Switzerland is a big anniversary and a good moment to reflect on "50 years of Swiss democracy" and the importance of political participation.

Swiss activists and union members took to the streets of Bern to demand equal pay for women and more transparency from companies. A possible one-day women's strike, similar to the one held in 1991, is on the cards.

In Switzerland in 2019. women went to the streets to protest a range of gender inequalities.