Swiss activists and union members took to the streets of Bern to demand equal pay for women and more transparency from companies. A possible one-day women's strike, similar to the one held in 1991, is on the cards. 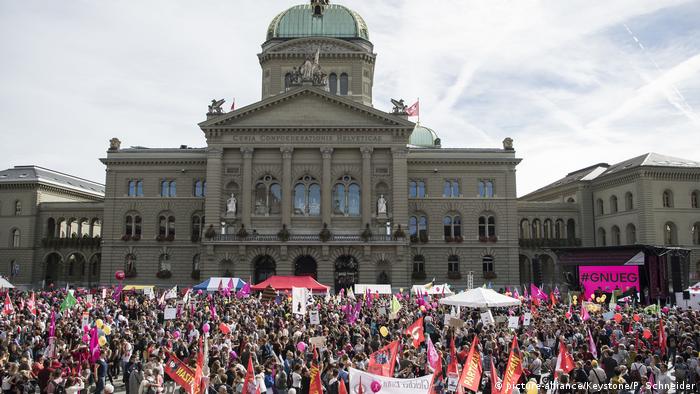 Organizers estimated that some 20,000 people marched through the streets of the Swiss capital, Bern, to protest the gender pay gap in Switzerland on Saturday. Police confirmed that "many people" took part, but did not release its own estimate, according to the local Berner Zeitung.

The weekend rally comes as the lower house of the Swiss parliament prepares to debate on Monday legislation that would make companies' payrolls more transparent. The move, pushed by the government, is aimed at closing the gap between women's and men's wages in the rich European country.

Women "are sick of sexism and discrimination, sick of wage inequality," Switzerland's largest union, Unia, said in a statement cited by the AFP news agency on Saturday.

"Enough is enough — 37 years of snail-pace changes and we still do not have wage equality," the union posted on Twitter.

According to the numbers provided by the government, women in Switzerland take home 18.1 percent less in wages than men across the board. Most of this difference can be explained by varying levels of experience or qualifications, and varying wages in different sectors. However, even with all these factors accounted for, women still get 7.4 percent less than men.

"Even if you take into account all of the regular excuses and you only compare women and men in the exact same positions with the same professional experience, the fact remains that a woman in Switzerland is cheated out of 300,000 Swiss francs ($313,000, €266,000) over the course of her career, just because she is a woman," said Unia's representative Corinne Scharer.

The change in law originally called for all companies with more than 50 employees to provide data on wage equality for verification every four years. In May, however, the upper house of parliament watered down the initiative, saying the bill should only apply to companies with over 100 workers.

Many activists urge a much stricter version of the bill, which would apply to companies with over 25 employees and would fine discriminating employers and compensate the workers.

If these demands are not met, Unia and many other organizations warned they would stage a one-day "woman's strike" next year. The event, set for June 14, 2019, would come exactly 28 years after a 1991 walkout, when hundreds of thousands of women left their places of work to demand for more equality in the workplace.