Switzerland is one of the lowest-ranked countries in the West in terms of wage equality. Public workers in Zürich have disputed that supporting the strike violates political neutrality laws. 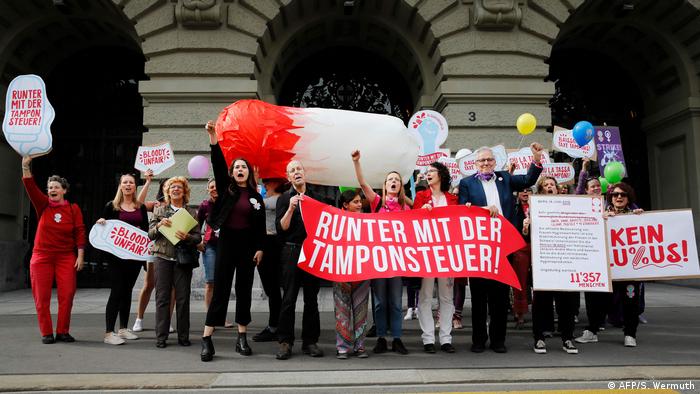 Women went on strike across Switzerland on Friday, demanding an end to an equality gap that is far wider than in many other western European countries. It was the first such demonstration in 28 years.

According to organizers, an unprecedented hundreds of thousands of women took to the streets in many towns and major cities including Zürich, Geneva, Basel, and Lausanne. In the capital Bern, female lawmakers also joined the movement

The demonstrations took many different forms across the country. In Lausanne, women lit a "bonfire of joy" to kick off the event overnight, while in the financial capital Zürich protestors wheeled a giant, pink clitoris through downtown.

"Wages, time, respect," was the overarching motto of the strike, organized to highlight the barriers women in Switzerland, particularly immigrant women, face on a daily basis.

The Global Gender Gap Report put out every year by the World Economic Forum (WEF) ranks Switzerland 20th in the world, not only far below the Scandinavian countries in the top spots, but also well under next-door France (12th) and Germany (14th).

According to the WEF report, Switzerland is 44th in wage equality, and a mere 59th when it comes to the share of positions, especially top positions, in politics and business.

"One of the major differences between men and women in the workplace has to do with parental leave," said Desiree Millet, a schoolteacher who lives and works outside of Zürich. "Women are allowed 14 weeks off, but men get nothing, so if you add to this the many family responsibilities it's assumed women will carry out, many employers just decide that it's not worth it to hire women."

The fact that the cost of living in Switzerland, especially in Zürich, is among the highest in the world exacerbates this problem, she says: "The cost of childcare is so exorbitant that unless both partners are earning high incomes, it makes more sense to stay at home, because you can't work part-time in many professions. So, of course, this is expected of the mother, not the father."

Millet told DW that she would like to join in the strike, but school teachers, despite belonging to a highly female-dominated profession in Switzerland, are forbidden from going on strike. This is because schools, the government has argued, are public institutions and the strike violates the strict neutrality rules governing public organizations in Switzerland.

A school in the Wiedikon area of Zürich was forced by the city government to ditch its banners supporting its mostly female workforce. A banner reading "112 women work here" was removed on Thursday and its two headmistresses admonished by local politicians.

"Wage equality between men and women is an important topic," the district's representative in the city government, Patrice Martin Zumsteg, told the Neue Zürcher Zeitung daily. "But as a citizen … it is important to me that school leadership maintains the obligatory political neutrality of public schools."

Zumsteg, a conservative, had his point echoed by the nationalist People's Party on Wednesday, who accused the teachers of spreading "propaganda material."

But many women, including Millet, dispute the idea that asking for equality with men is the same as taking sides in politics.

"In regions where the government and politicians have already announced a desire to implement wage parity, women should be allowed to call attention to the fact that it hasn't happened for them yet," she says.

School principals Lilian Hurschler and Barbara Meier told the Neue Zürcher Zeitung they were shocked by the accusation that their banners were political.

"We've had only positive reactions from students and parents," the pair said, adding that the banners were the idea of the entire team.

"There are so many women working at our school that we thought we must do something."

Switzerland famously did not fully establish women's right to vote until 1971, and although gender parity was enshrined in its constitution a decade later, studies suggest that parity is still decades away from being a reality.

Dozens of cities across the world have declared a climate emergency. Now, students behind the school climate strikes are bringing the movement to Switzerland and Germany. But what does that mean exactly? (29.04.2019)