The German Chancellor's approval rating has risen as much as nine points, according to the latest DeutschlandTrend poll. The survey also found most Germans do not believe in a European solution to the refugee crisis. 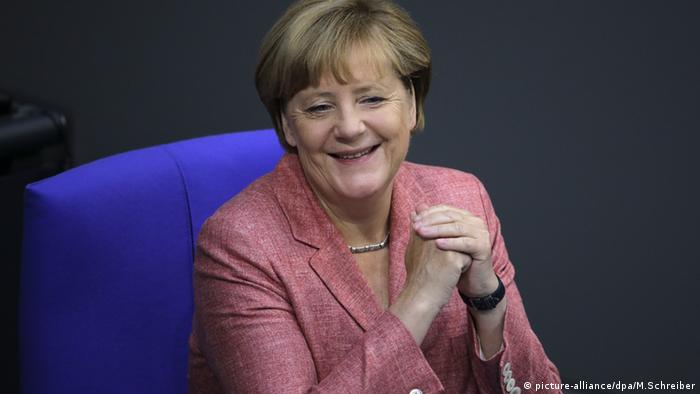 Despite facing criticism at home for her refugee policies and months of lowered approval ratings, the latest Deutschlandtrend poll found that public opinion has shifted positively for German Chancellor Angela Merkel.

Fifty-four percent of the poll's respondents said they were very satisfied or satisfied with Merkel's political performance, placing her in third place.

Germany's most supported politician is Social Democrat Foreign Minister Frank-Walter Steinmeier, with 75 percent saying they were very satisfied or satisfied with his performance. Finance Minister Wolfgang Schäuble came in second place at 63 percent.

Bavarian State Premier Horst Seehofer, from the CSU - Bavarian sister party to Merkel's Christian Democrat CDU - dropped seven points in the polls with 37 percent of respondents saying they were very satisfied or satisfied with his political work. Seehofer has taken a harder line on migrant numbers, calling for a limit to be imposed.

It remains to be seen whether there has been a widespread improvement in Merkel's approval figures, with the latest ratings appearing to contradict those from several other recent surveys.

No European solution for refugee crisis

In light of the referendum in Hungary against EU refugee quotas, wherein 98 percent rejected EU-wide refugee distributions - questions have been raised about whether or not a Europe-wide solution is possible, or if individual states should decide about refugee distributions for themselves.

Almost two thirds of Germans do not believe a Europe-wide solution to the refugee crisis is realistic, according to the DeutschlandTrend survey.

In terms of integrating refugees at home, 98 percent of German respondents believe German language courses should be a priority in the integration of refugees, followed by integrating refugee children in schools and teaching German values.

Germany has faced a recent uptick in right-wing violence, including two bomb blasts last month in Dresden outside of a mosque and on the terrace of the International Congress Center. No one was injured in the blasts, but police suspect a xenophobic motive.

The DeutschlandTrend survey found that a large majority - 84 percent - of Germans believe the threat of far-right violence poses a great danger. Comparatively, only 68 percent of the respondents thought the threat of Islamist attacks were a great threat.