Hungarians have overwhelmingly rejected the EU's refugee quota plan in a referendum. However, less than 50 percent of the country's 8 million eligible voters have participated in the poll, rendering it invalid.

Citizens in Hungary have voted in a controversial referendum to reject the European Union's plan to distribute migrants across the bloc. However, data from the National Election Office's special referendum website suggest the number of voters was less than 50 percent, invalidating the result.

According to the National Election Office, more than 98 percent of voters rejected the EU's migrant quota, while just 1.67 percent voted in favor of it.

Speaking after the results were announced, Prime Minister Viktor Orban said the results needed to be taken into account by EU decision-makers.

"Thirteen years after a large majority of Hungarians voted at a referendum to join the European Union, today Hungarians made their voices heard again in a European issue," Orban told a news conference in the capital, Budapest.

"We have achieved an outstanding result, because we have surpassed the outcome of the accession referendum," he added. He said he would submit an amendment to Hungary's constitution based on the plebiscite. 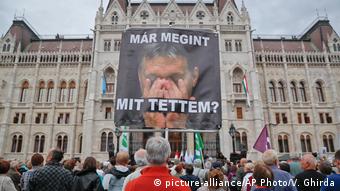 Opposition members protested in Budapest, holding a poster of Orban that read "What have I done again?"

Before results were announced, Orban said there would be "legal consequences" regardless of the outcome of the poll. "A valid referendum is always better than an invalid one, but the legal consequences will be the same," he said. "There is only one condition for this: that there are more 'No' votes than 'Yes' votes," he added.

Opposition parties and rights groups had called on Hungarians to boycott the referendum, which was organized by Orban to whip up support against the EU's planned quota to distribute refugees across member states.

Eastern European countries, including Hungary, Slovakia and Poland, have vehemently opposed accepting migrants. Hungary has refused to accept even one of the 1,294 refugees allotted to it and has instead filed a legal case against the EU, together with Slovakia.

Sunday's referendum asked whether refugees should be sent to Hungary without parliament's approval. Prime Minister Viktor Orban reached out to Roma in an attempt to reach the 50 percent threshold to make the vote valid. (02.10.2016)

On Sunday, Hungarians will vote on an EU-wide distribution of refugees. One thing is clear: the isolationist stance in the country is spreading. That's exactly what the government wants. (02.10.2016)