Sunday's referendum asked whether refugees should be sent to Hungary without parliament's approval. Prime Minister Viktor Orban reached out to Roma in an attempt to reach the 50 percent threshold to make the vote valid. 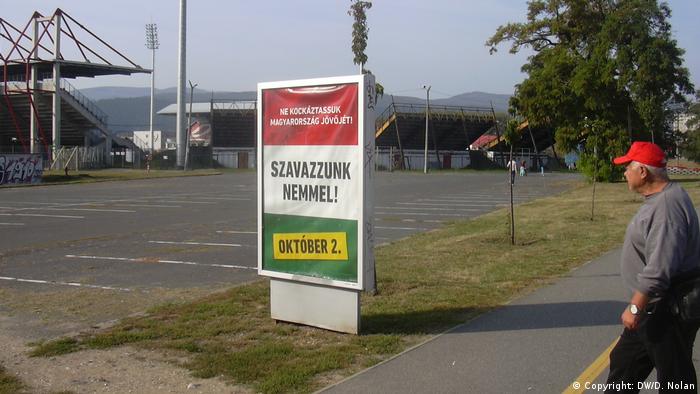 "We have all voted no," a group of people told DW outside a polling station on referendum day in the Roma ghetto of Miskolc, a rust belt town in eastern Hungary.

"They are very dangerous: They are going to take our jobs, and we heard they are raping young Hungarian girls in Budapest," 18-year-old Sandor said, repeating a common Hungarian fear of refugees. "We got our information from a flyer that told us that they are planning to move thousands of migrants to Avas." The group nodded in agreement, ironically consenting to an earlier scheme that relocated Roma to the tower blocks on the edge of town.

Hungarian Prime Minister Viktor Orban has made his anti-refugee stance his cornerstone policy. However, after struggling to mobilize voters for Sunday's referendum, he reached out to Roma leaders in an attempt to reach the 50 percent threshold required for the vote to be valid.

A key backer has been Attila Lakatos, Miskolc's self-styled 21st-century "vajda," a Roma title that harks back to the feudal era. Lakatos has developed strong links to the Fidesz party, and frequently uses the term "Gypsy crime," employing arguments against foreigners that had previously been used against his own ethnic community.

"The immigrants could do the same jobs as we do because they are just as uneducated as we are," Lakatos warned in a statement in support of Fidesz's campaign. "We let our children go to the school freely (on their own) because nobody bothers them," he added. "If the immigrants came, we would have to worry about our daughters, wives and family, because nobody would be safe."

In the midst of projections of an inadequate voter turnout on Sunday, Lakatos told DW that "the share of 'no' votes will be at least 60 percent, so that will be a clear message from the Hungarians. We don't want migrants in Hungary, because we will not get our fair share of welfare, and also they are going to apply for the same jobs as us, so we really don't need that in our lives right now."

"We have coexisted with Hungarians for 600 years, and we don't want to endanger that," Lakatos said, echoing Orban's rhetoric. "Therefore, I think even two migrants is too much, because then - as we have seen in Western Europe - that brings with it the danger of terrorism for generations.

"We Gypsies get angry easily, so if there is a conflict between migrants and us, it will be a real conflict," Lakatos said.

"A total of 147 minority Roma government leaders signed our statement condemning the migrant quotas and calling for people to vote no, so that is a significant majority of Roma," he added.

Not all Roma leaders have taken Orban's line. Bela Lakatos, the mayor of Acs, in northern Hungary, shares a surname with the vajda of Miskolc, but little else. Lakatos brought food and water to migrants in Hungary at the height of the crisis last summer, and has now collected the support of 40 fellow Roma mayors around Hungary in opposition to the vajda's pronouncements.

He told DW that Orban's campaign has released dangerous emotions in the Hungarian population. "Most people now think that migrants are some three-headed aliens with four arms who will rape all the women and will destroy everything, so this kind of hate should not be amplified as it could really hit back on the Roma later," Lakatos said. "Hungary shows no tolerance for the oppressed. Government or society does not even show minimal tolerance of the poorest or the weakest: On the contrary, the government even amplifies such aversions."

"Moreover, we have spent billions of forints of public money on all this," Lakatos said. "I will not even attend the referendum, as I am not prepared to answer stupid questions." 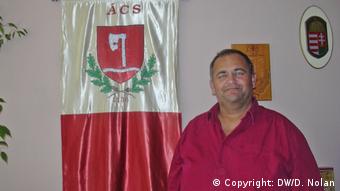 DW learned from three credible independent sources that Orban has also used the referendum to impose party discipline ahead of the 2018 general election: Fidesz party constituency leaders who failed to achieve a threshold set by the prime minister, thought to be 45 percent, can expect to be replaced.

Orban seemed resigned to failure on Sunday. Exiting a Budapest polling station in the morning, he said that "we are proud that Hungary is the first country to vote on this issue," but added that the real question would not be the turnout but the result - and if that were to support "no," there "will still be legal consequences."

Whatever those consequences, Hungary's coffers have been damaged by Orban's anti-migrant drive, which earlier this week was estimated to have cost taxpayers 50 million euros ($56 million) - more than the Brexit and Brexin campaigns combined.

"Fidesz really thought the harsher the tone the better," Robert Laszlo, the election specialist for Budapest-based think tank Political Capital, told DW. "They ran a really harsh campaign from June, even at halftimes in the football Euros and during the Olympics, and we will see if it was helpful for turnout."

"All of us have envy, all of us have fear, and if the government can make people believe that the migrants can take away their jobs, are all terrorists and will kill our culture, even those with very few possessions can become afraid that they can lose them," Laszlo said.

State media rallied to mobilize support for Orban on Sunday afternoon, broadcasting from Belgrade with "news" that "migrants were ready to enter Hungary on beneficial result" after the publication of an unexpectedly low turnout rate of 23.6 percent at 1 p.m.

In the end, however, the extreme nature of the campaign appeared to have alienated many moderate voters and failed to garner enough support for the result that Orban had so desired.