Sunken oil tanker: How to protect the high seas environment? | Environment | All topics from climate change to conservation | DW | 15.01.2018

An Iranian oil tanker that sank in the East China Sea is prompting fears of damage to marine life. Why do oil spills keep happening and who is responsible when they're in international waters? 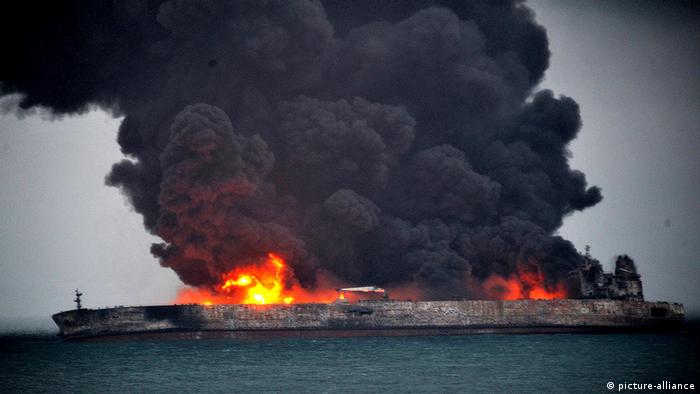 The Iranian oil tanker Sanchi caught fire and sank this past Sunday in the East China Sea, eight days after a collision with a cargo ship, due to unclear causes. Its 30 crewmen are missing, with few chances of survival — and fears of environmental harm have spread.

By now, the tanker has left four oil slicks covering a total of 101 square kilometers (39 square miles), according to the Chinese State Oceanic Administration. China's Ministry of Transport has also now reportedly located the sunken tanker.

High seas are often a source of controversy when it comes to protecting marine wildlife and ecosystems. A lack of strong international regulations in waters outside national maritime boundaries — which cover half of the planet's surface — results in many grey areas.

While oceans cover over 70 percent of the Earth's surface, only about 5 percent of the world's oceans are protected, and very little of these protected zones consist of open ocean, according to the United Nations.

At the end of 2017, the UN started a process to implement a new rule book by 2020, to establish marine catch quotas and conservation areas, among protective measures.

Until this is finalized, a lack of accountability on the high seas remains the reality, leaving largely unattended the problems of illegal fishing or ocean plastic pollution.

"This accident reminds of the importance of learning lessons to increase safety and environmental protection measures," Paul Johnston, head of the science unit for Greenpeace International, told DW.

Experts point out that it is too early to assess the full environmental impact of the accident, but it is expected to be relatively low compared to past oceanic oil spills.

The cargo was carrying light crude oil — or condensate — which is particularly volatile and highly flammable. When burned off, it can easily evaporate into the air, instead of remaining on the water surface like crude oil spills do.

If the ship had been carrying heavy crude oil instead of condensate, the collision could have led to one of the biggest environmental disaster on the high seas. Sanchi's cargo was four times larger than the heavier crude that leaked from the Exxon Valdez in 1989.

However, it is not yet clear how much condensate has burned off or even how much has spilled, not to mention possible consequences for fish species consumed by people, Greenpeace warns.

Stephan Lutter, a marine protection expert with WWF Germany, has already called it an "environmental disaster."

Condensate is colorless and breaks down quite quickly, along with being partially water-soluble. This could make the cleanup process more difficult. In addition, condensate has toxic components such as hydrogen sulfide, which cause air pollution when burned.

The oil would take at least three months to reach land, the UK National Oceanography Centre first said. But latest predictions show that polluted waters could reach Japan within a month and the Greater Tokyo Area within two months. This may affect many more people and human-related activities — such as fisheries — than thought.

All international ocean-going ships are required to get insurance under the International Convention on Civil Liability for Oil Pollution Damage, a regulation implemented by the International Maritime Organization (IMO) after the Torrey Canyon disaster in 1967.

This is supposed to ensure adequate compensation for oil pollution damages and cleanup costs, among other coverage, Nele Matz-Lück, director of the Walther Schücking Institute for International Law, told DW.

"The problem is that there is damage to the marine environment that we cannot put in numbers, such as the impact on fish or birds," Matz-Lück said.

Potential criminal responsibility is also supposed to act as an incentive for people to avoid environmental harm. "There is a well-established legal framework surrounding governance on and of the high seas, based on the United Nations Convention on the Law of the Sea," IMO's spokesperson told DW.

But the reality is that on the high seas, only the criminal laws of the flag state apply, and the international community is powerless to bring those responsible for environmental crimes to justice.

Matz-Lück explains that this motivates some ship owners to choose a flag of convenience — that is, to register their ship in a state with low enforcement, for example Panama or Liberia.

"This means that when operating in international waters, there is a grey area regarding who is responsible," Johnston said.

No conclusions have been drawn yet for the East China Sea incident.

The UN Convention on Biological Diversity expects to protect at least 10 percent of the world's coastal and marine areas by 2020.

"We've seen a trend of increasingly tight regulations regarding high seas for the last decades," Johnston said. "But there is still a very great need of further protection in the high seas."

This is the only path for a reducing oil spills that could impact the high seas environment, as well as other harmful activities, from illegal fishing to plastic pollution, Johnston believes.

"As long as [oil] cargos exist, such accidents will keep happening — but they can be largely reduced through stronger regulations," Johnston believes.

In the North Sea, for instance, safety measures such as the use of traffic separation schemes or double-hulled vessels have been successful in reducing accidents and thus environmental impacts.

IMO points out that shipping is already subject to strict regulations to limit negative environmental impacts, covering areas such as management of sewage and garbage, pollution prevention, or secure transport of potentially hazardous cargos.

"One way to achieve better protection is to ensure that these existing measures are stringently implemented and enforced," IMO's spoekesperson said.

But some powerful countries have no interest in closing the legal loopholes of the open ocean.

"There is no strict regulation on the transportation of oil by vessels, for instance, because states have an economic interest on it," Matz-Lück points out.

The explosion of the Deepwater Horizon drilling rig in 2010 caused an environmental disaster. But an oil spill like that could happen again, scientists say. Will they be able to prevent worse in the future? (24.02.2017)

The very vessels that ship many of the items we buy in store or online — furniture, car parts, even our underwear — are guilty of polluting the world's oceans with oily wastewater. A DW investigation reveals how seafarers circumvent environmental laws to save time and money, with devastating effects for ocean ecosystems.