The legacy of Deepwater Horizon: What researchers learned about oil spills | Environment | All topics from climate change to conservation | DW | 24.02.2017

The explosion of the Deepwater Horizon drilling rig in 2010 caused an environmental disaster. But an oil spill like that could happen again, scientists say. Will they be able to prevent worse in the future? 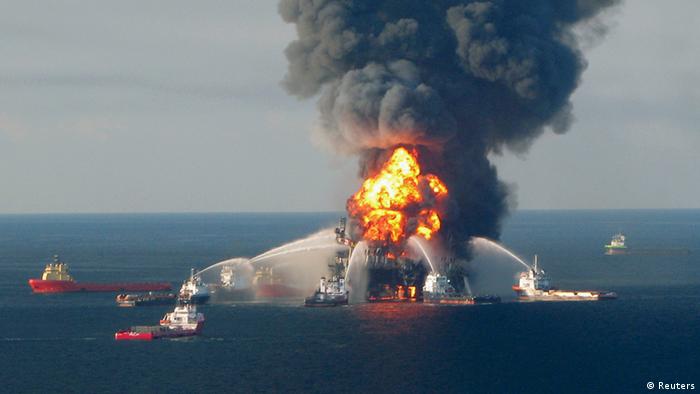 21 April 2010: Fireboats battling the blazing remnants of the oil rig

The search for crude oil has become increasingly desperate. As easily-accessible sources run dry, more challenging oil springs are being sought out - including ultra-deep wells in the ocean.

But what if something goes wrong?

The Deepwater Horizon disaster was a terrible example of the environmental devastation that can be caused through deepwater drilling.

On 20 April 2010, BP's mobile offshore drilling rig exploded in the Gulf of Mexico, 41 miles off the Louisiana coast. It resulted in a massive offshore oil spill.

Until the well could be sealed five months later, 780 million liters (210 million gallons) of crude oil leaked into the gulf, polluting ocean and coastal ecosystems and killing marine mammals, fish and seabirds in large numbers.

"It was a seminal event that changed our thinking forever about drilling," said Nancy Kinner, director of the Coastal Response Research Center at the University of New Hampshire, speaking in Boston.

Researchers had come together at the annual meeting of the American Association for the Advancement of Science (AAAS) to discuss what they had learned from the Deepwater Horizon disaster.

"We are going to leave a legacy of science that is useful for the next time - and there will be a next time," said Steven Murawski, of the College of Marine Science at the University of South Florida.

Scientists agreed that accidents and oil spills will occur as long as we continue to drill for crude oil under such difficult conditions. But the question was, how can we contain the worst effects of such an incident?

Nearly $1 billion has been invested into scientific research covering the Deepwater Horizon accident and its consequences, coordinated by the Gulf of Mexico Research Initiative.

When the rig exploded in 2010, it was drilling at a water depth of about 1,500 meters ( 5,000 feet). Nobody knew at that time how the leaking oil would spread and where it would end up, Schlüter explains. 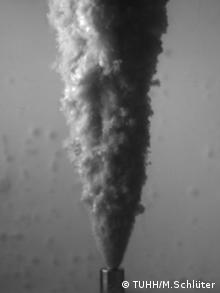 Oil spilling under water in the lab

Now, Schlüter and his colleagues have developed models to quickly calculate exactly that.

"We can predict how the oil spreads, if it will dispose in the sediment of the ocean floor, or if it will float to the surface, and on which coast it might be washed up," he said.

Scientists will only need a few data to feed into their model, for example, the type of crude oil, the water depth of the leakage, pressure loss at the vent and how much natural gas the crude oil contains.

Schlüter points out that oil companies should be forced by law to keep track of those data and release them as soon as possible if an accident occurs, so that scientists can get to work. Up-to-date data on ocean currents, which are also needed to be fed into the model, are already recorded and published.

Keeping such detailed data, means that scientists might even be able to change the course of events at a future oil spill, Schlüter claims. By knowing how the crude oil behaves in the water, they could apply measures to change that behavior.

For example, they could get the oil to collect at different water layers, which will transport the pollutant away from coasts, wetlands and other sensitive ecosystems.

"It is like riding a balloon," explained Schlüter. "You are not able to steer but you bring your balloon in the airspace which has the right wind direction."

Scientists can also make the crude oil sink to the ocean floor - the preferred option given that natural bacteria are then able to degrade the oil quickly.

The secret to changing the oil's behaviour and its route in the ocean is the size of the oil droplets and the amount of natural gas which is dissolved in the crude oil. With this information, together with data on the water depth, they are able to determine the oil's density and thus, how fast it will rise to the ocean surface.

In contrast, when particles from dead plants or marine organisms stick to the oil, it sinks. 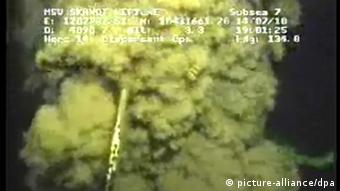 After the Deepwater Horizon explosion, 7 million liters (1.84 million US gallons) of Corexit oil dispersant was applied in the Gulf of Mexico.

Dispersant emulsifies oil into tiny droplets, making it sink or preventing it from floating to the surface in the first place. However, if applied without need, those substances simply add to the chemicals distributed into the ocean.

US Airforce planes sprayed Corexit onto the crude oil slick, while BP, for the first time ever, injected the chemical 1,500 meters underwater at the site of the leakage.

Researchers are still not sure if the Corexit did any good in dispersing the oil in the case of the Deepwater Horizon accident. "There are a lot of studies on that and they conflict with each other," said Steven Murawski. "We still have to sift through all that dirt."

Meanwhile, the damage to biodiversity itself, it seems, depends on the species. For some animals, the dispersant seems to have caused more harm than the oil itself.

Engineer Schlüter points out that according to their models, injecting huge amounts of Corexit was probably unnecessary: the oil droplets were already small enough. The scientists' model might predict at future oil spills if applying dispersant would help or not.

Be careful where you drill

The Deepwater Horizon disaster might seem like the worst that could have happened - but actually it wasn't, Schlüter says. Much of the crude oil sank to the ocean floor - a good thing. Plus, the bacteria biodegraded the oil much quicker than anticipated.

"There already is a lot of oil dispersed in the Gulf of Mexico from natural seeps and previous spills," Schlüter explained. "That's why there are already a lot of bacteria which live from decomposing oil and they grow even more quickly in the case of such an accident."

This, however, will probably not be the case in other regions of the world. So, an accident like at Deepwater Horizon might have an even worse impact on the environment if it happens elsewhere - in the Arctic, for example.

Scientists and their computer models might be able to prevent the worst at future oil spills. But it might be even better to think more carefully about where drilling should be allowed in the first place

British energy giant BP will pay a record fine to settle claims for damages stemming from the 2010 Gulf of Mexico oil spill. The agreement was reached with the Department of Justice and five US states. (05.10.2015)

The energy giant has announced a multi-billion-dollar settlement, potentially ending years of legal fighting over the environmental damage and human suffering caused by the worst marine oil spill in US history. (02.07.2015)

One year ago, an explosion on BP's Deepwater Horizon platform caused a four-month-long oil spill, the worst in US history. The communities and economy of the Gulf Coast are still suffering from the consequences. (20.04.2011)

Movie on the research of the Gulf of Mexico Research Initiative

Black tide in the Gulf of Mexico