A study has found that migrant labor from within the European Union will fall short of the economy's needs. To plug the gap, Germany will need 146,000 workers per year from non-EU countries. 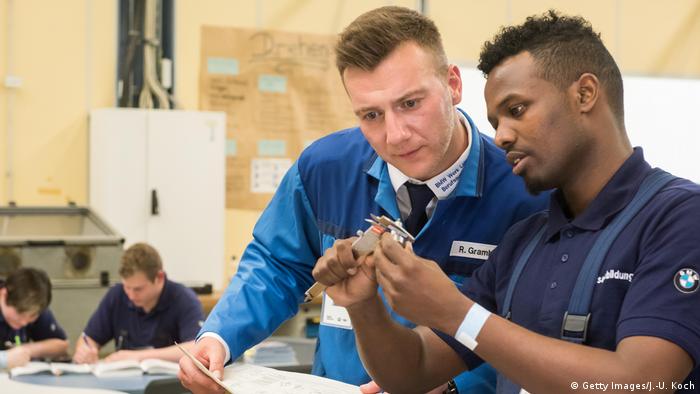 Germany needs at least 260,000 new migrant workers per year until 2060 in order to meet labor shortages caused by demographic decline, according to a study published on Tuesday.

Of that number, 146,000 people each year would need to immigrate from non-EU member states, the research published by the Bertelsmann Foundation said.

Due to an aging population, the labor force in Germany is estimated to shrink by a third, or around 16 million people, by 2060 without immigration. Absent immigration, the labor shortage could have a devastating impact on world's fourth largest economy.

Under the calculated scenarios, the researchers assume that the birth rate is rising, more women are working and that the pension age is increased to 70.

The study estimated that 114,000 people would immigrate from other EU countries, but that demographic factors and economic convergence within the 28-member bloc would reduce the incentive for workers to settle and work in Germany.

Jörg Dräger, the executive director of the Bertelsmann Foundation, pointed out official numbers showed that only 38,000 workers came and stayed in Germany in 2017.

The findings of the study suggest Germany needs to rapidly adopt immigration laws to attract medium and high-skilled workers as well as develop more robust integration programs, he said.

The study was conducted by the Institute for Employment Research and the University of Coburg.

The average number of job seekers in Germany was lower in 2018 than at any time since reunification in 1991, the Federal Labor Agency has said. Welfare numbers have also dropped, though the system is still controversial. (04.01.2019)

If you need a skilled tradesperson in Germany you may have to wait a long time, because while the sector is growing there is a shortage of workers. Refugees may be one solution to the problem. (17.09.2018)