Hundreds of thousands of new jobs in Germany are being done by workers from Eastern Europe, according to government figures. Employment figures in July were 700,000 higher than in the previous year. 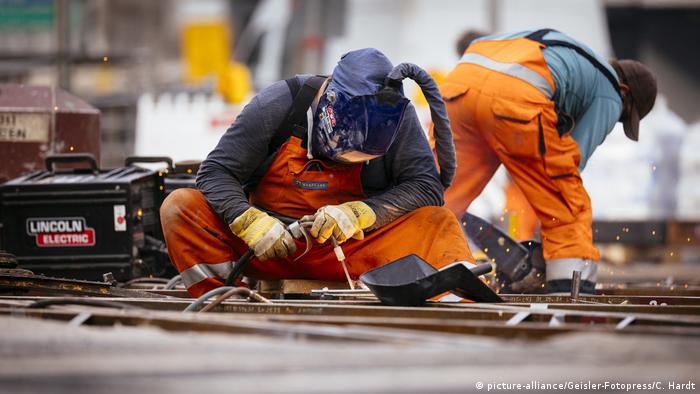 Every second job being created in Germany is being filled by a foreigner, according to  Federal Employment Agency (BA) figures.

The number of people registered as employed in July was 700,000 more than in the previous year, the Frankfurter Allgemeine Sonntagszeitung reported, using the BA figures.

In total, there are currently about 1.5 million registered employees from Eastern Europe working in Germany, including 422,000 Poles and 349,000 Romanians.

Only 614,000 people from Greece, Italy, Portugal and Spain are employed in Germany.

Labor Minister Hubertus Heil told the newspaper: "Without free movement enjoyed by workers in Europe, we would be put in much more of a tight spot for certain occupations."

Heil praised a recent draft law to update Germany's immigration law. "The law represents huge social and economic progress that no one can roll back," he said.

The law would, among other things, rank non-EU immigrants according to level of education, age, language skills, job offers and financial security. The aim is to attract skilled workers to maintain the Germany economy's competitiveness.

One issue is a special exemption sought by the Social Democrats for refugees whose asylum applications have been rejected but who are already well integrated in German society.

A shortage of qualified workers is good incentive for change. Germany's coalition government has reached a deal on several key immigration issues, including making it easier for non-EU citizens to work in the country. (03.10.2018)

Refugees are being well integrated into Germany's jobs market, the country's employment agency has said. New figures show that in May 2018, more than 300,000 refugees were employed in Germany. (21.08.2018)

The new Balkan Dream is a $2,000 per month telecommute

Thousands in the West Balkans work via online freelance platforms, but their off-the-books jobs offer no health or unemployment coverage. The only other option for many would be a one-way ticket to seek a life abroad. (28.08.2018)