Foreign Minister Frank-Walter Steinmeier has appealed to the UK to remain in the European Union, regardless of progress on the EU treaty change sought by Britain's Conservative-led government. 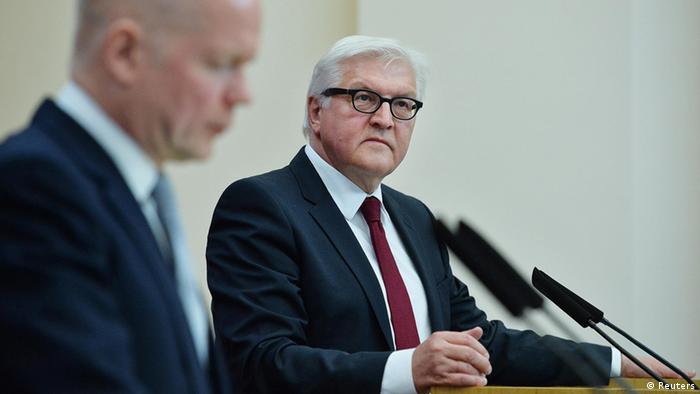 Frank-Walter Steinmeier made his first visit to London since returning to the foreign minister's post on Monday, asking his British counterpart William Hague not to lose sight of the benefits of EU membership.

"In this 21st century world, we want to protect our political, economic and cultural influences," Steinmeier said, adding that, on the 100th anniversary of the outbreak of World War I, such European ties "really must not be underestimated."

The German foreign minister said it would be "an exaggeration" to assert that Germany and the UK were on precisely the same page when it came to treaty reform for the EU.

British Prime Minister David Cameron said at last year's World Economic Forum in Davos that - if re-elected in 2015 - he would negotiate amendments to EU treaties and then put British membership to a referendum no later than 2017. French President Francois Hollande said last week that treaty change was "not a priority."

Hague said on Monday that he was "not in any way disheartened" by Hollande's stance, because it "does not rule out the kind of reform we are seeking."

Although more reticent than Britain's Conservative party, battling both backbench dissatisfaction with the EU and the rising influence of the explicitly euroskeptic UK Independence Party, Germany has responded less coolly than France to the prospect of EU treaty alterations.

The British Foreign Secretary also welcomed the German discussions on a more pro-active German foreign policy, a topic that featured heavily at the Munich Security Conference over the weekend. He said it was possible "to be active in many areas" internationally without necessarily taking military action.

Steinmeier, Chancellor Angela Merkel and President Joachim Gauck have all discussed the prospect of greater German involvement internationally in the past week. In London, Steinmeier said that greater diplomatic involvement could see off the need for military action, saying that Germany had previously let situations deteriorate until all that remained was "merely a yes/no question" on military intervention.

"I believe that we must take another close look at our foreign policy and diplomatic toolbox, to see whether we have ways of taking swifter and more effective action," Steinmeier said.

Steinmeier, back in his old post as foreign minister following four years in opposition, had met his Turkish counterpart Ahmet Davutoglu in Berlin earlier on Monday, calling on the EU to consider reopening the stalled accession process with the government in Ankara. Cameron's Conservatives are among the more vocal European advocates of Turkish admission into the bloc.