The confusing golden effigy of the Turkish president has been removed by the fire brigade in the western German city of Wiesbaden. It was put up without the knowledge of city officials and was not generally welcomed. 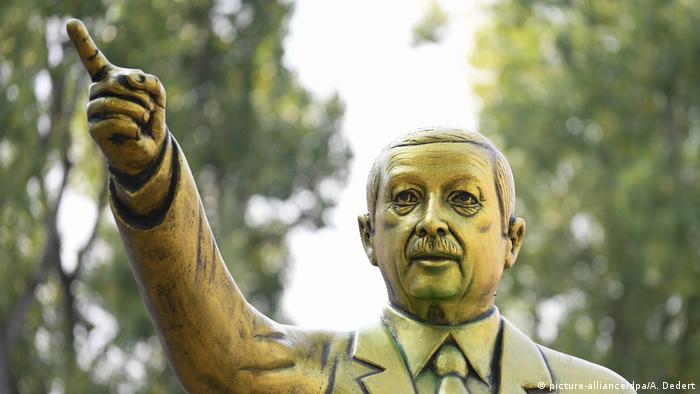 The 4-meter (13-foot) statue of Turkish President Recep Tayyip Erdogan had been erected in Wiesbaden on Monday much to the surprise and confusion of the residents of the southwestern German city.

The larger-than-life effigy installed in the city's Platz der Deutschen Einheit (German Unity Square) depicts Erdogan with a raised right arm, a pose reminiscent of the famous statue of the late former Iraqi dictator Saddam Hussein, which American forces tore down in 2003 during the Iraq invasion.

The statue was quickly covered in expletive-laden graffiti.

Local authorities said that as its security could no longer be guaranteed, the statue would be taken down. It was removed by the fire brigade late on Tuesday night and police put out a short video of the process:

It was an art installation, part of the Wiesbaden Biennale for Contemporary Art, but was erected without the knowledge of city officials, a Wiesbaden spokesperson told German news agency dpa on Tuesday. This year's art festival is taking place under the motto "bad news."

"We have received calls from a string of confused citizens — it is not clear to people that it is part of the Biennale," the spokesperson said of the statue.

The local newspaper Wiesbadener Kurier reported that city authorities had authorized the statue, but didn't know Erdogan would be the person depicted.

Public broadcaster ZDF reported that the police had to "protect," the statue from angry residents, as well as separate some Kurdish and Turkish Germans following a "fierce confrontation."

Some Turkish Germans from the city's western side proudly took selfies with the statue, while local Kurds and other criticized them for supporting an authoritarian leader.

Erdogan is scheduled to make a state visit to Berlin next month. Many Germans are opposed to his visit due to his authoritarian tendencies and attempts to sway political support among Germany's large Turkish minority. Cem Özdemir, the leader of Germany's Green Party, said in July that the Turkish president has transformed his country "into a kind of Turkmenistan or Azerbaijan with censorship, despotism, nepotism and autocracy."

Should Europe prop Up Erdogan?

Opponents to Turkish President Recep Tayyip Erdogan's planned referendum really do exist. They see it as a threat to democracy. Now more and more Turks living in German cities are campaigning against the referendum. (21.03.2017)

Germany's Social Democrats suggested the government in Berlin should use taxpayers' money to help Turkey. Reactions to that proposal have been negative here, and DW's Henrik Böhme says Turkey can only help itself. (22.08.2018)