Erdogan opponents mobilize in Germany | Germany | News and in-depth reporting from Berlin and beyond | DW | 21.03.2017

Opponents to Turkish President Recep Tayyip Erdogan's planned referendum really do exist. They see it as a threat to democracy. Now more and more Turks living in German cities are campaigning against the referendum. 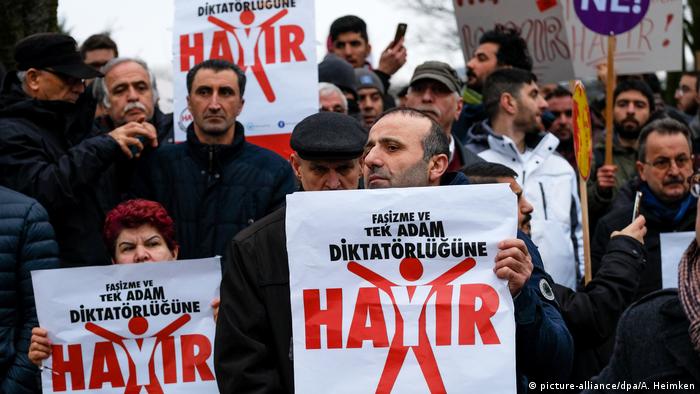 Turkish-German relations have arguably reached a historic low point. DW explains what's behind the conflict over the Turkish president's accusations of "Nazi practices" in Germany. (21.03.2017)

Turkish politicians have abandoned plans for more campaign events on German soil ahead of the April referendum, says the ruling AKP party. Previously, Angela Merkel threatened to ban such events over Nazi insults. (21.03.2017)

"Every Turkish woman that cherishes her freedom must vote 'no,'" says Nurcihan Bas. The young woman walks across Cologne's large Neumarkt square with two red signs, each emblazoned with the word "Hayir," which is Turkish for "no."

Only a few people have gathered to demonstrate alongside organizer Gunay Capan on this cool and rainy Saturday. "The Turkish people are supposed to cast a vote against democracy with a 'yes' to the referendum? That is absurd," says Capan. Neither he nor the other 'no' voters are members of the ruling Justice and Development Party (AKP), but are simply Turkish citizens who want to inform voters. "Many don't understand what the referendum is really about. They just think they are voting for or against Erdogan. But it is really about a regime change." Capan and his colleagues are using information booths, events and discussions in Turkish cafes to educate voters.

"Who wants to live in a dictatorship?" asks Dogan, a Cologne resident. The young man, in his mid-20s, is against President Recep Tayyip Erdogan's planned changes to the Turkish constitution. Dogan is at Neumarkt with a very big drum. He says that many of his friends are Erdogan supporters. He adds that the pending referendum is a taboo subject among them. "Erdogan supporters get extremely defensive as soon as I voice criticism about the vote," he says. "I can't understand the friends I grew up with here in Germany." 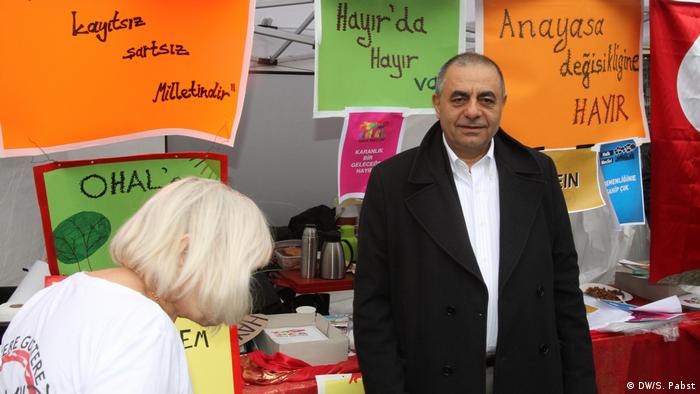 Capan: It's a choice between democracy and dictatorship

A rift in the Turkish community

The referendum on Erdogan's proposed presidential system has deeply divided Germany's Turkish community. Now there are a number of "no" initiatives organizing events in many German cities. Turgut Yüksel, a representative in the Hesse state parliament from Germany's Social Democratic Party (SPD), recently established a "no" initiative in Wiesbaden. "When we started our initiative, many people were happy to see that a group had decided to engage in the 'no' campaign," he told DW. Turgut Yüksel and his colleague Mervet Öztürk of the Green Party are convinced that Erdogan's constitutional changes will undermine the country's parliamentary system and do away with its separation of powers.

Get on the bus

Their aim: To show that there are Turks and people with Turkish roots that are against the referendum. Organizers hope that their initiatives will encourage people to openly express their opposition, says Yüksel. They are mobilizing in every sense of the word: For two weeks, starting March 27, they will even be offering car and bus services to help get people from distant areas to consulates so they can cast their ballots.

Organizing such initiatives is truly a challenge, for as Gokay Sofuoglu, chairman of the Turkish Community in Germany says, relations among Turks here are tense. Turks and Kurds, nationalists and dual citizens, Muslims and Alevis, conservatives and secularists - all are being egged on by the Turkish government. "That scares a lot of them," says Sofuoglu. He told DW that, "Turks living in Germany are afraid to clearly voice their opinions." Many associations and local groups have distanced themselves from one another, but Sofuoglu says that opposition to Erdogan's presidential system has brought them together. Sofuoglu: There is a silent majority

"No" voters in Germany have an advantage over those in Turkey: They can take to the streets to protest against Erdogan's plans without having to fear reprisals from the state. Nevertheless, they are still bullied - on the streets, on social networks or by media outlets with ties to Erdogan. Those outlets label opponents of the presidential system "terrorists" and "rebels." Sofuoglu says that such defamations make many people extremely cautious and reserved. He himself is convinced that, "The 'no' voters are a silent majority, I think we are playing an important role."

The referendum could very well be decided in Germany: Should the vote be close in Turkey, then the voices of each of the 1.4 million eligible voters living in Germany would become that much more important. During the last parliamentary elections 10 percent more Turks living in Germany voted for the ruling conservative Islamic AKP than did in Turkey itself. And the AKP exerts a lot of influence here through its German offshoot "Union of European Turkish Democrats (UETD)" as well as through the "Turkish-Islamic Union for Religious Affairs (DITIB). DITIB is an Ankara-sponsored umbrella organization that finances more that 900 mosque communities. Yet Sofuoglu says that even AKP supporters and Turkish nationalists have become skeptical about the president's plan.

"Erdogan is unsure, and he has no idea how big the 'no' camp is. That is why he is getting so much more aggressive," says young Nurcihan Bas as she smiles. "Erdogan is scared of us."