Turkish politicians have abandoned plans for more campaign events on German soil ahead of the April referendum, says the ruling AKP party. Previously, Angela Merkel threatened to ban such events over Nazi insults. 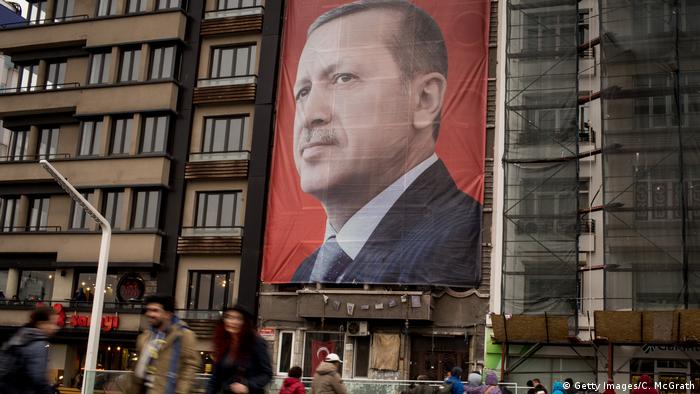 The head of Germany's largest Jewish organization has said the Turkish president's last comparisons with National Socialism insult the memory of Holocaust victims. It's the latest salvo in an incendiary war of words. (21.03.2017)

The controversial visit to Cologne by Turkish Prime Minister Recep Tayyip Erdogan was organized by the Union of European Turkish Democrats . The UETD is only one of Erdogan's lobby groups. (21.05.2014)

The decision to halt referendum events was made in Ankara, a Cologne-based representative of Recep Tayyip Erdogan's AKP party said on Tuesday.

"All future events that were planned have been cancelled," she told the AFP news agency.

The move was a "gesture of goodwill" towards Germany, said rally organizers from the Union of European Turkish Democrats (UETD) who confirmed the cancelation to German news agency DPA.

Turkish AKP politicians are eager to gain votes of Turkish citizens living in Germany ahead of the April 16 referendum. Roughly 1.4 million of them are eligible to vote. The controversial plebiscite would approve a constitutional reform to give the Turkish president more power.

However, their attempts to hold campaign events in Europe sparked a thunderous diplomatic row that saw Erdogan compare German and Dutch officials with Nazis.

On Monday, German Chancellor Angela Merkel had warned that Germany could ban all AKP campaign events if Ankara continued with Nazi jabs.

Despite the AKP's announcement on Tuesday, it remains unclear whether President Erdogan - who continued with the harsh rhetoric on Tuesday, urging his supporters to vote "yes" on the constitutional reform as a response to a "fascist" Europe - would also stay home.

According to German media reports, Erdogan was planning to visit Germany. When asked about the reports, however, UETD General-Secretary Bulent Bilgi said that his organization "cannot determine" the president's actions.

Several German politicians have said that the Turkish leader and his allies should be barred from visiting.

"Enough is enough," Merkel ally and vice-president of her conservative CDU party, Volker Bouffier, told DLF radio. "Mr. Erdogan and his government are not welcome in our country, and that must be now be understood."

His comments were echoed by Reiner Haseloff, the premier of Saxony-Anhalt state.

"Those who compare us to Nazis are not welcome. That is not acceptable," he told Die Welt newspaper in an article published on Tuesday.

German Finance Minister Wolfgang Schäuble also slammed the AKP's behavior in the campaign, saying it was so "unimaginable" it defied comment.