The lobby behind Turkey′s prime minister | Europe| News and current affairs from around the continent | DW | 21.05.2014

The controversial visit to Cologne by Turkish Prime Minister Recep Tayyip Erdogan was organized by the Union of European Turkish Democrats . The UETD is only one of Erdogan's lobby groups. When the Turkish prime minister holds his rally in Cologne's Lanxess Arena on Saturday (24.05.2014), an estimated 20,000 people will be on hand to hear him, despite all the criticism ahead of the visit. Erdogan's appearance will be broadcast live on Turkish television.

The last time the prime minister held a similar event amid a sea of Turkish flags – also in Cologne in 2008 – it was thanks to the Union of European Turkish Democrats (UETD). The organization was founded in Germany in 2004 as a non-partisan interest group for the Turkish government and ethnic Turks living in Europe.

The UETD is a lobby group for the Turkish government and for the governing AKP party, not only in Germany, but also in France, Belgium, Austria and the Netherlands, where it works to lobby for the political aims of the Erdogan government and, in turn, to convince Turks living in Europe to support these aims.

The balance of power 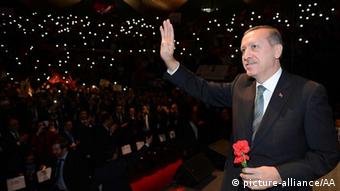 Chasing votes in Germany? Erdogan at a UETD rally in Berlin

The UETD has repeatedly emphasized that Erdogan's visit is not a campaign rally, but rather a festive act to mark the 10th anniversary of the organization.

This is hard to believe considering that Turkey's presidential election is just around the corner. For the first time ever, Turkish citizens living outside of Turkey will be allowed to vote in the August 10 ballot, including in Germany where most of the five million Turks abroad live.

In the end, these potential voters could sway the outcome of the poll and the balance of power. All that Erdogan would need to win is roughly five percent more of the vote than his AKP party received in the March local elections. So, campaigning in Germany is obviously worth it.

The UETD, whose headquarters are in Cologne, is well aware of this. The group has expanded its operations massively in Germany and opened new branches in Berlin, Munich and Stuttgart. With this support network, Erdogan's AKP is better organized in Germany than any other Turkish party.

Ahmet Senyurt, a German journalist and author with Turkish roots, knows how the UETD has steadily increased its membership. The group places a lot of emphasis on Turkish values and customs, which is very popular with many German Turks, he says.

And the Turkish government, he says, spares no expense. According to media reports, it donated 10 million euros to the group in 2012 and 2013 alone.

Retaining the cultural values of the Ottoman Empire

Another organization similar to the UETD was also founded three years ago: the Agency for Turks Abroad (YTB). The YTB was a reaction to the murders carried out by the neo-Nazi NSU in Germany and other crimes against Turks in Germany. 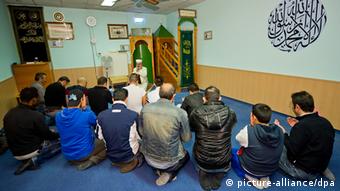 A DITIB mosque in Bavaria. DITIB is close to the Turkish government

The aim of the YTB is to unite all Turks living in Europe as well as all others who feel drawn to the values of the Ottoman Empire, such as Uigurs and other Turkish peoples of central Asia. According to Senyurt, the Turkish government is hoping to tap into future political spheres of influence.

Gokay Sofuoglu, chairman of the Turkish Community of Germany, points out that most of these attempts at influence-peddling by lobby groups occur at mosques belonging to the Turkish Islamic Union (DITIB), which is close to the government in Ankara.

"Some government minister or parliamentarian comes and gives a lecture," he says. Joint events sponsored by the UETD and YTB apparently aim to expand this influence, Sofuoglu notes, adding that the increase in membership has a lot to do with the amenities offered by the well-heeled UETD.

"Just recently there was a week-long conference in Turkey at a five-star hotel and the members paid nothing," he says. Smaller groups, like Sofuoglu's Turkish Community of Germany, cannot afford such lavish excursions.

Following the explosion at the Soma mine, Turks have unleashed their frustration on social networking sites. Their main target is the head of their government - Prime Minister Recep Tayyip Erdogan. (15.05.2014)