A scaled-back ceremony has been held to mark a quarter of a century since the killing of 8,000 Muslim men and boys during the Bosnian War. A burial service was held for the recently recovered remains of nine victims. 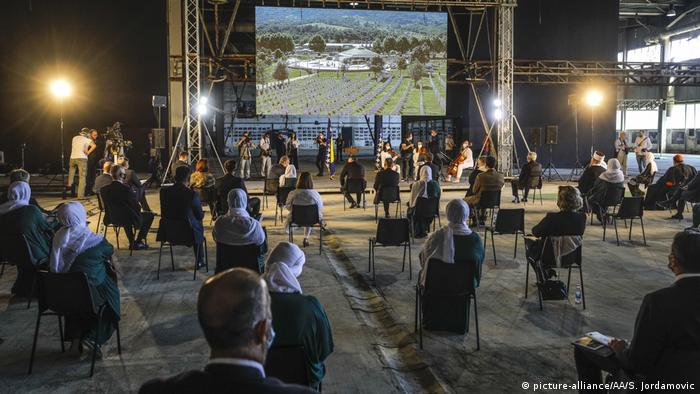 A ceremony marking the 25th anniversary of the Srebrenica massacre took place on Saturday in Potocari in Bosnia and Herzegovina, near the site of what is considered the worst atrocity on European soil since World War II.

Organizers had planned to hold a grand service to honor the memories of around 8,000 men and boys killed in the targeted massacre. But a large event had to be canceled due to limitations posed by the coronavirus. 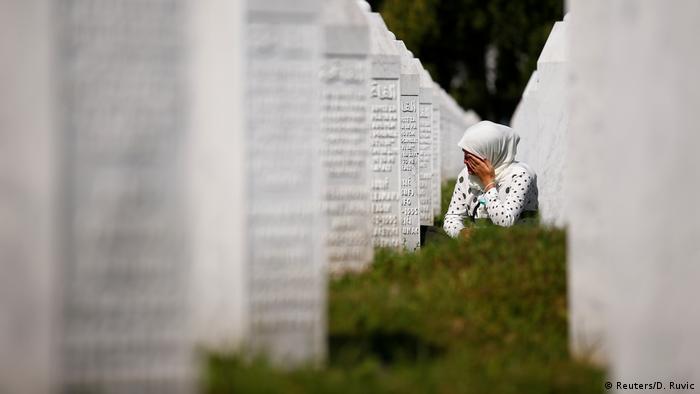 Normally, tens of thousands of people attend the annual ceremony, but this year, some 50 people — most local leaders and victims' relatives — took part, with seats placed at least a meter apart to maintain social distancing rules.

Video messages from more than 35 current and ex-world leaders, including German President Frank-Walter Steinmeier and former US President Bill Clinton, were played.

The Srebrenica massacre took place towards the end of the 1992-95 Bosnian War, which saw Serbs fighting against Bosniaks and Croats.

On July 11, 1995, Bosnian Serb militias invaded the town of Srebrenica in eastern Bosnia and within a few days killed some 8,000 Muslim men and boys.

Until now, the remains of almost 6,900 victims have been found and identified in more than 80 mass graves. Every year, more bodies are uncovered and reburied.

Following the morning ceremony on Saturday, the remains of nine victims recovered over the last year were laid to rest in a funeral at the memorial cemetery in Potocari, a village just outside Srebrenica that served as the base for the UN protection force during the conflict.

Attendees prayed for the buried and that the remains of those still missing would one day be recovered, Bosnian newspaper Dnevni avaz reported. 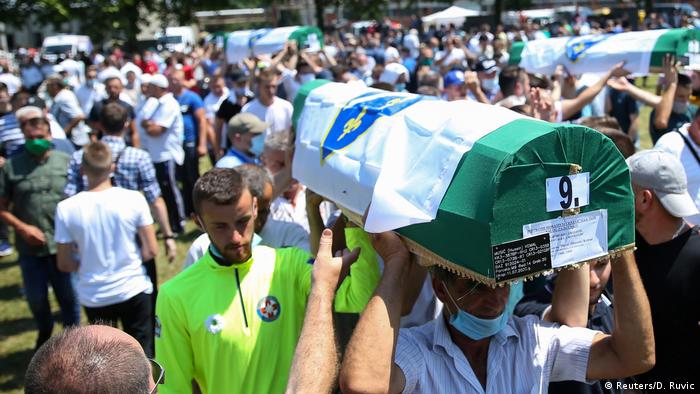 For the mass killing, former Bosnian Serb leader Radovan Karadzic and Bosnian Serb military chief Ratko Mladic were found guilty of genocide by the UN War Crimes Tribunal for the former Yugoslavia and sentenced to life in prison.

Mladic currently awaits an appeals trial against his life sentence.

Due to the coronavirus pandemic, the war crimes tribunal has postponed the start of the appeal and delayed the verdict until next year.

Killings 'under the eyes of the global public'

Ahead of the ceremony, European leaders called for remembrance of the horrifying event.

"We must confront the past with honesty and look to the future with determination to support the next generations," said a statement from EU Commission President Ursula von der Leyen, EU Council President Charles Michel and the EU's top diplomat, Josep Borrell

German Foreign Minister Heiko Maas said such a massacre must never be allowed to happen again.

"We agree. Srebrenica must never repeat itself," Maas said in a statement.

Like no other place, the German diplomat said, Srebrenica stands for the atrocities and crimes against humanity committed in the countries of the former Yugoslavia in the 1990s.

The killings took place "at the end of the 20th century, in the middle of Europe, almost under the eyes of the global public," Maas said. "We must oppose nationalist tendencies wherever we encounter them," Maas stressed.

"Today we are with the victims of the genocide of Srebrenica and their relatives - in our thoughts and with our hearts," Maas said. "The commemoration must be an incentive to consistently follow the path of reconciliation and reappraisal," he added.

German President Frank-Walter Steinmeier said more had to be done to reckon with the past.

"Remembering the suffering and pain is a central building block for reconciliation. In the same way, coming to terms with the events under criminal law is also part of this process," Steinmeier said in his video message for the ceremony. But this is not enough, he said.

"New bridges must be built where old ones have been destroyed. To build trust where hateful war rhetoric has stirred up hatred. To seek dialogue where not a word has been said for a long time," he said.

A quarter-century after the Srebrenica genocide, the former UN prosecutor for war crimes Serge Brammertz speaks about the ongoing process of reconciliation and the recent increase in historical revisionism. (10.07.2020)