Remembering the 1995 Srebrenica massacre of Bosniaks | Europe | News and current affairs from around the continent | DW | 11.07.2020

Remembering the 1995 Srebrenica massacre of Bosniaks

In 1995, Bosnian Serb forces killed more than 8,000 mostly Muslim men and boys in Srebrenica. Men who were directly or indirectly involved in the massacre hold key positions in Serbia's political and economic spheres. 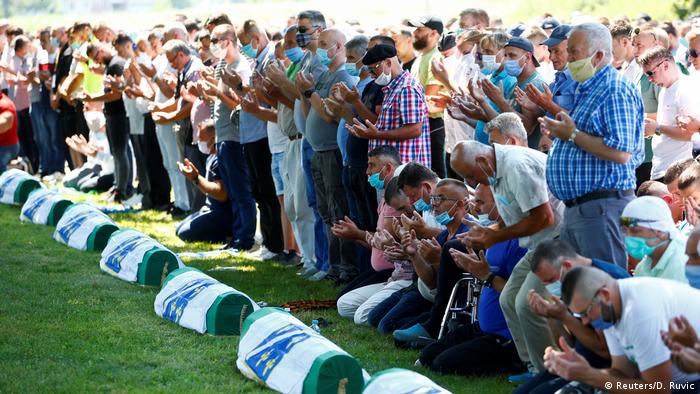 In July 1995, forces from Bosnia's breakaway Republika Srpska and paramilitary allies killed more than 8,000 mostly Muslim men and boys in the town of Srebrenica. International tribunals later classified the killings as a genocide.

Young people in Bosnia and Herzegovina are working to keep the massacre in the global consciousness. "You must never forget what happened," the journalist Lamia Bravo told DW. "If you do, they can happen again: There must never be a second Srebrenica."

The International Criminal Tribunal for the former Yugoslavia (ICTY) spent years investigating the massacre. The ICTY found that Bosnian Serb forces began planning the genocide during the final stage of the three-year Bosnian War, in March 1995. 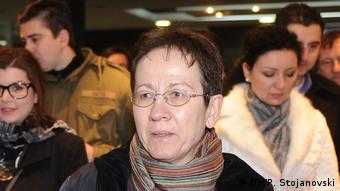 "Europe failed," Gudrun Steinacker, the former German ambassador to the nations of Montenegro and Macedonia (now officially called North Macedonia), told DW. "After four years of war and ethnic cleansing, with concentration camps, forced displacements and mass rapes, we should have known this could happen," she said.

The objective of the Bosnian Serb forces was to capture Srebrenica, which had been declared part of a UN safe zone in 1993. About 400 poorly armed Dutch UN peacekeepers were stationed there and tasked with protecting refugees arriving in the town.

When the attackers overran Srebrenica on July 11 and took peacekeepers hostage, about 25,000 Bosniaks fled to the UN base at Potocari on the city's outskirts. They sought refuge despite the scorching heat and catastrophic hygienic conditions. A day later, the attackers began to assault, rape and kill them. On July 12 and 13, girls, women and elderly refugees were loaded onto buses and driven to regions under Bosniak control.

After killing more than 8,000 people from July 13 through 17, the attackers disposed of their bodies in mass graves. Forensics specialists from abroad have since helped establish the identities of about 7,000 murdered Bosniaks so far. They have been given proper burials in Potocari's cemetery.

The forensics work was very challenging and psychologically taxing. After the massacre, Bosnian Serb soldiers reopened the mass graves with heavy machinery and moved human remains to secondary and tertiary graves. Their aim was to conceal their crimes. Pathologists have had to retrieve and piece together human remains from various sites.

Read more: The end of justice delegated to The Hague

The two key figures responsible for the Srebrenica massacre, Republika Srpska leader Radovan Karadzic and military commander Ratko Mladic, were finally caught in 2008 and 2011, respectively. They and several accomplices have been sentenced to life imprisonment by the ICTY. Many other perpetrators, however, remain free to this day and live in Serbia, without ever having faced consequences.

"Midlevel military figures were never forced to take responsibility," Murat Tahirovic, the head of the Association of Victims and Witnesses of Genocide, told DW. Though his organization has provided comprehensive documentation on the involvement of 24 units and their 227 members, he said, authorities have never prosecuted them.

The Srebrenica massacre did not further the military objectives of Republika Srpska. For years, however, Mladic stoked anti-Muslim sentiments among his soldiers. He spoke of the Ottoman Empire, which had bested the Serbs at the 1389 Battle of Kosovo. The defeat lead to Kosovo falling under Ottoman Muslim rule for the next 500 years.

"Serbian soldiers from Kosovo are battling Turks to this day," Karadzic wrote in 1996. "It is an epic fight for survival, for life, with the same enemy: Turks, who since 1389 are making it impossible for Serbian villagers to live in peace." 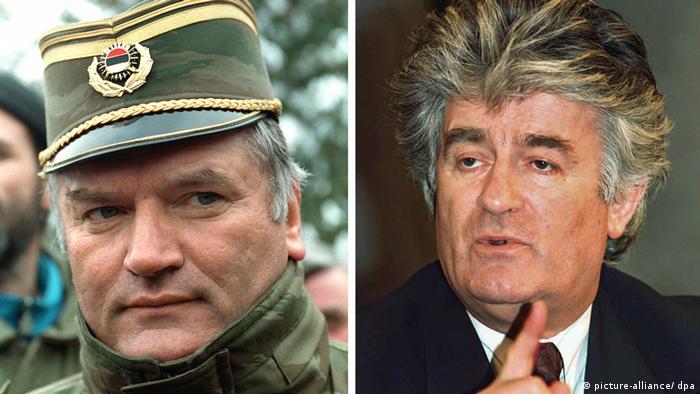 The Serbian Orthodox Church supported Mladic. Serbs celebrated the notorious  paramilitary commander Zeljko Raznatovic, better known as "Arkan," as a hero. Now, a quarter of a century after the slaughter of Srebrenica, most Serbian leaders and many citizens still refuse to recognize it as a genocide; streets, schools and student dorms in Serbia are named after the convicted war criminals Mladic and Karadzic; and many of the men who were directly or indirectly involved in the 1995 massacre hold key positions in the country's political and economic sphere.

"Many only commemorate the Srebrenica massacre on anniversaries," Sarajevo-based historian Husnija Kamberovic told DW. He believes the reason for this may be that world leaders wish to move on from the massacre. He said the key to peace would lie in "developing a nonnationalist society."