The head of Germany's center-left SPD defended the party's stricter stance on asylum policy. Andrea Nahles said it was "a big mistake" for the Green party to oppose designating more countries as "safe" for deportations. 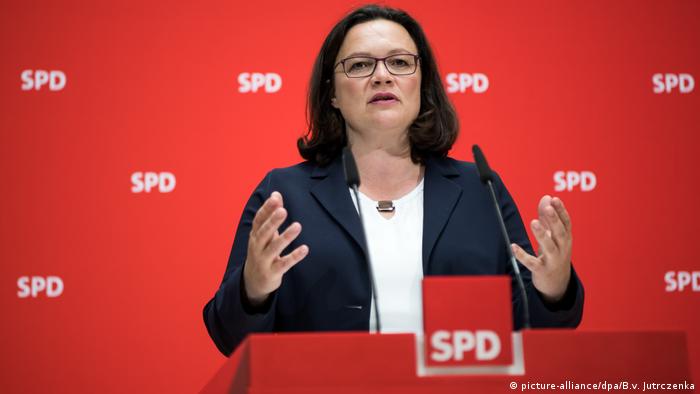 As part of a strategy to revamp Germany's struggling Social Democrats (SPD), party leader Andrea Nahles sought to draw a clear line between the SPD and the environmentalist Greens in an interview published on Saturday.

"Imitating the Greens does not help us," Nahles told the German newspaper Münchner Merkur, adding that this is particularly the case when it comes to asylum policy.

"The Greens take a simple position. Our course is nuanced, but also realistic," she said.

Nahles added that it's a "big mistake" for the Greens to oppose designating more countries as safe countries of origin, which makes it easier to deport asylum-seekers whose applications have been rejected.

"Look at Georgia, where a new form of gang crime is developing. You can't close your eyes and ears and pretend it's about civil war refugees," she told the paper.

The SPD has largely been out of the headlines in Germany in the past few weeks after a crisis over migration policy and internal party power struggles threatened to tear apart the government's conservative bloc.

Despite this, the party has battled falling numbers in opinion polls, while the Greens have seen a steady rise.

According to the latest "Deutschlandtrend" survey released on Friday, support for the SPD was at 18 percent — down from the 20.5 percent they received in last September's general election, which was their worst-ever result.

The Greens, on the other hand, are polling at 15 percent — much higher than the 8.9 percent they received in the election.

The latest poll also put support for the far-right Alternative for Germany (AfD) at 16 percent, making it the third strongest party behind the SPD and Chancellor Angela Merkel's conservative bloc.

The SPD, which is Germany's oldest party, has been criticized by voters and party members for not sticking up for its base and pushing for workers' rights and social policy.

Although recent poll numbers haven't been promising, Nahles has received more support as a leader within her fractured party, including from the SPD's youth wing.

"Andrea Nahles shows mind-boggling dedication," youth wing leader Kevin Kühnert told the newspapers of the Neue Berliner Redaktionsgesellschaft. "She takes a great deal of time for personal consultations and calls again early in the morning or late at night." 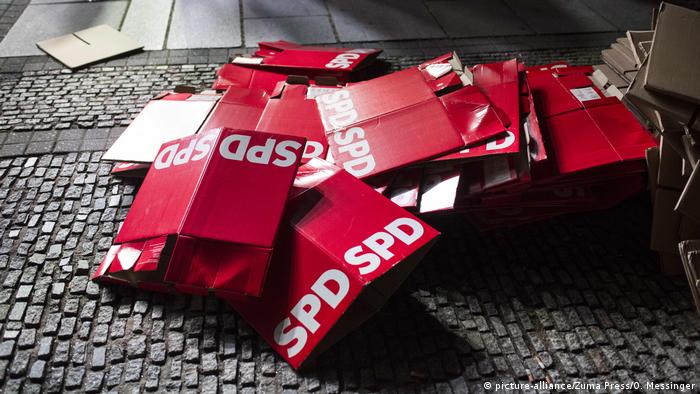 Nahles hopes to turn around the SPD's dipping poll numbers

Although Nahles emphasized that not all migrants who come to Germany can stay, she criticized Interior Minister Horst Seehofer's CSU for using migration issues to try to raise its profile in the polls.

"I refuse to raise my own profile by behaving badly towards the weakest in society. This is the difference to right-wing populists, but also to the CSU. Their behavior is often shabby."

As the October 14 state election in Bavaria draws closer, the SPD hopes to garner more support for the center-left party in the traditionally conservative, CSU-dominated state.

Currently, the CSU dominates the polls, followed by the Greens, SPD and AfD.