Ecuador and Chile have been the scenes of anti-government protests in recent weeks, many of which have ended in violence. Is a wave of social protest about to break over all of Latin America? 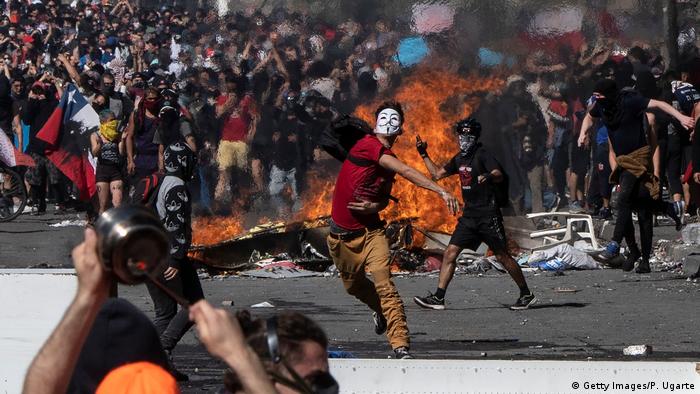 Over the past two weeks, Ecuador and Chile — two Latin American countries separated by more than 2,500 kilometers (1,500 miles) — have seen intense anti-government protests. The demonstrations began after the presidents in each country made economic announcements, which in turn sparked a massive public outcry.

The social trends behind the protests can be seen in other South American countries, said Valeska Hesse, director of the Latin America office of the Friedrich Ebert Foundation (FES), a political think tank with ties to Germany's Social Democratic Party.

Hesse pointed out that much like Argentine President Mauricio Macri, Ecuador's leader, Lenin Moreno, was forced to announce austerity measures — now canceled — because of debt negotiations with the International Monetary Fund.

"For more than 50 years, the IMF has always trumpeted the same recipe, namely economic liberalization and cuts to public spending," she said. And although Chile doesn't have debt problems, she said there are nevertheless parallels to the situation in Ecuador and Argentina.

"Chile is the most neoliberal country in the world. Every aspect of public life there has been privatized: pensions, health care, education," said Hesse. Yet many Chileans have trouble making ends meet, and that has been an important factor in protests there. "The average middle-class citizen there earns about €700 ($778) a month, but cost of living prices are comparable to Berlin."

But Chile is posting good economic figures, a fact that was recently confirmed in a report issued by the Economic Commission for Latin America and the Caribbean. It pointed out that poverty levels in Chile had gone down by three percentage points between 2016 and 2019. The same report, however, found that 1% of the country's population owns 26.5% of its wealth.

Hesse said such extreme inequality between rich and poor can be seen in many countries across the continent. And while Chile isn't the poorest region in the world, "its inequality is the world's most extreme." That statement was backed by the World Bank's GINI index, which tracks global wealth inequality. Only two countries outside of Latin America — South Africa and Rwanda — were ranked among the world's 10 most economically unequal. Chile was ranked seventh.

Michael Alvarez is a spokesman for the Green party-affiliated Heinrich Böll Foundation, and served as the think tank's director in Santiago de Chile for several years. He told DW that after much social progress in the early 2000s, many Latin American countries are now tightening their belts. "Deficits are growing in Ecuador, Argentina and other countries across the region, and governments are not countering that with a systematic overhaul of their tax systems [and] tax reforms."

"When left-leaning governments were in power, [there were] many redistribution programs designed to improve the station of poor citizens," said FES expert Valeska Hesse. But, she added, they failed to solve urgent underlying structural problems.

Is there a risk the protests will spread to other countries in the region? Hesse doesn't think so. "If there was a risk of contagion, I would think people in Argentina would have gone out onto the streets, too. But maybe they just aren't because elections are being held on Sunday anyhow," she said.

Bettina Horst, deputy director of Chile's conservative think tank Libertad y Desarrollo, is more skeptical. "Every country in Latin America has its economic differences. The only thing they all have in common is the fact that organized left-wing groups are trying to destabilize their democracies," she said. "If they can't attain power [at the ballot box], they seek to gain it through violence."

In Horst's opinion, that's exactly what is happening in Chile. "[It's] protests with no clear aims and no leadership, simply set on destabilizing the country's democracy."

Alvarez disagrees. He condemned the violence seen in Chile, but pointed out that many peaceful protests are being staged by citizens demanding their rights. And, he said, it's not just happening in Chile.

"Compared with the last century, people in Latin America are no longer willing to accept social inequality," he said, convinced that this sentiment can be directly traced to the strengthening of civil society that has taken place over the past 20 years.

Chile has been rocked by violent protests against President Sebastian Pinera. The unrest shows the country's ruling elite are woefully out of touch with ordinary people, says DW's Emilia Rojas-Sasse. (22.10.2019)

The president of Chile has announced a series of social reforms after a metro fare hike sparked days of deadly protests. Whether the reforms will stop the general strike planned for Wednesday remains to be seen. (23.10.2019)