The government has sent military troops to the streets to enforce a curfew as it fights for control of the capital. At least five people have died since the violent protests began 10 days ago.

The president of Ecuador, Lenin Moreno, declared a 24-hour curfew and "militarization" in the country's capital, Quito, on Saturday to help security forces quell ongoing protests sparked by austerity measures.

The order went into effect at 3 p.m. (20:00 UTC) and would "facilitate the work of public forces against intolerable outbreaks of violence," Moreno said on Twitter.

"We're going to restore order in all of Ecuador," Moreno said. "We're starting with the curfew in Quito."

Meanwhile, the Ecuadorian interior minister, Maria Paula Romo, asked citizens to "go to their homes," before adding: "This measure will be valid until further notice."

The new security measures came as access roads to Quito's airport were blockaded and TV channel Teleamazonas showed images of its own facilities in flames, as well as stones being thrown at office windows, though there were no reports of any employees being hurt.

By the evening on Saturday, the military had retaken control of streets leading to the National Assembly and the national comptroller's office. Protesters earlier had broken into the building and lit fires there.

Over a week of violent clashes

The announcement of the curfew came within 30 minutes of its implementation, meaning protesters, many of whom had traveled to the city from other provinces, did not return home.

As a result, violence continued in Quito even after indigenous leaders, who had instigated the protests over fuel price increases, changed tack and confirmed they had accepted a proposal for talks with President Moreno in order to find a solution.

The UN has said via Twitter that the first round of talks will take place on Sunday afternoon. 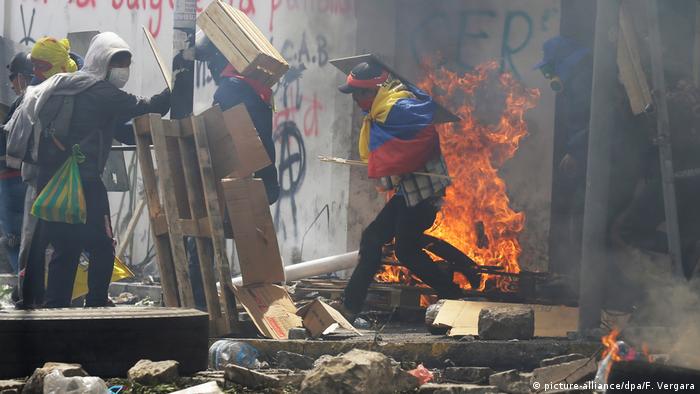 Protests in Quito have intensified over the course of the week

Moreno later announced some potential amendments to the controversial economic package that had sparked the protests, but he did not go back on the decision to remove fuel subsidies, which particularly drew people to the streets. Moreno said only that he would assess the effects of the cut in subsidies.

Ecuador's indigenous people's federation, CONAIE, welcomed a government initiative to break the impasse but reiterated that it wanted Moreno to first restore the fuel subsidies he had previously taken away as part of an austerity plan.

In a statement, CONAIE leader Jaime Vargas said Moreno's call for discussions was a "positive" step, but the federation stopped short of calling off the protests altogether.

"There's no real dialogue without guarantees for the safety of indigenous leaders," CONAIE said.

"We'll carry out approaches to try to repeal the decree," the statement added, "but we will hold protest actions nationally ... exhorting the government to provide necessary guarantees."

More than a week of protests in the Ecuadorian capital have already resulted in at least five deaths and nearly 2,000 wounded or detained.

More than 470 arrested in Ecuador over fuel prices

Violent protests erupted across Ecuador after the government announced the elimination of 40-year-old fuel subsidies. Hundreds of protesters have been arrested in five days as police struggle to quell the unrest. (08.10.2019)

With protests escalating in Ecuador, President Lenin Moreno has moved his administration out of the capital Quito to the port city of Guayaquil. Moreno claims his predecessor, Rafael Correa, is attempting a coup. (08.10.2019)

Mass protests give way to clashes in Ecuador