Protesters in Ecuador have clashed with police for the second day in a row over a drastic fuel price increase. President Lenin Moreno has left the capital and declared a state of emergency. 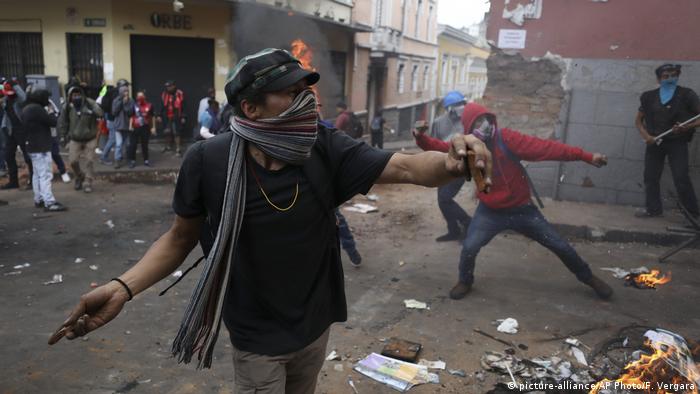 Thousands of anti-government protesters held rallies in Ecuador on Wednesday, defying a warning by the military on holding "violent" demonstrations as unrest over a fuel price hike continues.

The protesters are members of labor unions and indigenous groups demanding that Ecuadorian President Lenin Moreno either step down or reinstate fuel subsidies that were rescinded on October 3, following a $4.2 billion (€ 3.8 million) loan agreement with the International Monetary Fund. The move reportedly increased fuel prices by 120%.

Demonstrators in the capital, Quito, tried to get close to the government headquarters in the colonial-era Carondelet palace, which had been cordoned off by police.

Some of the protesters reportedly threw stones at police, who responded by firing tear gas. Other groups of demonstrators reportedly blocked streets in the city.

On Tuesday, after thousands of protesters stormed the parliament building in the capital, Moreno moved government operations to the port city of Guayaquil.

Security was tight Wednesday around the empty congress building in Quito. The government said it had declared an overnight curfew in "strategic" areas to protect government buildings. 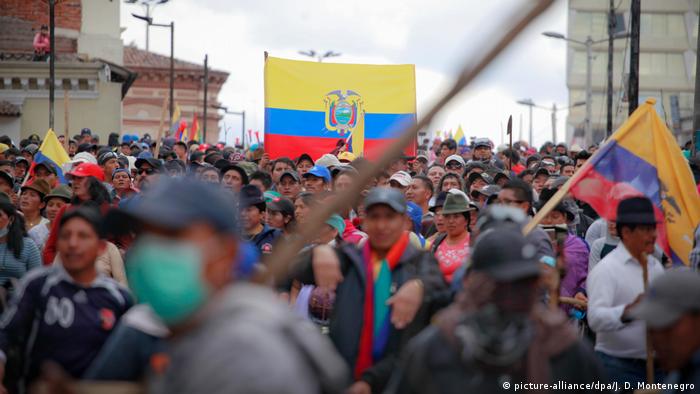 Hundreds of anti-austerity protesters gathered in Quito on Wednesday

Indigenous groups are seen as a powerful political force in Ecuador, and a major indigenous interest group CONAIE has mobilized around 6,000 of its members to Quito from other parts of the country.

The group said Moreno's government was behaving like a "military dictatorship" by declaring a state of emergency and setting an overnight curfew.

More than 500 demonstrators have been arrested since demonstrations began last week.

Mass protests give way to clashes in Ecuador

In Ecuador, protests led by indigenous people in the capital Quito are growing increasingly violent. Police used tear gas and water cannon to disperse demonstrators, who are protesting against the government and rising fuel prices.

Thousands of indigenous Ecuadorans have staged massive protests against surging prices for fuels and food. Is this a harbinger for more outbreaks of public rage against inflation in Latin America?