While a metro fare hike sparked the violent demonstrations in Chile, experts say discontent is much deeper and far-reaching. With an APEC summit one month away, Sebastian Pinera's government faces a tricky situation. 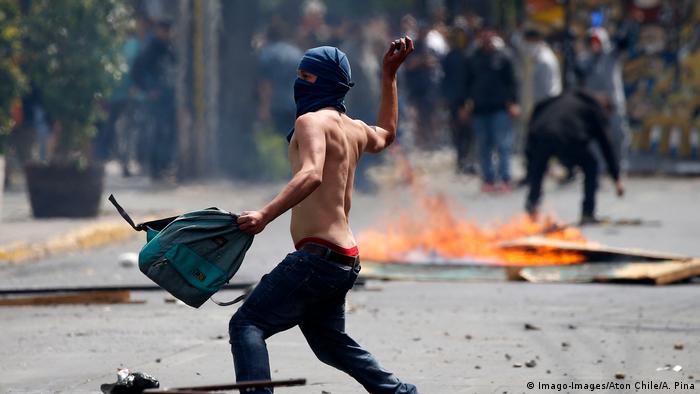 Less than one month out from the international Asian Pacific Economic Cooperation (APEC) summit in Santiago, the political and social situation in Chile is anything but calm. Protests against a metro fare hike began last Monday, and events since then have accelerated at an alarming speed. General discontent turned into banging pots and pans, the destruction of metropolitan train stations and the burning of buses, supermarkets and other buildings in the capital, Santiago. The protests also quickly spread to other areas of the country. Seven people had died as of Sunday. 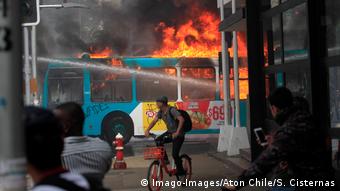 The protests in Chile have included torching buses and stores

The government of President Sebastian Pinera reacted by describing the discontent as the work of criminals and called a state of emergency, including a curfew — measures which have not been seen since the return of democracy in 1990, except in cases of natural catastrophes.

These only worsened the situation, and outrage has not diminished. In and around Santiago, public transport remains largely shut down, flights have been canceled, supermarkets will not open until further notice and classes have been suspended.

"Instead of having empathy, the government has responded with a 'hard hand' that denies people's suffering and their demands for justice," Jorge Saavedra, a lecturer in Cambridge University's sociology department, told DW. The expert on Chile said this problem has been going on for some time and is in part responsible for citizens' discontent.  "Ministry declarations that belittle people and their suffering, for example by telling them that long wait times in the public health system are a chance to socialize, show the disdain of a government that does not have the communication competencies to empathize with those who are having a hard time."

Pinera said one week ago that Chile was "an oasis" in Latin America. So how should one understand this explosion of dissatisfaction in a country that has healthy macroeconomic indicators and is usually seen as peaceful?

"It is not smart to arrogantly point fingers, especially when there are deep social fractures that haven't been processed correctly," Cristobal Bellolio, lawyer and assistant professor of political philosophy at Santiago's Adolfo Ibanez University, told DW.  These fractures have to do with a quality of life that is usually above the means of the people. "Chileans are paying for services that cost more than they can afford," he explained.

"If you scratch beyond the surface of Chile, there is evidence of enormous social, cultural, economic and political injustice. Its good image stands on weak pillars that are supported, in large part, by the patience of a people who are getting tired of being abused," Saaverdra said. The rise in metro fares was the drop of water that made the cup overflow in a country where basic services are privatized, social security is precarious and the privileges of certain sectors have angered a large segment of the population that feels shunted aside. 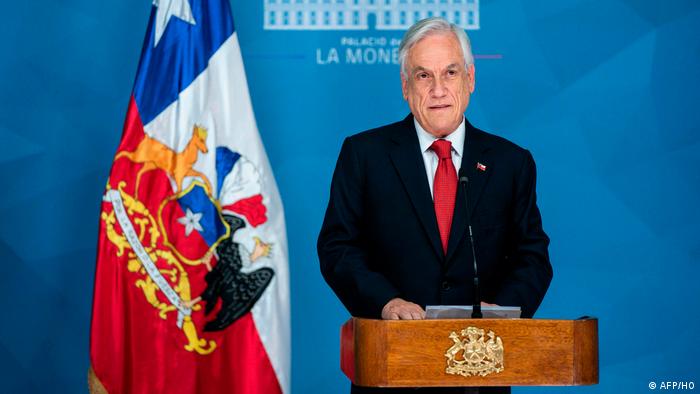 "What began as a statement against fare hikes reached its greatest expression when it was presented as a general fatigue over systematic increases to the cost of living," Bellolio said. He thinks the demands of the citizens could be affected by the vandalism. "Social movements get their demands addressed by authorities insofar as they have the public's sympathy. And if you burn metro stations, if you burn grocery stores that are sources of employment for those who live nearby, people will get fed up with the protests."

Authorities do not yet know exactly who is behind the destructive acts. Groups of anarchists and marginalized sectors of society are suspected, although there are some violence-prone individuals or criminals that take advantage of these occasions to commit all sorts of provocations, destroying infrastructure that is essential for a city's normal functioning.

All across the media, many people are asking why it took the government so long to react to the situation and why President Pinera has been so absent during the full-blown crisis, with just a short public appearance on Saturday.

"I think the government rapidly handed control to the military because it never had control of the situation. What is happening has not been seen for five decades in Chile," said Saavedra. He sees a difficult road ahead for the government, which has only been in power for 19 months.

"The government has acted in a really clumsy manner; it limited the problem to a question of public order and missed a golden opportunity. And by the time Pinera announced he was freezing the metro rate hike, it was really late," Bellolio said, describing the government's actions as incompetent and negligent. "It has been absent, and handing over power to the military is a sign of all this," he adds.

Can Chile hold the APEC summit amidst all this? Bellolio has his doubts. "We don't know if this violence is a cathartic expression that will end here or whether there are cells preparing more protests. If the government reacts no, it could have a chance to save the summit."