Pinera takes over from socialist Michelle Bachelet who capped a second term in office. He has vowed to fight economic "stagnation" from years of center-left rule. 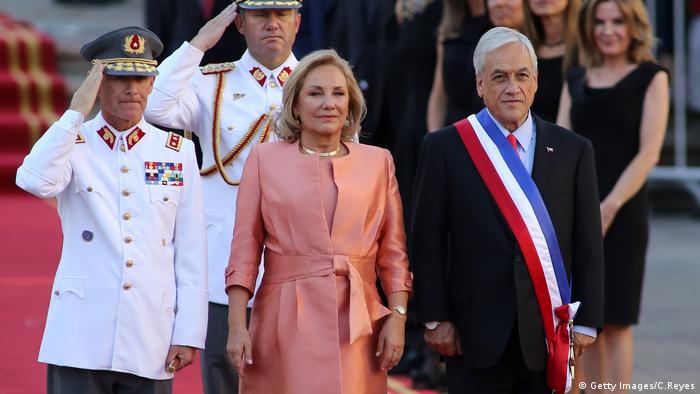 Conservative billionaire Sebastian Pinera was sworn in as Chile's president on Sunday for the second time in eight years.

Pinera, who was president from 2010-2014, vowed to revive an economy that has slumped under years of center-left rule and called for austerity and support for the shrinking middle class in the Latin American country.

He said his government would perform "major surgery" on the public health care system.

"The state must be austere and efficient in the use of public resources... and must never be captured by bureaucracy, corruption or political operators," Pinera said.

Read more: Farewell to the last female president in the Americas

"To make progress on all these goals, it is fundamental we counter the stagnation of recent years, restoring fiscal equilibrium as well as our leadership, dynamism and ability to grow," Pinera said in a speech from a balcony at the presidential palace in the capital Santiago.

Leaders from neighboring Latin American countries, including Argentina, Bolivia, Mexico and Peru attended the inauguration ceremony in the coastal city of Valparaiso. Also present was the former King of Spain Juan Carlos.

The 68-year-old Harvard-trained economist, who made his fortune introducing credit cards to Chile in the 1980s, was elected in December with a strong mandate.

Pinera is entering office at a time when Chile's economy is showing signs of rebounding. Rising copper prices have boosted the country's exports, helping shore up government revenues.

"The good times are coming," his supporters chanted after he was sworn in.

But Pinera faces a challenge of herding his own sometimes fractious coalition, which includes parties that backed the dictatorship of Gen. Augusto Pinochet from 1973 to 1990.

He will also face stiff opposition from the leftist coalition that has vowed to fight his plans to lower taxes and amend Bachelet's progressive policies.

Protesting Bolivians have waved a flag that stretched more than 200 kilometers (124 miles). The long blue ribbon is the official flag of the landlocked nation's navy. (11.03.2018)

Chile's top court paves way for abortions in some cases

President Michelle Bachelet and women's rights groups hailed the top court's decision. Abortions will be allowed in cases of rape, risk to a mother's life and signs of fetal birth defect. (21.08.2017)

A court in Chile has convicted three ex-intelligence agents of the 1974 murder of a leftist leader during the Pinochet military dictatorship. Thousands of opponents were systematically exterminated by the brutal regime. (04.01.2018)