Farewell to the last female president in the Americas | Americas| North and South American news impacting on Europe | DW | 17.11.2017

Farewell to the last female president in the Americas

Recent years saw an upswing in female leaders in the Americas, but the region seems set to return to macho culture after Chile's upcoming election. When Michele Bachelet leaves office, will others fill the void? 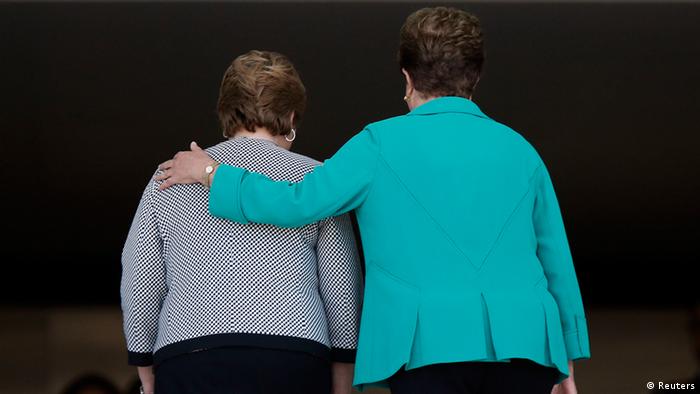 Those were the days: Then-US Secretary of State Hillary Rodham Clinton basked in the moment while surrounded by women's rights advocates, businesswomen and female politicians at the 2015 Women in the World Summit in New York. Back then, the American political establishment was experiencing the advent of emancipation. In Brazil, Dilma Rousseff was elected the country's first-ever female president. Cristina Fernandez de Kirchner had been leading Argentina for eight years. And in Chile, former resistance fighter Michele Bachelet had just won re-election as the country's president.

The cliché of the Americas as a bastion of machismo seemed to have wholly evaporated. And the decades-long fight against military dictatorship seemed to be paying dividends for women: The number of female political and business leaders was on the rise, and legislation for equal rights and against domestic violence was moving forward. 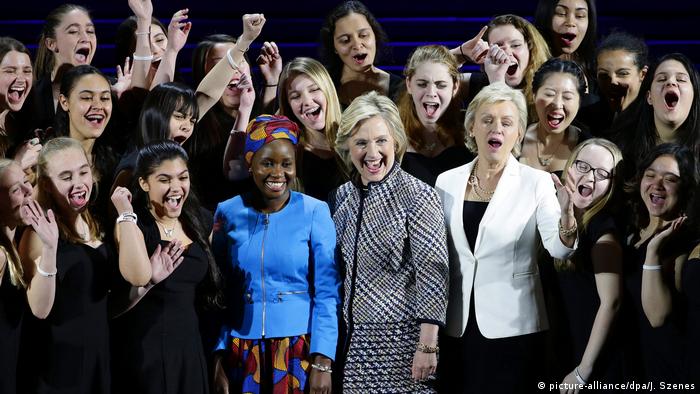 Hillary Clinton, Beatrice Bira of "Heifer International" (in blue), and participants at the "Women in the World Summit" 2015 in New York

There was a spirit of optimism in the USA as well. Indeed, the time seemed ripe for the country to elect its first female president. Hillary Clinton was set on becoming that president, ready to write history as successor to Barack Obama.

Yet the emancipatory flight ended in a crash landing. Brazilian President Rousseff was removed from office in August 2016, Argentina's ex-President Kirchner was in court on corruption charges, and Hillary Clinton suffered a devastating defeat on November 8, 2016.

Michele Bachelet's days as president are also numbered. She will not be on the ballot this Sunday, November 19, when Chileans elect a new president. Her conservative predecessor, Sebastian Pinera, who led the country between 2010 and 2014, is favored to win the post for the center-right Chile Vamos alliance. 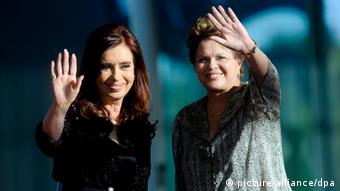 Back into the kitchen?

"The region is in danger of rolling backwards," as Farida Jalalzai, a political scientist at Oklahoma State University, warned in The New York Times. "It is about hanging onto power. When female politicians complain about double standards in politics, they are often accused of playing the 'gender card.'" One thing is certain: When Michele Bachelet's time in office ends in early 2018, there will not be one single female president in the Americas.

And the first signs of shrinkage in the number of female political representatives are also glaringly apparent: In Brazil, for instance, President Michel Temer has just two women in his 28-member cabinet.

Brazil's ex-President Dilma Rousseff, who will be giving her perspective on Brazil's ongoing political crisis next week at the Friedrich Ebert Stiftung in Berlin, says that misogyny and sexism were partly to blame for her removal from office. "They accused me of being overly tough and harsh, while a man would have been considered firm, strong," Rousseff explained to The New York Times. "Or they would say I was too emotional and fragile, when a man would have been considered sensitive."

US presidential candidate Hillary Clinton felt discriminated against for being a woman as well. In her book "What Happened," released this September, she wrote: "I suspect that for many of us – more than we might think – it feels somehow off to picture a woman President in the Oval Office or the Situation Room. It's disconcordant to tune into a political rally and hear a woman's voice booming ("screaming," "screeching") forth."

Emancipation at a snail's pace

Although the political participation of women in the Americas has suffered a setback, there is simply no stopping it in the long run. Globally, the number of female parliamentarians rose from 11 percent in 1997 to 23 percent in 2017. The Americas are actually above average on that count (see chart).

Still, female emancipation has been progressing at a snail's pace over the decades. Experts estimate that it will be 50 years before women are represented in parliaments around the world at a number that adequately corresponds to their overall percentage of the population.

Chilean President Michele Bachelet says she can still remember the great hopes that women put in her when she was running to become the country's first female president. "After a campaign event, a woman came up to me and said: If you are elected, my husband will never hit me again."