With the German elections a month away, Foreign Minister Sigmar Gabriel met for the third time with his counterpart Rex Tillerson. The pair underlined a common understanding of issues surround North Korea and Russia. 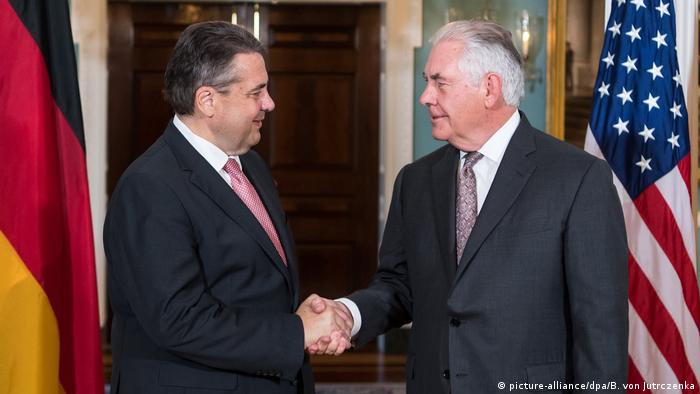 Before German Foreign Minister Gabriel sat down with US Secretary of State Rex Tillerson in Washington for what was a quickly arranged meeting on Tuesday, he first signed his counterpart's guestbook at the State Department.

Even if but a courtesy, the move serves as a sign that Gabriel and Tillerson, who took office within days of other earlier this year, seem to have established a solid working relationship. That is not to be taken lightly: the broader trans-Atlantic relationship has been under constant pressure since the inauguration of President Donald Trump in January.

But at least as far as the top diplomats from Berlin and Washington are concerned, there appears to be a common understanding of key issues facing both countries, a point the German foreign minister made repeatedly to reporters after his talks with his American counterpart. 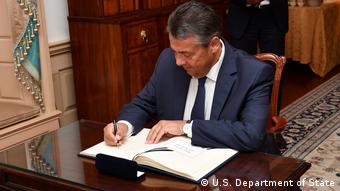 Gabriel's first gesture in Washington was a friendly one

On North Korea, the most pressing issue discussed during the talks in Washington, Gabriel condemned Pyongyang's latest missile test over Japan as a provocation and supported Washington's call for an emergency session by the UN Security Council.

North Korea, said Gabriel, has still not understood that the international community is in complete agreement that not only must such missile tests stop, but so must all of Pyongyang's nuclear weapons programs.

On the new sanctions imposed on Russia by the US Congress, which he and other European politicians had harshly criticized earlier, Gabriel made a more nuanced point. While he reiterated European concerns that US sanctions could lead to "unintended consequences" for Europe's economy, he thanked President Trump for having stated that he will discuss any measures with America's European allies.

Gabriel told reporters that Berlin was pleased that the Trump administration had appointed a special envoy for Ukraine who is to work jointly with Germany on the country's ongoing conflict. He also expressed the need for a ceasefire and the withdrawal of heavy weapons in eastern Ukraine. 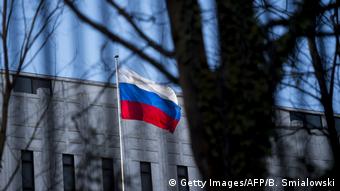 The US passed fresh sanctions against Russia earlier this summer

Gabriel also addressed the nuclear agreement with Iran, which is viewed very negatively by the Trump administration. He noted that while Berlin wants to preserve the deal, Germany - together with France, Britain and the US - is ready to push Tehran to fully comply with all the details laid out in the agreement.

The German foreign minister is also slated to meet former US National Security Adviser and Secretary of State Henry Kissinger before heading back to Germany, where election season is in full swing.

Whether Tillerson and Gabriel meet as frequently in the future as they have done over the past six months remains unclear, not least of which because Germany goes to the polls in four weeks' time, and no one can predict with certainty what the next cabinet will look like. As for his counterpart: with the top US diplomat recently distancing himself from  Trump, speculation has continued about how long he will continue to serve as secretary of state.