At the fourth World Internet Conference, Beijing celebrated its vision of "sovereign internet." Western IT CEOs have to accept this, but DW’s Frank Sieren thinks that China's cyber policy will only cause more isolation. 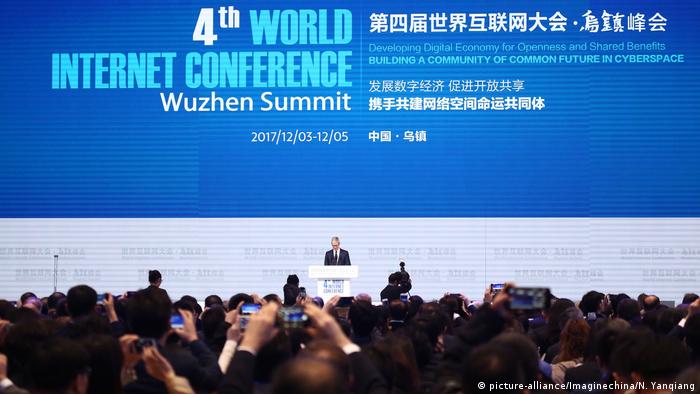 They put on a brave face for a nasty game. Facebook's Vice President of Corporate Development Vaughan Smith and Google CEO Sundar Pichai were two of many IT executives from the West who attended the fourth World Internet Conference in the Chinese town of Wuzhen, where they gave speeches and smiled to the cameras — despite the fact that many of their services are blocked by the host country.

Apple's CEO Tim Cook (above) also spoke of a "common future in cyberspace" even though his company regularly faces criticism at home because of its China-related activities. Critics have pointed to the company's poor working conditions at suppliers such as Foxconn or its decision to remove — at Beijing's request — hundreds of apps and communications services such as Skype from its download store in China.

While in the 19th century, traders and envoys from the West would question how far they should kowtow to the Chinese emperor, today's international IT elite seems to have no such pangs of conscience. It does not want to squander its chance with those who reign over the world's single biggest market of internet users — some 900 million individuals. The Chinese government continues to invest huge sums into Industry 4.0, and the internet has penetrated daily life in China more than elsewhere. If a foreign tech giant is not able to penetrate this market, it will only lose. For Western IT companies, this is regarded as fact. 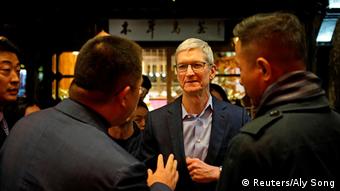 Apple's Tim Cook arrives at the World Internet Conference. He, like other western IT heads, wants to maintain good terms with China.

China's internet is more of a closed system than a world wide web. Foreign websites and apps such as Instagram, YouTube and Twitter are blocked or cannot be used because of download restrictions. And the list of blocked sites is growing. According to Amazon's virtual assistant Alexa, 171 of the world's most popular 1,000 websites are blocked in China. Eighteen months ago, it was 138. State censors comb the internet daily for words and content that in the government's opinion could trigger social unrest. Online subversion, separatism, terrorism and slander are punishable by imprisonment. The state decides what constitutes these crimes.

The internet is monitored particularly strictly during party conferences or ahead of controversial anniversaries. But private chats are also monitored if the government deems fit.Chinese President Xi Jinping calls this "cyber sovereignty.” In his view, every country should be able to restrict and shape internet usage they way it wants.

China's tech giants such as Baidu, Tencent and Alibaba would not have been able to become the most lucrative IT companies in the world without Western competition. It could be that one of the long-term strategies behind the "Great Firewall of China” is to make these firms fit for the global market. It's an unfair but certainly effective method, in particular because Western democracies cannot afford to block Chinese websites and apps. That would not be democratic!

VPNs to be banned?

If they pay a small annual fee, foreigners and about 100 million Chinese users can access the internet through virtual private networks (VPNs). These are able to bypass the Great Firewall via foreign servers. The government currently tolerates them, but this is set to change from February 2018 onwards. The digital hospitality will come to a permanent end. Only foreigners without family commitments or with the character of mercenaries would then be prepared to move to such an isolated country. Even tourists will think twice, given that today's vacationers post pictures in real time of their trips.

Foreign companies will find it harder to communicate with their headquarters, which could make them hesitant to conduct business in China. The idea is to allow them to continue communicating freely beyond China's border through expensive internet connections, but encryption technology might make this exorbitant.

So far, it is not evident things will come to this. Even those burocrats who are supposedly in charge are remaining vague — who knows if they know what they are doing.

An internet blockade would hinder creativity for China's blossoming start-up scene since only those who are up to date with what is going on elsewhere can really be innovative. Many young Chinese entrepreneurs learned this during their time in Silicon Valley, where they also have set up networks. Without Facebook feeds and WhatsApp messages it will become harder for them to nurture their international relations. They did not return to China to be isolated.

The Chinese president said in his opening speech to over 1,500 participants from 80 countries that China would not shut the door to the global internet. But in the course of the three-day summit, it became clear that this promise meant only that Beijing would keep its hand on the door and open it only marginally to foreign companies.

Western IT giants are more interested in how open the door remains than remaining true to their principles. They are convinced that they will have no chance if they are shut out. Facebook's Mark Zuckerberg never misses an opportunity to speak to China's decision makers. At the conference, Tim Cook and Sundar Pichai highlighted what they had already done for China in their speeches. Cook said that 1.8 million Chinese developers used its platform in China and had earned €14 billion ($16.5 billion). Pichai said that Google in the past had given many small Chinese start-ups the chance to promote their products abroad, true to the motto "do good and make it known."

It has yet to be seen what Beijing will do. In any case what's certain is that if Western IT giants were to loudly oppose Beijing, the door would be slammed shut. So their current strategy might be right. At least, in theory.

At the 16+1 summit in Hungary, China further expanded its influence in Eastern and Southeastern Europe. The EU is allowing Beijing to undermine the bloc, DW's Frank Sieren writes. (02.12.2017)

A group of activists bearing Tibet flags turned a friendly game between German and Chinese soccer players into a political event. Beijing’s reaction may have been too harsh, thinks DW’s Frank Sieren.  (23.11.2017)

Donald Trump's 12-day tour might go down in history as being the last attempt to master the shifting of power in Asia. What is clear is that Washington has no clue, writes DW's Frank Sieren. (17.11.2017)