At the 16+1 summit in Hungary, China further expanded its influence in Eastern and Southeastern Europe. The EU is allowing Beijing to undermine the bloc, DW's Frank Sieren writes. 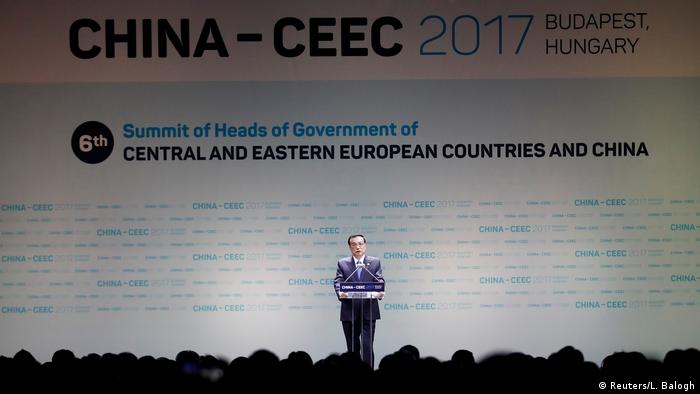 At the annual meeting of the Cooperation Between China and Central and Eastern European Countries, known as 16+1, in Budapest, Premier Li Keqiang said China wanted to "build bridges." He told the gathering that his country's economic investments in the host region would serve "more balanced development in Europe."

Development of infrastructure development may indeed become increasingly more balanced, but with China's bridges comes a tunnel that will undermine the EU's authority. Over the next few years, China intends to invest $3 billion (€2.5 billion) into 16 countries in Central and Eastern Europe, including 11 EU member states.

Referring to the summit 1+16 would make more sense because it is China — as the world's No. 2 economy by gross domestic product — that is setting the tone.

China is not doing this for altruistic reasons, and officials have never made any effort to convince potential partners otherwise. If construction projects are financed by Chinese banks, then they will also be built by Chinese workers. In return, Beijing would like some gratitude from politicians in the countries where it is active. China already has interests in Hungarian car factories, Serbian steelworks, Romanian oil refineries, Albanian airports and Croatian power plants. At the summit, Li and Hungary agreed to modernize a railway line that will enable goods that arrive in the Greek port of Piraeus, which is controlled by China, to get to the Central European market more quickly via Serbia and Hungary.

There's a perception that the European Union neglects its eastern member states, which makes officials in such countries all the more grateful for China's lucrative investment programs. And, in West Balkan states still waiting to be granted EU membership, there is a sense that at least Beijing is taking them seriously.

The interest is a real problem for the EU. "China's investments in Eastern Europe contain the danger of a deepening division within the EU," the German member of the European Parliament Bernd Lange, a Social Democrat, recently warned. He is far too cautious in his wording: There is not only a danger — the division is already deep.

China's credit-based investment aid not has not only elicited gratitude, but has also created political allies to help the country further expand its influence. This summer, Greece — which President Xi Jinping once described as China's "most reliable friend in Europe" — used its influence to stop the EU from being more robust in condemning territorialism in the South China Sea or restricting the country's investments within the bloc.

And Central European leaders such as Czech President Milos Zeman or Hungarian Prime Minister Viktor Orban are open about their admiration for China's authoritarian governmental system and welcome the fact that — in contrast to decrees from Brussels and Berlin — Beijing does not lecture them on the rule of law, democracy and refugee policy. "The world is changing," Orban said on Monday in Budapest. "China has the resources to enable developments that would be impossible with EU funding alone."

The European Union should put more effort into driving its own infrastructure projects, such as the West Balkan road and energy networks that were announced as part of the Berlin Process. Countries that seek to join the European Union — such as Serbia, which cannot yet receive the EU's Structural and Investment Funds — do not necessarily much where they get necessary money from. What's important is progress. The European Union is too slow, too divided, and has increasingly less money.

All this has helped Beijing expand its sphere of influence without anyone putting on the brakes. The "one EU" policy that Reinhard Bütikofer, a German Green in the European Parliament, has called for was inspired by Beijing's "one China" policy, but so far it is not working. Why should China agree? Well, there is one argument: Beijing and a stable, powerful EU could work together and position themselves against the United States — especially on the issues of trade and North Korea.

China, however, appears to have more of an interest in infrastructure projects and competition with the European Union than in a stable multipolar world order.