The German Book Prize jury has announced its shortlist of the year's six best German language novels including two books by first-time authors. 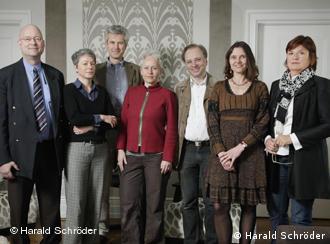 The German Book Prize jury announced its shortlist of the year's six best German-language novels on Wednesday. The seven members of the jury, consisting of literary critics, journalists and members of the publishing industry, sifted through a total of 198 books all published between October 2010 and September 2011.

Two first-time authors have made the shortlist: Jan Brandt was nominated for his 1000-page novel "Against the World" set in an East Frisian village in North West Germany, as has Eugen Ruge for his novel "In Times of Fading Light," the story of the intergenerational political conflicts in one family living in the German Democratic Republic of the former East-Germany.

The prize is an annual showcase for the very best contemporary German language literature and secures winners a place on the bestseller lists in Germany. The winner of the prize will receive 25,000 euros ($34,300) with each of the five runners-up receiving 2,500 euros.

"The decision making process was really difficult for us," said jury member and spokeswoman Maike Albath. "West German dystopias are on the list alongside laconic society novels about the German Democratic Republic. The heroes of the works find it difficult to come to terms with their native land and origins."

"The books give readers a sense of not only the East German underclass and the Nomenklatura, but also student life in West Germany and the East Frisian provinces or the globalized ambience of a security firm," she said

The German Book Prize was founded by the German Publishers and Booksellers Association in 2005. Previous winners include Melinda Nadj Abonj (2010), Kathrin Schmidt (2009) and Uwe Tellkamp (2008). This year's winner will be announced on October 10, on the eve of the opening of the 2011 Frankfurt Book Fair.

"Venushaar" ("Maiden's Hair") is the title that made him known to German readers - one of four novels by the celebrated author Michail Schischkin. Some have hailed him as the next Tolstoy. (16.06.2011)