German officials have condemned a recent video depicting a screaming mob of anti-migrant protesters blocking a bus full of refugees. Another video shows a scared child being dragged off the bus by a police officer. 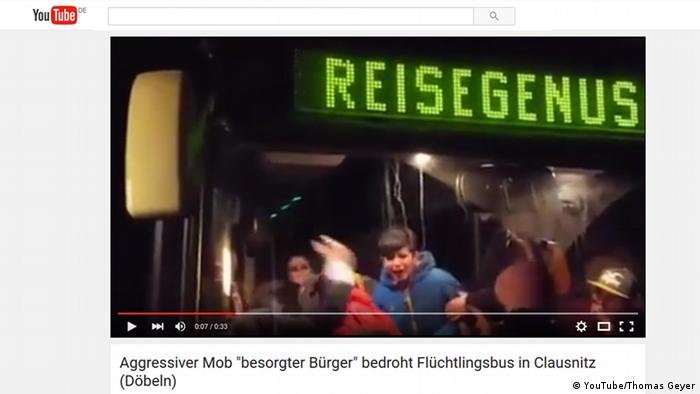 A viral video showing a blockade of xenophobic protesters stopping a bus carrying refugees in the eastern German state of Saxony, sparked outrage on Friday.

The glowing sign on the front of the bus roughly translates to "pleasures of travel," and is starkly contrasted with the terrified faces of the migrant passengers. The video showed women and children crying as the protesters chanted "We are the people!" and "Go home!" in German.

Saxony police spokesman Rafael Scholz said the protest occurred late Thursday in Clausnitz, 30 kilometers (19 miles) south of Dresden. Around 100 people took part in the protest and hindered the bus from arriving at a local refugee shelter.

Scholz added that police are investigating verbal threats of violence. So far, there have been no arrests.

Saxony's Interior Minister Markus Ulbig harshly criticized the protesters on Friday, saying it was "deeply shameful the way people were being treated."

A second video of the incident has also drawn harsh criticism. It depicts a German police officer forcibly dragging a young migrant boy off the bus and into the refugee housing.

The tweet below says: "A longer video which shows the way Saxony's police dealt with the frightened refugees."

So far no reasons for the harsh treatment have been given, but Ulbig said in a statement on the Saxony police Facebook page that the second video and the police involved are being evaluated. "Only then can we draw conclusions," added Ulbig.

In light of the refugee crisis, figures have shown that right-wing violence in Germany almost doubled in 2015, compared to 2014. Politicians and activists are worried that the numbers will continue to rise.

Denmark is defying international outrage and pressing ahead with plans to force refugees to hand over valuables in return for providing sanctuary. Trine Villemann reports from Copenhagen. (25.01.2016)