Denmark′s daylight robbery of refugees | Europe| News and current affairs from around the continent | DW | 25.01.2016

Denmark is defying international outrage and pressing ahead with plans to force refugees to hand over valuables in return for providing sanctuary. Trine Villemann reports from Copenhagen. 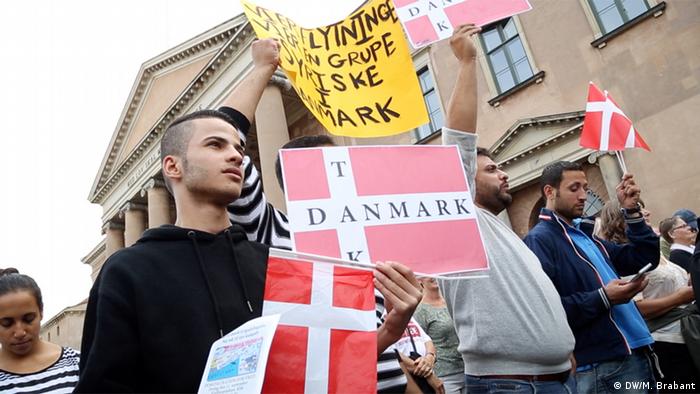 The letter that landed on the desk of Integration Minister Inger Støjberg contained a ring. It was the family heirloom of author Christian Mørk, who wrote, "My great-grandfather came from Russia to Denmark in the 1860s. As far as I am aware, my great-grandmother was not asked to hand over her valuables when she reached the Danish border but thinking of those who will now suffer this humiliating experience, I am sending you my grandmother's ring." 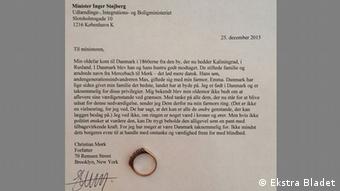 The letter caused a huge stir

Mørk posted the letter with a photograph of the ring on Facebook. Within minutes the debate was raging, once again showing the division over the government'sproposal to let refugees and migrants cover some of the costs of their stay in Denmark.

"What a stupid letter. When people came here in the 1860s they were not handed a bag of money, free education, and health care. They had to find a job and support themselves. You cannot compare the two," wrote Kirsten Marie Waade.

Lis Greve, a supporter, posted, "It's disgraceful that migrants and refugees have to hand over what they own in money and valuables. It's like when the Jews were robbed by the Nazis. Is that where Denmark is heading?"

The measures, seen by some critics as comparable to systematic Nazi robbery from Jews, and designed to dissuade migrants from seeking asylum in Denmark, are due to be ratified by parliament in Copenhagen on Tuesday. Danish politicians have been unmoved by fierce criticism.

Minister Støjberg, widely regarded as a hardliner on integration and migrant matters, has been unrepentant.

She wrote on Facebook, "I am aware that some international media are banging on about the fact that Denmark in the future will seize valuables form refugees in order for them to pay for their stay in asylum centers. This criticism is unwarranted as Danish law already states that people on benefits, who own valuables worth more then 10,000 kroner, ($1,451/1,340 euros) can be forced to sell them off before being able to receive benefits. It is a principle in Denmark that those who can provide for themselves also have to. It applies to those who already live here and now it will also apply to those who just arrived here."

The first draft of the controversial legislation was tougher than the version parliament will finally ratify. Originally, the government wanted to seize cash and valuables worth more than 3,000 Danish kroner (400 euros). 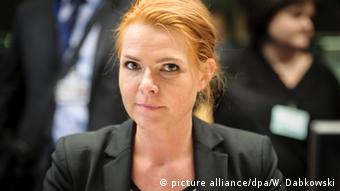 Støjberg has dismissed allegations that the new measures are xenophobic

Public reaction, however, has forced the government to water down the measures and Danish Prime Minister Lars Løkke Rasmussen calls it "the most misunderstood ever." Danish authorities can now ransack the belongings of refugees and migrants and seize cash and valuables worth more than 10,000 Danish kroner (1,340 euros), but jewelry of a sentimental value, including wedding bands, is exempt.

Government efforts at damage limitation, which have tried to persuade international critics that refugees must face the same level playing field as Danish benefits claimants, have failed.

The Danish Foreign Minister Kristian Jensen was summoned to Geneva by the UN Human Rights body to explain his country's shift in policy. The UN refugee agency, the UNHCR has warned that the new bill could fuel fear and xenophobia, while Amnesty International has condemned it as a "discriminatory practice" singling out refugees already traumatized by war.

The seizure of jewelry and cash from refugees and migrants, is just one small component of the center-right minority government's campaign to deter people from showing up and asking for asylum. 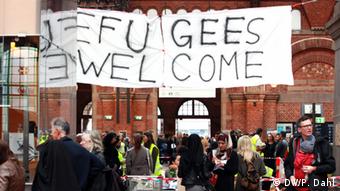 For how much longer?

At the heart of the new tougher law is the issue of family reunification. The waiting time for people who have been granted asylum will be extended from one year to three, a change that according to many experts is in breach of the European Human Rights Convention. Danish Red Cross calls the change a "humanitarian catastrophe" but Støjberg is prepared for the consequences. "We are right on the edge of the international conventions with this," she said. "Are we in breach of them? Let's see. We are ready to take on any lawsuits stemming from this change. Denmark's immigration policy is decided in Denmark, not in Brussels."

The author Christian Mørk does not share Støjberg's stomach for a fight. Just a few hours after posting the letter and the picture of his grandmother's ring, he took it down.

"I was naive," he said. "And not at all prepared for the hate and anger my letter to the minister sparked but hopefully I have managed to get my point of view across."