′Selfie monkey′ on the brink in Indonesia | Environment| All topics from climate change to conservation | DW | 04.04.2017

'Selfie monkey' on the brink in Indonesia

Best known for its viral self-portrait, the crested black macaque is also a part of the local indigenous community's diet. But an appetite for bush meat is among the factors threatening the iconic monkey's survival. 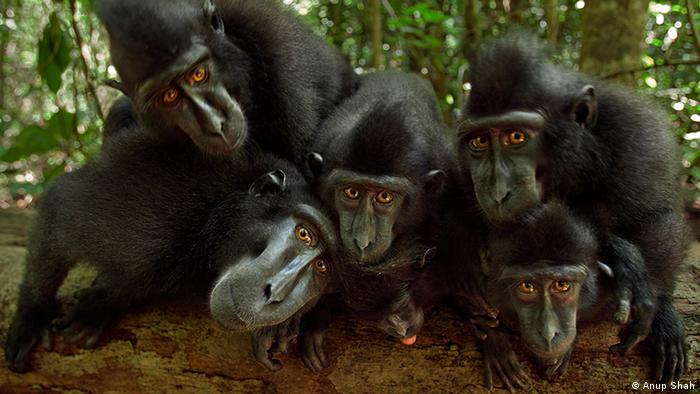 Indonesia's famous "selfie monkey" is facing a fight for survival as local indigenous communities hunt the animal for its meat.

The black crested macaque (Macaca nigra) is currently listed as critically endangered by the International Union for Conservation of Nature (IUCN). It's estimated that only 4,000 to 6,000 individuals currently live on Indonesia's Sulawesi Island.

In 2014, a macaque named Naruto made headlines after taking a number of "selfies" with a wildlife photographer's camera. The photos became the subject of a legal dispute, in which animal rights group PETA ultimately failed in arguing that Naruto should own the copyright to his image. 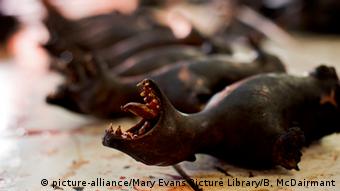 The meat of the crested black macaque is highly prized by the Minahasan community, a mostly Christian ethnic group that typically takes no issue with consuming exotic wildlife, unlike most other Muslim-majority communities in Indonesia.

"I like the taste, hot and spicy, it is similar to wild boar or dog," Nita, a 32-year old local Minahasan, told the news service AFP.

Trade in exotic creatures is booming as a result, with burnt and often mutilated macaques on offer at local markets alongside pythons, bats and dogs.

This demand has pushed hunters beyond their normal range in search of the monkeys, often reaching remote parts of the island to hunt.

Daphne Kerhoas from the Bristol Zoological Society spent two years in Indonesia studying the macaque population as a part of the Macaca Nigra Project, which studies the black crested macaque in northern Sulawesi while promoting conservation efforts. She told DW that the meat of the monkeys is still widely considered a delicacy by communities in the north of Sulawesi - but is not an important source of protein.

"The Minahas people are not hunting for sustenance," Kerhoas told DW. Crested macaques are seen as a delicacy, sought after for weddings, Christmas meals and birth celebrations, she explained.

"In this case, value in their survival should be promoted, as well as a discussion on the impact of hunting on population size." 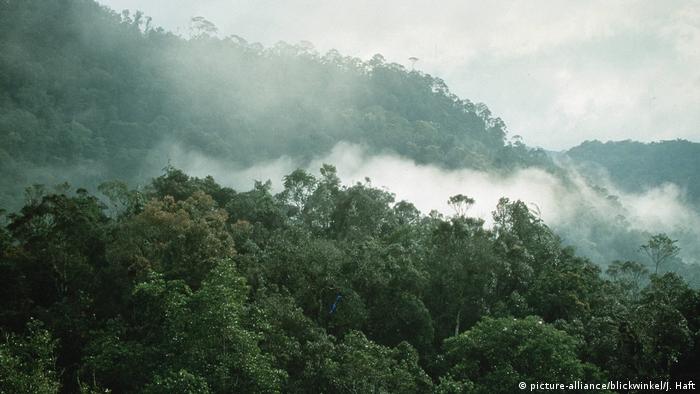 Humans have been increasingly encroaching on forest on Indonesia's Sulawesi Island, habitat of the back crested macaque

Efforts to ensure the macaques' survival have increased in recent years, as conservation groups attempt to change these long-held cultural practices.

Although the species is officially protected under Indonesian law, few people are aware that they may face up to five years in prison if they are caught hunting the monkeys - and so the practice continues.

Associate professor Antje Engelhardt from Liverpool John Moores University is also the head of the Macaca Nigra Project. She told DW much of these initiatives focus on educating the community, starting with school children and university students.

"We bring the schoolchildren to the forest so they can get to know the monkeys … most of the children have never seen a monkey in the wild, they mostly know them from having them on their plates," said Engelhardt.

"They get to know the monkeys, so they become more sympathetic as well."

Although Engelhardt says the community generally responds well to the conservation work, difficulties remain. "You have to work with authorities, who sometimes don't understand themselves why they need to protect the macaque, because they are often seen as agricultural pests."

Kerhoas agrees that community engagement comes in different facets in order to succeed - she adds that tourism can also help save the black crested macaque from extinction.

Tourists stay and eating in the local home-stays, pay nature reserve entrance fees and local guides to show them the endemic fauna and flora. "Fortunately, international and national eco-tourism generates income in this area," Kerhaos said.

In addition to over-hunting by humans, the macaque faces a number of other threats to its survival in Indonesia, including deforestation: Expanding local settlements and agricultural lands have degraded and destroyed habitat.

The monkey has even become a part of the illegal pet trade, as its habitat quickly shrinks.

Kerhoas says that a combination of these threats mean the black crested macaque has been included in the world's 25 most endangered primate species of 2016 to 2018.

But local rescue groups are doing what they can to ensure the survival of the monkey.

The Tasikoki Wildlife Rescue Center receives macaques that have been kept as pets, gradually reintroducing them into a captive social group, Kerhaos said.

Scientists from the Macaca Nigra Project are present year-round in the Tangkoko Nature Reserve to report illegal activities and traps.

Deforestation to make way for cocoa plantations is having a devastating impact on spider monkeys. But a conservation project in the Ecuadorian rainforest is helping farmers to change their ways. (04.04.2017)

Each year, several million wild frogs are sold in supermarkets around the world. A study suggests most species aren't labeled correctly. The trade in frogs' legs is out of control, the authors warn. (01.03.2017)

Delhi's menacing monkeys terrorize the city, breaking phones, stealing food and attacking people. A sanctuary set up on the city's outskirts in 2007 to deal with the problem has in some cases actually made it worse. (21.02.2017)