Secrets of ′Pan-European Picnic′ still shrouded in mystery 30 years later | Europe | News and current affairs from around the continent | DW | 19.08.2019

A picnic in a meadow on the Hungarian-Austrian border: That was the plan. But the symbolic event, a show of support for a united Europe, enabled the first exodus from behind the Iron Curtain. Unintentionally — or not? History's great moments sometimes start out small — like on August 19, 1989. The day certainly didn't seem promising: Heavy, gray clouds filled the sky near the Hungarian town of Sopron, just a short walk from the Austrian border. A picnic had been planned — but not any ordinary picnic. This was to be a "Pan-European Picnic," a political, symbolic gathering right by the border fence, a show of support for a Europe free of barriers.

The barbecues and beer were indeed a washout. A heavy downpour extinguished the barbecues before they had time to heat up. The day would not even merit a footnote in the annals of history, had a rare combination of opportunity, chance, and determination not come together and fired up all the people there.

By the end of the day, almost 700 East Germans had crossed over from Hungary to the West. They stormed the flimsy wooden gate at the border and stumbled to freedom in the Austrian town of Sankt Margarethen im Burgenland.

Hansi and Arpi caught, quite literally, in the middle

In 1989, Austrian Chief Inspector Johann "Hansi" Göltl and Hungarian Lieutenant Colonel Arpad "Arpi" Bella were on duty on opposite sides of the Austrian-Hungarian border. Reminiscing to journalists 25 years later, Göltl said, "We had Glocks. Nine millimeter! The Glock's a disaster; it discharges far too easily, and we had to leave the safety catch off while we were on duty." 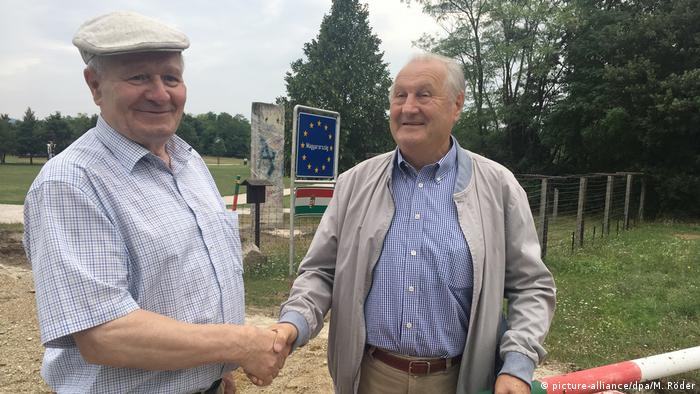 Johann Göltl, left, and Arpad Bella both did their parts to let 700 East Germans cross into Austria

To this day, the two men are puzzled by what swept over them like a force of nature just before 3 p.m. that day. They were standing at the border, waiting for the arrival of the political picnickers they'd been told to expect. It was difficult to survey the meadow on the Hungarian side; a hill obstructed the view. All of a sudden, hundreds of men, women and children appeared, marched down the hill, then they sped up, ran past Arpi and a handful of other border guards, pushed open the border gate, and seconds later found themselves standing in Austria. They'd reached the West.

Thousands more would follow. In the summer of 1989, East Germany was on its last legs. The country was in economic free fall; even as Erich Honecker and his government disseminated propaganda celebrating the 40th birthday of the "workers' and farmers' state," the people were already protesting. East Germans started to vote with their feet.

In August 1989, tens of thousands of East Germans had gone on holiday to the area around Lake Balaton in Hungary, the westernmost of the Eastern Bloc countries. Rumors were circulating that the border with Austria was porous. In fact, there had already been a symbolic cutting of the border fence in May by the two countries' foreign ministers, Austria's Alois Mock and Hungary's Gyula Horn.

For the East Germans, it seemed like an opportunity — so much so that many people allowed their Hungarian visas to expire and stayed on, secretly preparing for their own great escapes. Local Hungarians provided tips on which watchtowers guards sometimes left empty and the best way to approach the border unseen.

The day of the Pan-European Picnic, an idea that sprang from Otto von Habsburg, the son of the last Austro-Hungarian Kaiser and president of the Paneuropean Union — was an ideal opportunity to flee East Germany.

Who helped them escape?

Hungary had already taken significant steps to water down its Socialist state doctrine. A year before the historic picnic, the government in Budapest had granted its citizens the freedom to travel. In 1988, the Hungarian minister of state, Imre Pozsgay, described the Iron Curtain as "morally and politically outdated." Hungary did not want to have to go on acting as "minder" for the tens of thousands of East German vacationers coming to Lake Balaton.

Even 30 years on, the question of who orchestrated the events of August 19, 1989, remains unanswered. Was it the newly formed Hungarian opposition? Or the Kaiser's son, in absentia? Otto von Habsburg was represented at the picnic by his daughter, Walburga. Or the secret service? Or perhaps some combination of all three? 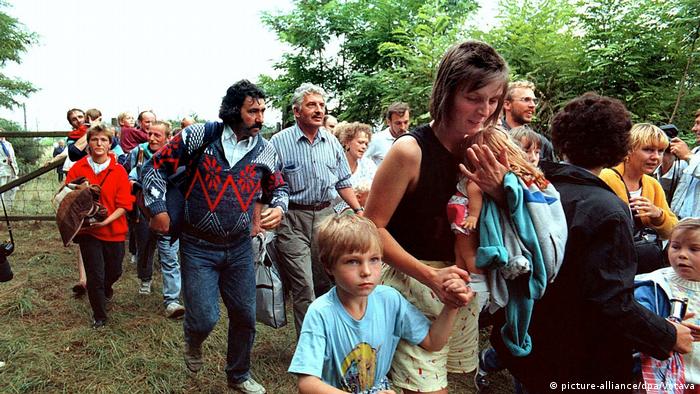 Walburga von Habsburg said her father came up with the idea of the political picnic, and that permission was expressly obtained from the Hungarian government. However, many people still support the theory that the barbecue was organized by the newly formed opposition alliance, the "Hungarian Democratic Forum" (MDF), to test Hungary's democratic process.

One very intriguing piece of the puzzle is that the Hungarian Charity Service of the Order of Malta were contacted in the run-up to August 19 by one of the picnic's patrons — none other than Minister of State Pozsgay. The Knights of Malta were looking after the East German tourists who had come to Lake Balaton not to swim but to try and escape to the West. Pozsgay conveyed the message that the border would be open for a few hours and that the East German holidaymakers "would be able to find the way if they happened to be in the area."

The remarkable proliferation of leaflets

The Hungarian opposition and the Paneuropean Union agree on one point: To this day, they're both amazed at how that afternoon's events developed a momentum of their own.

Many suspect there were other forces discreetly, but effectively at work behind the scenes. Laszlo Nagy, a former MDF activist, said he found it surprising that a chauffeur at the West German Embassy in Budapest distributed sacks full of leaflets around Lake Balaton in advance of August 19 — "invitations" to the picnic printed in German and Hungarian. The undercover role of West Germany's intelligence service and other security services is now regarded as an open secret.

With so many machinations in the background, Arpad Bella and his fellow Hungarian border guards faced a dangerous dilemma. It was their job to stop the fugitives, if necessary by force of arms. Allowing them to pass was a serious dereliction of duty. But Bella found a mischievous way around the problem: The Hungarians turned their backs on the 700 people storming towards the gate and focused on meticulously checking the Austrian picnic guests' documents.

But was it a daring act of heroism or a calculated piece of acting? 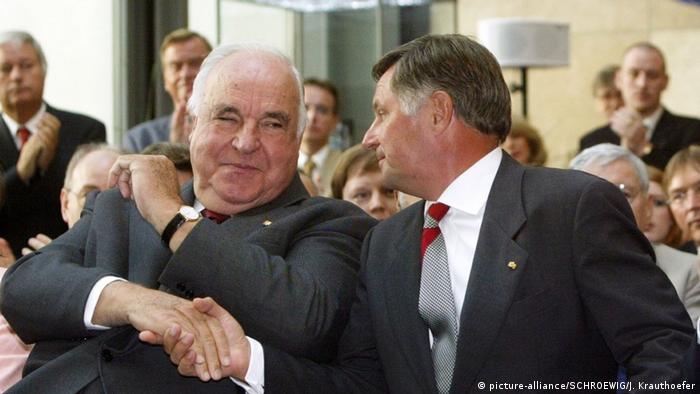 Did political leaders like Kohl, right, and Hungarian Prime Minister Nemeth Miklos know what was going on all along?

When Austrian guard Göltl, who experienced the storm of East Germans from the western side of the border, told the former West German Chancellor Helmut Kohl years later about Bella's daring move he said the Hungarian was immediately subjected to disciplinary proceedings.

Kohl reportedly replied by calling Bella's boss an idiot: "It was all agreed beforehand."