The latest standoff between Italy and the EU over sea rescues has ended, with the 47 migrants disembarking in Sicily. But German charity Sea-Watch now fears it could be prosecuted and have its boat impounded. 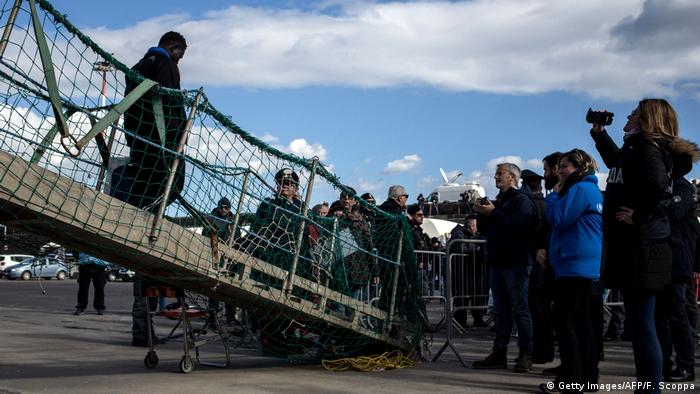 Dozens of migrants stranded on a rescue ship off the coast of Sicily have been allowed to disembark on Friday.

The Dutch-flagged ship, run by German charity Sea-Watch, was carrying 47 migrants and had spent several days at sea while Italy demanded other European states take in its passengers.

There were cheers and hugs for the crew as the migrants disembarked. They were then shuttled to shelters to make formal asylum requests. 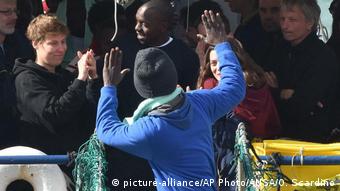 The migrants were allowed to disembark, after being rescued off Libya over a week ago

The migrants will be distributed between Germany, France, Portugal, Romania, Malta and Luxembourg under a deal Italian Prime Minister Giuseppe Conte struck with other EU states earlier this week. It is unclear if Italy will host any of the migrants.

The ship, docked at the port of Catania on Thursday after being escorted by Italian coast guard ships.

Two days earlier, the European Court of Human Rights (ECHR) ordered Italy to provide medical assistance, food and drinks to the migrants who had been stuck at sea since they were rescued off Libya on January 19.

Italy's populist government has repeatedly clashed with the EU over its refusal to allow humanitarian ships to dock at its ports unless other member states agree to take in migrants.

"We hope for the best and expect the worst," Sea-Watch tweeted after it was directed to dock at Catania, where the prosecutor is known for taking a hard line against charity ships.

nn.cw/ng (AFP, AP, dpa, Reuters)Every evening, DW's editors send out a selection of the day's hard news and quality feature journalism. You can sign up to receive it directly here.

Germany is suspending participation in Operation Sophia, the EU naval mission targeting human trafficking in the Mediterranean. The decision reportedly relates to Italy's reluctance to allow rescued people to disembark. (23.01.2019)

Prosecutors in Sicily say Interior Minister Matteo Salvini held 177 migrants hostage by stranding them on a ship. The European Council has expressed concern about xenophobia in Italy. (25.01.2019)