Saving Canada′s only desert | Environment | All topics from climate change to conservation | DW | 12.08.2016

Most people don't even know Canada has a desert - the Okanagan is an anomaly in a country known for snow. But the Okanagan Desert is threatened - scientists and indigenous people are now working to protect the ecosystem. 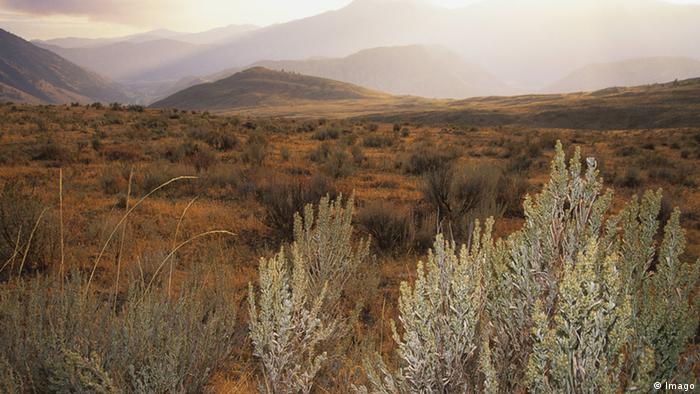 Driving into the town of Osoyoos, British Columbia, visitors notice the landscape becomes drier. The lodgepole pines and Douglas fir trees that dominate the Okanagan Valley's forests become sparse. If you look closely enough, you may even spot a cactus.

Known as the hottest place in Canada, Osoyoos is surrounded by the Okanagan Desert, a semi-arid region that is home to hundreds of plant and animal species unique to the area.

This region is particularly special, Lael Parrott, director of the Okanagan Institute for Biodiversity, Resilience and Ecosystem Services at the University of British Columbia told DW.

"It is the northern range of many species that are going to need to migrate and expand their ranges northward with climate change," Parrott explained.

The desert, which is actually an antelope-brush ecosystem, is one of the country's most endangered habitats. Only 50 square kilometers (5,000 hectares) of the antelope-brush area remains - less than 9 percent of its original size. 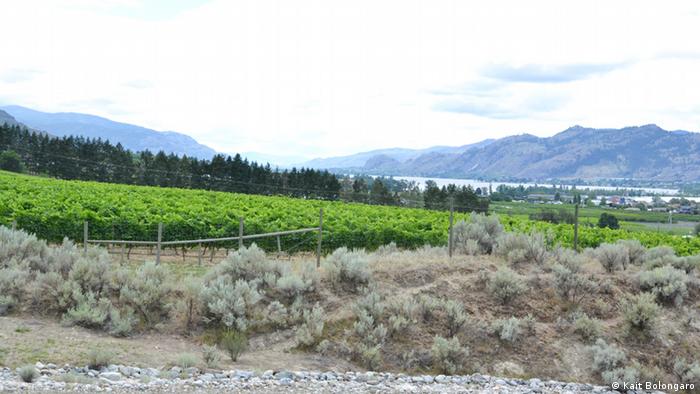 "As we convert and fragment the land for other uses, we lose the benefits from this natural landscape around us," Parrott told DW.

To ensure the region's survives human-caused pressures, conservationists and indigenous people are working to protect the ecosystem.

A few kilometers north of Osoyoos, a wooden boardwalk snakes through 67 acres of antelope brush at the Osoyoos Desert Centre. Nearly 10,000 people visit the site each year - some of whom have never heard about Canada's only desert. 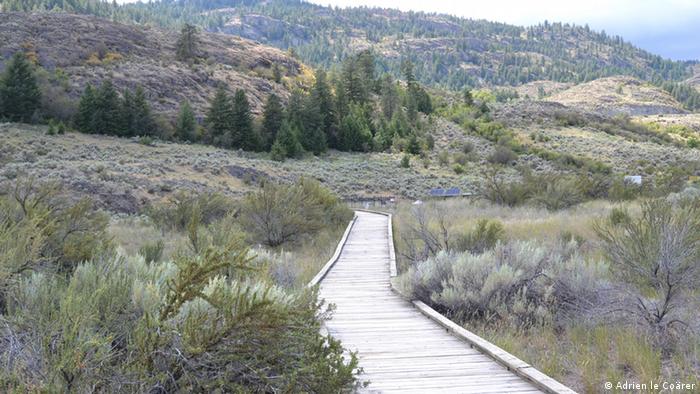 "[People] are often surprised - and delighted - to find out such an environment exists in Canada," said Denise Eastlick, the society's executive director.

Ecological restoration - that is, facilitating recovery of a degraded or destroyed ecosystem - is also rejuvenating the habitat. This includes the strategy of eliminating invasive species that threaten native plants. Volunteers gather each spring to remove plants such as knapweed and Russian thistle from the property.

Nonnative species are also a problem - but conservationists are using them against each other.

The Mecinus janthinus weevil, similar to a small beetle, was introduced to control the Dalmatian toadflax, a hard-to-remove plant that shoots out its seeds when pulled out. By feeding on the toadflax's shoot, the weevil larvae damage its growth tissues.

"The program has been a great success so far as a bio-control agent to help keep the population of the Dalmatian toadflax in check," explained Skye Eriksen, an interpretive guide. 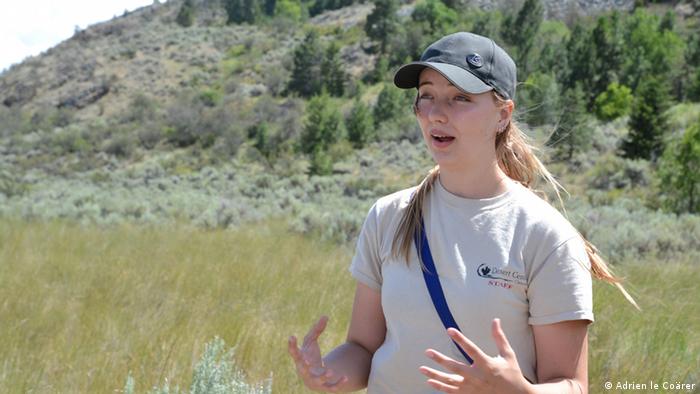 Seed mixes also play a role in reviving native species. The conservation initiative works with local businesses, such as vineyards and a golf course, as well as with gardeners to help them choose local grass varieties such as yarrow, rabbitbrush, and golden aster for landscaping.

Habitat restoration also supports wildlife by providing habitat and food. Species such as the Great Basin spadefoot, the Behr's hairstreak butterfly and the desert night snake are only found in British Columbia's southern interior.

"Because of the concentration of rare and at-risk species, and its rich biodiversity, this region is of national importance," Eastlick told DW.

At the Nk'Mip Desert Cultural Centre, researchers are working to preserve local snake populations, including the western rattlesnake.

Both regional and federal endangered species registries consider the reptile to be vulnerable. Humans remain their biggest threat.

"Rattlesnakes are notoriously maligned, misunderstood, and feared around the world," said Jared Maida, a biologist at the cultural center. 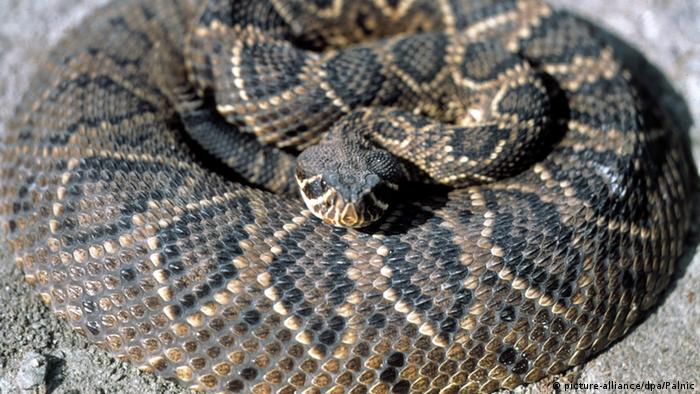 Though they get a bad rap, rattlesnakes play an important role in the ecosystem

Despite their reputation, the animals are integral to maintaining biodiversity in the desert.

"They are an important link in the food web, linking small animals to the larger macro-fauna," the scientist told DW.

But not all residents agree with conservation efforts. A proposal to designate part of the region a national park has created controversy, particularly among cattle ranchers who use the grasslands to graze their herds.

'The land is our mother'

For the Osoyoos Indian Band, protecting the antelope-brush desert goes beyond environmental concerns: it is part of preserving the Sylix culture of the Okanagan Nation. Sylix is the people's traditional name for themselves.

"Everything goes back to land being our mother," said Sherry Stelkia, an elder and leader in the community. "So preserving it is like taking care of our mother."

Younger members of the community share their knowledge of traditions with visitors at the cultural center. Wild sagebrush harvested from the desert is dried and used in smudging ceremonies to cleanse negative thoughts. Pine needles are tightly woven into waterproof baskets. 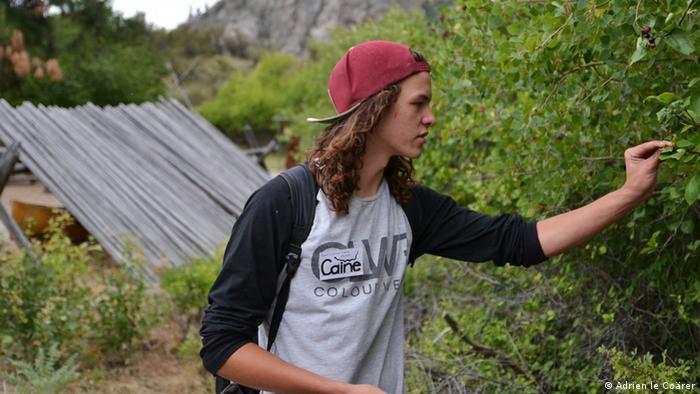 "I enjoy [giving tours]. It's really good to keep the culture going," said Caine Kruger, a young member of the Osoyoos band. "[The culture] is not something we want to lose."

Many of the traditions have been shaped by the relationship between people and the land, which is sacred for the Sylix people.

This connection to the land is also being cultivated in the next generation, among youth who see the desert as an integral part of their culture.

"The land means a lot to me," Kruger told DW. "I don't want it to be turned into skyscrapers."

In the sun-drenched state of Nevada, students passionate about the environment are fighting for solar and other green energy at their school in the face of big opposition. (26.07.2016)