UNESCO seeks to protect natural wonders in the high seas | Environment | All topics from climate change to conservation | DW | 04.08.2016

UNESCO is proposing adding sites in the high seas to the World Heritage List. These natural wonders are in international waters. Heritage status could help protect them against pollution and overfishing.

While I was struggling to finish my scuba diving training, I came across a statement on the internet: "Scuba diving is like entering a different planet." That settled it for me: I never thought about dropping out of my diving course ever again - and finally got my certificate.

Sometimes, the internet is indeed right, I found out later.

Many people might think there is nothing down there in the oceans but rocks, darkness and a lot of water. In fact you find a whole new world, full of life - stretching as far as the eye can reach.

Most of these unique places, though, cannot be protected, because they belong to what is known as the "high seas".

"Half of our planet is beyond national jurisdiction," Fanny Douvere, coordinator of the World Heritage Marine Programme, told DW. "It's ocean, and belongs to nobody. So it is very much the wild west: Everybody can go there and extract resources."

Douvere says that some two thirds of these amazing places so far off in the oceans are already suffering from unsustainable fishing.

UNESCO's World Heritage Centre wants to change that - by starting to inscribe those spots on the World Heritage List. That would bring international recognition of their protection status.

Up to now, adding sites in the high seas is not possible, as countries themselves have to apply for one of their national sites to be added to the list. 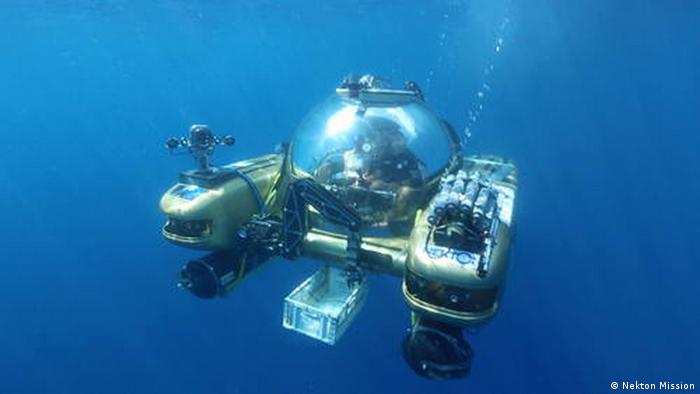 In a report (pdf) launched this week, UNESCO's World Heritage Centre and the International Union for Conservation of Nature (IUCN) propose five sites that they think are definitely worthy of World Heritage status.

Some of them were discovered just a few years ago.

"These places are just absolutely phenomenal, they are the Grand Canyons of the high seas," Douvere enthused. "They include some of our biggest volcanoes and some of our most fantastic wildlife gathering points - it is mind-blowing."

Douvere can tell, because she was lucky enough to see one of these places herself: the Sargasso Sea around the islands of Bermuda. A marine biologist, she went there with a submersible - down to a depth of 200 meters - deeper than any scuba diver can go.

Still, many places on the list are even deeper down in the ocean, down to 5,000 meters.

"It is an entirely different kind of life," Douvere says. "Some of these things are not even driven by the light of the sun." Yet even in those remote locations, there is lots of life. 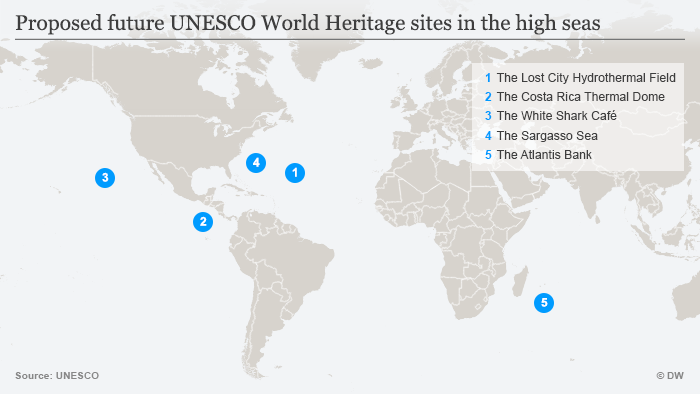 The five spots UNESCO and IUCN experts say stand out from many other wonders in the ocean are two places in the Atlantic Ocean, two in the Pacific and another one in the Indian Ocean.

They include a sunken coral island, floating underwater rainforests, undersea volcanoes and a favorite meeting point for Great White sharks.

"It makes no sense to not include these places on the World Heritage List, because they are so evidently part of our human heritage," Douvere says, adding that our children and granddchildren should be able to experience them in the same way as we are doing today. 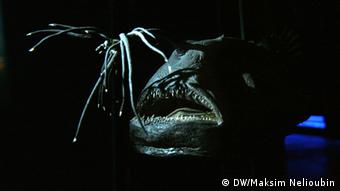 The UNESCO World Heritage Program was created in 1972. Today, it lists 1052 sites, 203 of them natural, such as the Great Barrier Reef in Australia, the Galapagos islands and the Wadden Sea in Germany.

Adding sites in the high seas, though, is "an idea whose time has come," UNESCO says.

The status of a World Heritage Site would be "the best mechanism to protect these unique places," in Douvere's view, as nearly every country in the world has ratified the World Heritage Convention.

The report published jointly by UNESCO and IUCN comes to the conclusion that adding high sea sites to the World Heritage List would be possible and "does not require any change in the definitions of natural and cultural heritage."

What is still unclear, though, is the procedure for the inscription and later protection of such areas. The report suggests three legal options: a 'bold' interpretation of the 1972 World Heritage Convention, an amendment outside the terms of this convention or the negotiation of an optional protocol.

"It is now up to the World Heritage members, that is the groups of countries, to come up with ideas on how it can be done," Douvere told DW.

The first step, though, has already been taken. The experts have taken a look at the other half of the planet not covered by the World Heritage Program as yet, to assess what is out there.

"We want to connect these far-off places where people think there is nothing there with places that people do cherish, like the Serengeti in Africa and the Great Wall of China," Douvere says. "Everybody finds it common sense to protect those places." And that is what UNESCO would also like people to think when it comes to floating rainforests deep down in the ocean.

By now, you've probably heard that at least 90 percent of the Great Barrier Reef has been affected by a global bleaching event. But these "rocks" on the seabed play a key role for life in oceans - and for people, too. (02.05.2016)

Reefs discovered at mouth of the Amazon

Scientists have found reefs in the gloomy waters beneath outflow from the Amazon River. But with study of these unique ecosystems barely underway, they are already threatened by oil drilling. (25.04.2016)