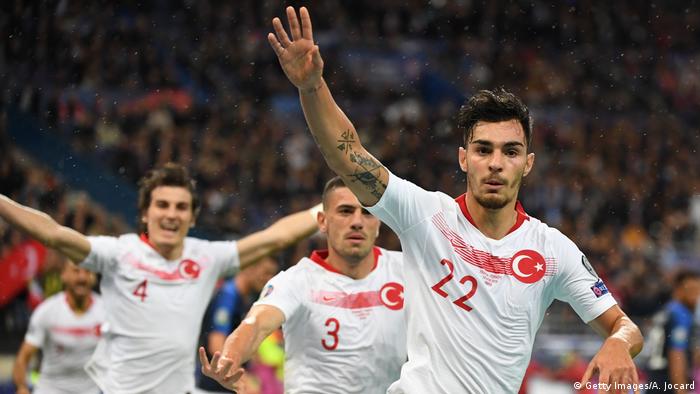 After racing away to celebrate his late equalizer for Turkey against France on Sunday evening, Kaan Ayhan was eventually forced to pull himself away from his euphoric teammates. They had begun to perform a military salute, but the 24-year-old and his Fortuna Düsseldorf teammate Kenan Karaman refrained from joining in.

Ayhan even appeared to be admonished by a teammate for refusing to participate.

Last week, both Ayhan and Karaman performed the military salute in a post-match team photograph following a 1-0 victory over Albania. Their actions drew negative headlines in Germany and critical responses on social media as the gesture was viewed as being supportive of Turkey's military offensive in northern Syria against Kurdish militia.

The indirect involvement of Germany internationals Emre Can and Ilkay Gündogan stoked the debate further.

Ankara's military operation has drawn international criticism and the Turkish national team drew the ire of European football's governing body UEFA for their actions, which said it would investigate the incident. The body's rules forbid political statements. 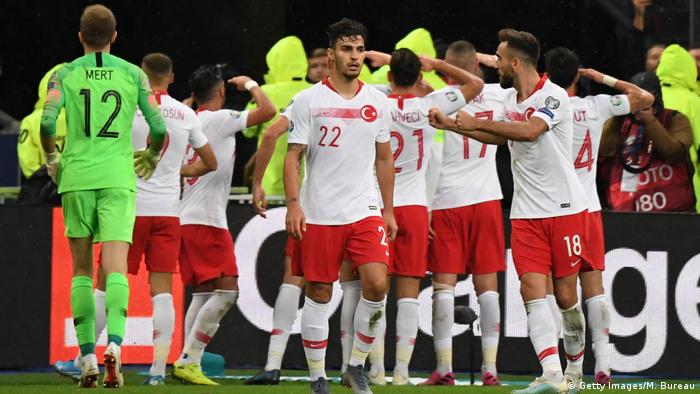 Kaan Ayhan turned his back on his teammates' military salute celebrations.

"Nationalism plays a very prominent and significant role in Turkey. And the role of the military is closely connected to nationalism. This is why the salute is not to be understood as sympathy for [Turkish president Recep Tayyip] Erdogan but as an expression of a deeply unhealthy Turkish nationalism.

"This petty nationalism disregards a war that is in violation of international law."

Fortuna stood by their German-born players after the first salute with sporting director Lutz Pfannenstiel speaking to both players and asserting they merely wanted to express solidarity for soldiers and their loved ones.

"We are convinced they had no choice but to make a political statement," Pfannenstiel said. "Both players stand for the values that our club lives."

It appears Pfannenstiel's words were taken on board by both Ayhan and Karaman. But Ayhan in particular has now received criticism from Turkey fans on social media, who have labeled him "disrespectful". 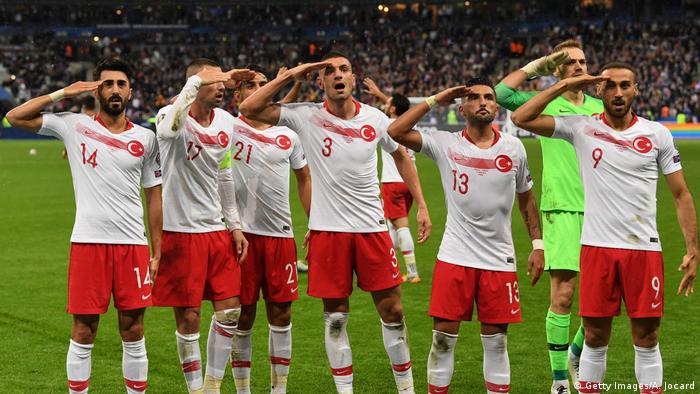 Turkey's players performed the salute again in the draw with France.

It can certainly be difficult to appease two different communities, in this case the Turkish and German fanbases. Tokatli believes Fortuna's statement provided "more confusion than clarity" and that both players are under pressure.

"It's not easy to serve both [cultures]," he said. "This complexity can be seen in the case of [Mesut] Özil. At first he was praised for his decision to play for Germany... while the Turkish public referred to him as a traitor.

"Then after the photo with Erdogan, the coverage was reversed: in Germany he was no longer considered integrated, while in Turkey he was praised as a 'true Turk'."

Second division club St Pauli took a different stance to Fortuna when dealing with their own player Cenk Sahin. The 25-year-old from Turkey had written in a now deleted Instagram post: "We are on the side of our heroic military and the armies, our prayers are with you." Sahin was swiftly told he could no longer train or play for the club.

"The prime factor in reaching the decisions were his repeated disregard for the club's values and the need to protect the player," a statement from St Pauli read.

Sahin has now traveled to train with Turkish side Basaksehir, which enjoy financial backing from directors with links to Turkish president Erdogan.

Amateur footballers in Germany have also become embroiled in the controversy after an Under-19 team from Türkspor/Cagrispor mimicked the military salute after celebrating a win in Nuremberg.

The Bavarian Football Association immediately moved to condemn the actions in a statement which read: "Players who abuse football for politically motivated provocations may be guilty of discrimination under section 47a of the Code of Legal Procedure and have to face severe penalties".

Association director Josef Janker said: "Football stands for fair play, respect, nonviolence, tolerance and recognition. Therefore, we will not deviate from our line of zero-tolerance policy in violent or discriminatory incidents."

In what is a complex debate, it is clear the immediacy and popularity of social media has exacerbated the potential for such pressing issues to blow up online. Nevertheless, Tokatli is adamant that footballers have to adopt a more informed and considered approach in their decision making.

"It's not a 'no-win' situation. There is always the possibility to avoid tricky situations."