European football's governing body has said it will be looking into the celebration of Friday's victory for Turkey against Albania. Football authorities may take a dim view of the "political gesture." 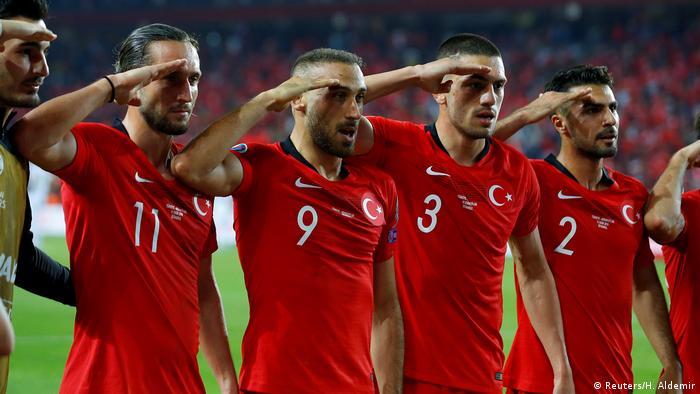 UEFA said Saturday it would examine reports that Turkey's national footballers gave a military salute in support of Ankara's armed offensive against Kurds in Syria.

"Personally, I have not seen this gesture, which could be considered a provocation," UEFA's media head Philip Townsend told the Italian news agency Ansa. "Does the regulation prohibit references to politics and religion? Yes, and I can guarantee you that we will look at this situation," he added.

The salute was made after Cenk Tosun's winning goal against Albania in Istanbul on Friday.

After the victory, an additional photo was posted on the Turkish FA's official Twitter account, with the squad posing, saluting the win in the dressing room to "dedicate their victory to our brave soldiers and fellow martyrs."

Article 16, 2 (e) of UEFA's disciplinary proceedings manual prohibits "the use of gestures, words, objects or any other means to transmit a provocative message that is not fit for a sports event, particularly provocative messages that are of a political, ideological, religious or offensive nature."

Turkish military action began on Wednesday after US President Donald Trump ordered troops to pull back from the border area of northern Syria.

On Saturday tens of thousands of Kurdish demonstrators marched through Cologne and other German cities against the Turkish cross-border military operation in northeastern Syria. In addition, the German government promised to halt arms exports to Turkey.