The German-language version of the Russian state broadcaster can no longer be transmitted in Germany. The timing of the ban comes amid high tensions between Moscow and the West. 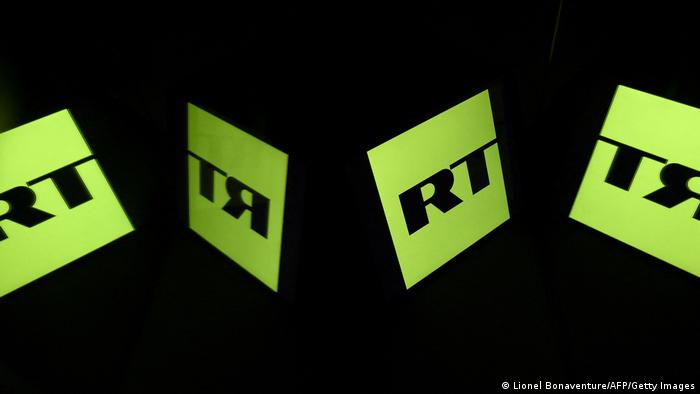 RT has been accused of spreading misinformation

Russian state broadcaster RT must stop broadcasting German-language programs in Germany as it "does not have the necessary broadcasting license," the German Commission on Licensing and Supervision (ZAK) announced Wednesday.

State-run RT has been accused of being a propaganda instrument for the Kremlin and spreading disinformation. It announced plans in March 2021 for a German-language channel. However, the plan was quickly met with doubts about whether the channel would receive a permit.

The channel, called RT DE, went on air in December 2021, claiming it had a Serbian license for cable and satellite transmission that allowed for broadcasts in Germany.

German regulators quickly took action, and within a week RT DE was taken down from Europe's satellite network. However, it was still available online and via a mobile app.

RT says it will defy ban

On Wednesday, ZAK said these services must immediately be discontinued, along with the satellite broadcast.

The regulator said Berlin-based operator RT DE Productions GmbH does not have a "legitimate permit under European law" to operate in Germany, adding that no other application has been made or granted.

RT DE said Wednesday that it will challenge the decision in court and claims its Serbian broadcasting license is in line with European law.

Its parent company, RT, said Wednesday that it would continue broadcasting.

"This is complete nonsense. We will not stop broadcasting," RT editor-in-chief Margarita Simonyan said on Twitter.

She said it was as if Russia's media regulator "banned Deutsche Welle from broadcasting on their own website."

Russia will have to retaliate to the RT DE ban, the Foreign Ministry said, adding that the response would impact German media in Russia.

"This step leaves us no choice other than to start implementing retaliatory measures against German media accredited in Russia," the ministry said in a statement.

In Germany, tensions over the RT DE channel are being folded into wider diplomatic tensions between Europe and Russia.

"The important thing for us is that Russian journalists should feel comfortable and not face discrimination," Lavrov was cited as saying by state news agency Tass.

In September, YouTube shut two German-language RT channels on the grounds that they were spreading misinformation on coronavirus.

Luxembourg last year rejected a license application by RT for German-language broadcasting, arguing that RT DE is based in Berlin, and most of its workforce is in Germany.

RT was launched in 2005 under the name Russia Today as a state-run broadcaster for international audiences. It has expanded with television and online services in English, French, Spanish and Arabic.

Considered Kremlin-friendly, RT has generated controversy in many countries. In the United States, it was required to register as a "foreign agent." The United Kingdom has threatened to revoke its license. RT is banned in several countries, including the ex-Soviet states of Lithuania and Latvia.