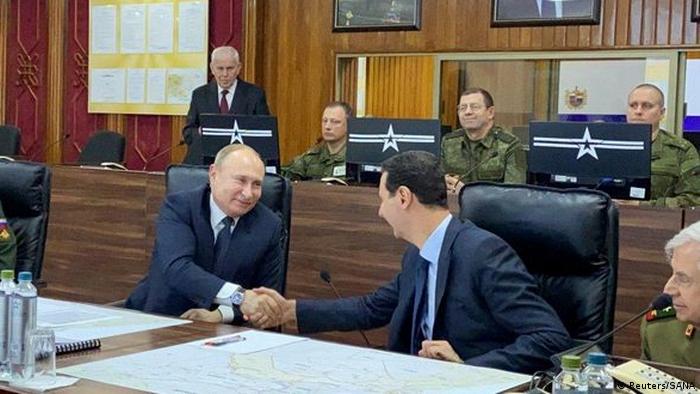 Russian President Vladimir Putin made an unannounced visit to Damascus on Tuesday and met with President Bashar Assad and other top officials.

It is only Putin's second visit to Syria, where Russian troops have helped government forces take back large swaths of the country from various rebel factions since 2015.

"In his conversation with Assad, Putin noted that we can now say with confidence that a huge distance has been traveled towards restoring Syrian statehood and the country's territorial integrity," Russian news agencies quoted Kremlin spokesman Dmitry Peskov as saying.

Syrian state media reported that the two leaders met at a Russian forces assembly location near the capital and listened to military briefings. The visit coincides with Orthodox Christmas on January 7.

The meeting comes amid heightened tensions between Washington and Tehran following a US strike that killed Iranian Revolutionary Guard General Qassem Soleimani and a top Iraqi militia commander in Baghdad.

Iran, which also backs the Assad regime in the country's war, has vowed to retaliate for the US strike. Iran-backed Shiite militia across the Middle East, including those in Syria and Lebanon's Hezbollah, have also vowed reprisals against the United States.

US forces are based in northeastern Syria and at the al-Tanf military base, near the border with Jordan and Iraq, as part of the mission combating the remnants of the so-called "Islamic State."

US ally Israel, which has carried out hundreds of airstrikes on Iranian and Iran-backed forces in Syria, is also on high alert for any retaliation stemming from Syria and Lebanon.

Putin's visit comes a day before he will meet with Turkish President Recep Tayyip Erdogan in Istanbul, where an ongoing Russian and Syrian assault on northwest Idlib province and a regional power struggle over Libya are expected to be high on the agenda.

A regime offensive in Idlib has displaced at least 300,000 people from the largely jihadi-controlled enclave in recent weeks, where Turkey has a dozen military posts as part of a fragile de-confliction agreement with Iran and Russia.

More than 3 million civilians remain trapped in the war zone, and Turkey fears a mass of refugees will flee across its border due to the offensive in Idlib.

The German chancellor will travel to Russia to meet President Vladimir Putin this coming Saturday. The pair plan to discuss the Iran escalation as well as the conflicts in Ukraine, Libya and Syria. (06.01.2020)