The Russian army has set up so-called filtration camps in the Donbas to screen civilians for political views before they are evacuated. DW spoke to three people who were able to get out of Mariupol. 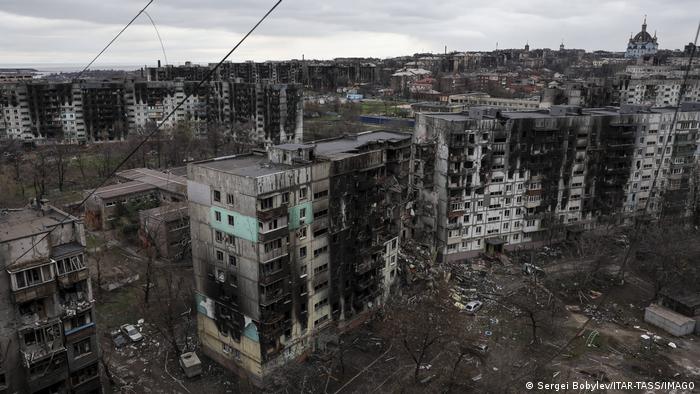 Most of Mariupol has been destroyed

Thousands of inhabitants of Mariupol in the Donbas in southeastern Ukraine took refuge in basements when the Russian army started shelling the city at the beginning of the war in February. Two months of relentless bombing later, 95% of the city has been destroyed, according to the Ukrainian government. Three people who were able to leave told DW about their experiences of interrogation in so-called filtration camps before being deported to the Russian Federation.

The Soviet Union had already set up such camps during World War II for soldiers returning home in order to detect suspected "traitors." Petro Andriushchenko, the counselor to the mayor of Mariupol, said on Ukrainian radio that there were four such camps in the surroundings of the city.

DW has changed the names of those people it spoke to in order to protect them.

'Just write what's dictated to you and don't ask any unnecessary questions.'

Dmitriy, 31 years old, left Mariupol on March 21, with his wife and baby

"In the first days of the war, there was a network failure, and we had no more access to information. We sat in the basement from March 8 onwards and around March 15, enemy soldiers appeared. They told us that we could evacuate to the so-called 'Donetsk People's Republic.' But it was a strange evacuation. People were trying to escape under fire. There was complete chaos. Eventually, we walked about eight kilometers (almost five miles) to the checkpoint and it took us about four hours to get through it. All men had to strip down to their waists. Our documents and belongings were checked.

Then we were taken by bus to a school in Novoazovsk. Three days later, we were supposed to go through the filtration process somewhere and then taken to Russia, which we definitely did not want.

Two weeks later, we found out from friends that we could go through the verification process in the village of Bezymyannoye on our own. There were three stages. In the first tent, a soldier asked me to strip down to my underpants. He searched me for tattoos and weapons. Then he took away my phone and looked at all my contacts and photos. He asked me: 'Where did you live and work? Do you know anyone from the Azov Regiment? What do you think about Russian and Ukrainian politics?' In the second tent, my telephone was taken away again, and my fingerprints were taken and I was photographed.

The most unpleasant stage was the last one in the third tent. A soldier told me to write a statement based on a draft, which said that I was familiar with a certain article of the constitution of the so-called 'Donetsk People's Republic.' When I asked about the article, he said: 'Just write what's dictated to you and don't ask any unnecessary questions.' Then I was asked about my job and my attitude toward Russia and whether I had acquaintances in the Ukrainian army. I wrote my answers in the statement.

Everything went smoothly, perhaps because I gave the 'right' answers. I had heard shouts and men who had asked why Russia had invaded and had ruined their homes and lives being insulted. In the end, I was given a piece of paper, which stated that I had gone through the filtration process. With it, I could stay on the territory of the so-called 'Donetsk People's Republic' and enter Russia.

In the end, a private driver brought us from Donetsk to Poland via Russia. At the Russian border, I saw leaflets with the heading 'The far east of Russia is waiting for you.' People told me that those who took up the offer were given 10,000 rubles (ca. €300 or $315) and some kind of job. Finally, we were able to cross the Russian-Latvian border and breathe a sigh of relief. Now, we are in Poland and want to go on to Austria where we have friends." 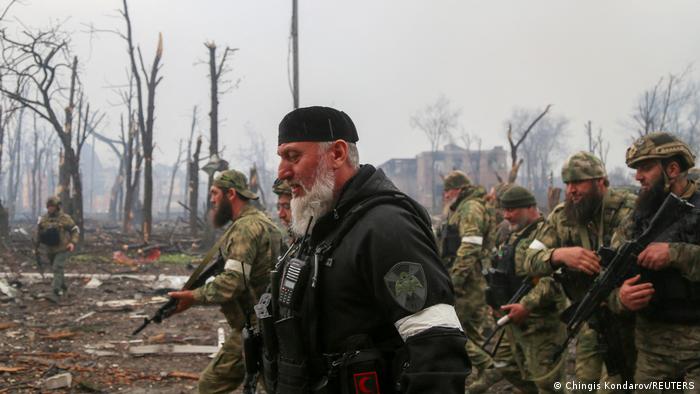 Chechen special forces are fighting with Russia in Ukraine

'I was really scared that they would not let me leave'

Anna, television journalist, left Mariupol on March 24 with her husband and child

"After days in the basement, we decided on March 24 to find out if we could get away. We met a soldier with a white armband who told us where the evacuation point was. A bus took us from there to Volodarsk and on to Donetsk where we were put up in a school. My husband had to undress and was searched for tattoos and weapons. He had to say where he worked and whether he was against Russia.

I was asked whether the head of my television station had pro-Ukrainian views and whether he had forced us to speak badly about Russia in our reports. I had to give the numbers of all my colleagues, make a statement about my political attitudes and say what language I had moderated programs in and which language my guests spoke.

About an hour into my trip toward the Russian border, the same soldiers got me off the bus. I was really scared that they would not let me leave. They asked me more questions about my acquaintances and copied all my contacts.

From the Russian border, another bus took us to Taganrog where we were told we could go anywhere we liked if we had accommodation. Because my husband urgently needed medication that is not available in Russia, we made our way to Europe." 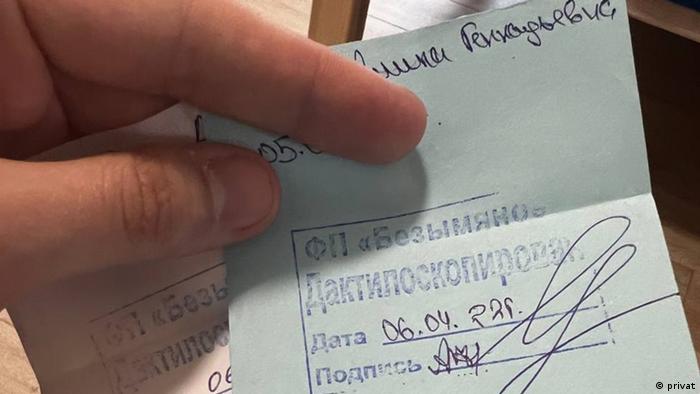 'I feel hatred, which I am ashamed of'

Varvara, 67, and her husband spent a month in Mariupol before leaving the city on March 25.

"My husband and I saved for 40 years so that we could live a dignified life when we got old. Now we've lost everything.

On March 25, Russian soldiers turned up near our home where we had hidden in an air raid shelter. They said: 'If you don't come out in 10 minutes, we'll throw a grenade and blow you up.' They sent us to the church. Uniformed soldiers examined our passports and brought us to the village of Berdyanskoye. The women were not examined. But the men were, their shoulders, arms, legs and backs.

A bus brought us to the village of Bezymyannoye, to a school. We were given food, but we had to sleep on the ground. In the morning, a bus took us to the city of Tores, where our fingerprints and measurements were taken, our passports were photocopied and our telephones were checked. We were scared of the armed men.

They took us to the police station where I was interrogated by many people. They asked me about my job and home and where I wanted to live. I said: 'In Ukraine.' They laughed: 'There won't be such a country,' they said. I found out later from other people that it's possible to apply to live in Russia and you can get 10,000 rubles. But then apparently you can't leave Russia for 10 years.

A miner brought us back to Bezymyannoye where our nephew was and we went with him across the Russian border to Rostov. Volunteers welcomed us and thanks to them we could wash and get changed. We carried on by bus to Belarus in order to get back to Ukraine. When we arrived in Minsk we were picked up by acquaintances who brought us to the Ukrainian border.

I will never understand, forgive or forget what Russia has done. I was loyal to Russia before the war but now I feel hatred, which I am ashamed of. The 88-year-old sister of my husband died in Mariupol. She said that even the Germans had not bombed the city so much during World War II."

Ukraine: Can Russia be held accountable for war crimes?