The twin reactors have left their home port of St. Petersburg for a long, slow journey to Siberia. Environmentalists have slammed the mobile maritime reactors, saying an accident could damage parts of the Arctic.

Russia launched a floating nuclear power plant out of its shipyard in St. Petersburg on Saturday.

The Akademik Lomonosov, built at the port in the former capital, was towed out to sea for the start of a long journey.

The plant will traverse the Baltic Sea and pass the northern tip of Norway before stopping in Murmansk in northwest Russia, where the nuclear reactors are to be loaded with fuel.

From there the barge will wind its way to the Russian Far East and the Arctic coast off Chukotka.

There, it is expected to go into service in 2019. The idea is for it to power a port town, oil rigs and a desalination plant.

The twin reactors are expected to provide up to 200,000 people with electricity. 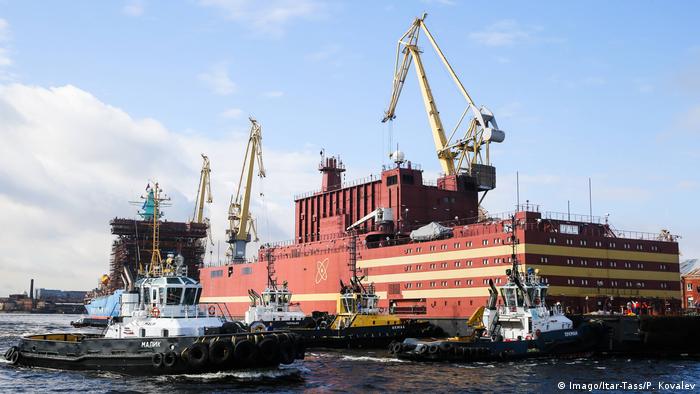 Environmentalists have slammed the sea-based plant, with Greenpeace calling it a "floating Chernobyl."

They have also dubbed it a "Chernobyl on ice," a reference to the 1986 nuclear disaster at the Chernobyl power plant in what was then Soviet-controlled Ukraine. The worst nuclear accident in history prompted a mass evacuation and left large swathes of Ukraine and neighboring Belarus uninhabitable.

Nature is taking back habitat in Chernobyl

Russia is eager to mine Siberia's rich deposits of oil and gas that are thought to extend out to sea toward the North Pole.

Global warming has resulted in a rapid melting of Arctic ice, which is opening up new shipping routes through Russia's north.

The Kremlin is also seeking to strengthen its military presence in the region.