Russia′s far-right divided on Ukraine war | Europe | News and current affairs from around the continent | DW | 18.06.2022 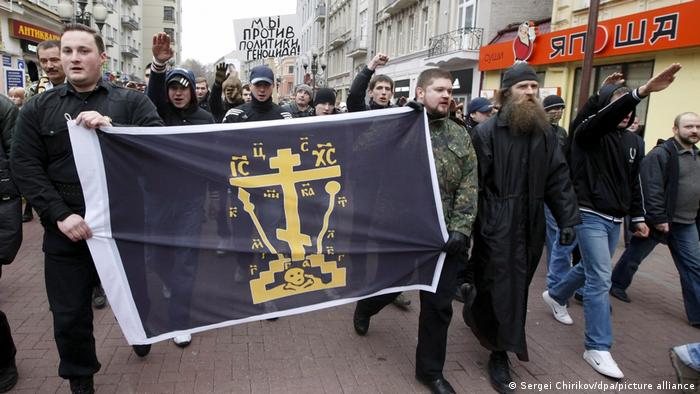 A few dozen small groups make up Russia's right-wing nationalist scene. They call themselves "Nationalist Movement," "Conservative Russia," or simply, "The Conservatives." Some support President Vladimir Putin and are fighting alongside Russian troops in Ukraine, others reject the Kremlin outright.

A glimpse of just how splintered Russia's right-wing scene is was evidenced by the varying positions they took in 2014 in reaction to the pro-European Maidan movement and the start of the conflict in eastern Ukraine's Donbas region.

Russia's military offensive in Ukraine has only fueled the divisions among nationalists. When Russia invaded neighboring Ukraine on February 24, some right-wing extremists immediately joined the war effort, but others rejected the invasion, and still do today.

According to a new report by the Center for Information and Analysis (SOVA), a Moscow-based racism research institute, right-wing groups are not very widespread in Russia. But that is mainly due to the fact that the Kremlin does not tolerate opposition: Street protests and demonstrations in the country have been completely shut down, purportedly due to health concerns over the coronavirus.

Even so, authorities began denying organizers of Russian nationalist marches permits back in 2019, before the pandemic began. Earlier still, in 2016, well-known extremist Dmitry Demushkin was jailed for two-and-a-half years. Then authorities blocked the website of the popular nationalist group "Sputnik and Pogrom" in 2017.

Although the Kremlin has managed to break up nearly all of the country's nationalist organizations, the ideas they propagate nevertheless continue to reflect popular sentiments held by many Russians, says Lev Gudkov, head of the Levada Center, a Moscow-based independent polling outfit that the Kremlin labelled a "foreign agent" in 2016.

Gudkov says many Russians reject other ethnicities and cites the right-wing online group "Male State" as an example. The group propagates a patriarchal, nationalist world view and garnered attention in the summer of 2021 with a harassment campaign directed at the Asian restaurant chain Tanuki. The harassment focused on an ad campaign that featured rainbow flags and African models. Tanuki was subjected to an endless barrage of fake take-away orders and negative restaurant reviews. Some stores even received bomb threats.

According to Gudkov, the main thrust of their activity is a type of "non-aggressive everyday racism." "They aren't nationalists who insist upon the superiority of the white race," he added. "They propagate the idea of a national-democratic system." 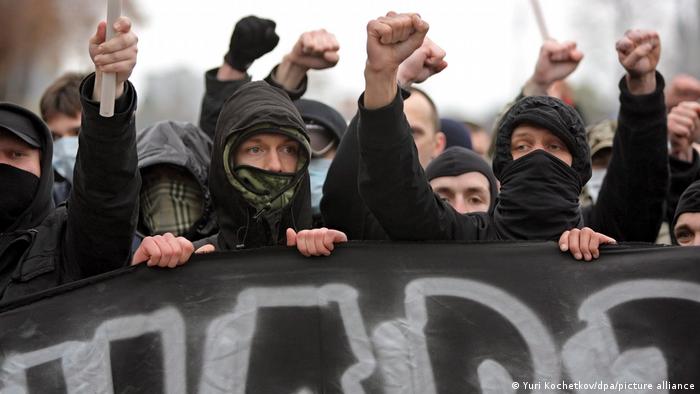 Divided by the war in Ukraine

Nevertheless, there is little consensus on just what such a system should look like. And that lack of agreement has subsequently robbed nationalists of the opportunity to present a united front, explains Vera Alperovich, an expert at SOVA and co-author of the report "Xenophobia, Freedom of Conscience and Anti-Extremism in Russia in 2021."

One of the most well-known Kremlin-friendly nationalist groups in Russia is the self-proclaimed "sabotage and reconnaissance" outfit "Task Force Rusich." According to Alperovich, Rusich, which is aligned with the mercenary Wagner Group, is a neo-Nazi organization that uses symbols such as swastikas and the numeric code "14/88" — which glorifies the white race and Adolf Hitler.

Among those currently fighting with Rusich in Ukraine are several members of the music group "Russian Banner." In interviews, band leader Evgeny Dolganov has explained that Russian Banner wants to spread patriotic nationalist views among young fans. When DW confronted him with accusations of neo-Nazism and fascist tendencies in the group he offered what he called his "standard response": "We're not fascists. We're far worse. Worse for our enemies! We're normal men and women who want to live in our country and raise our children (boys and girls) according to tradition."

With the war, Dolganov believes the Kremlin is protecting "Russian people in Ukraine from having a false, Ukrainian, Russophobe identity forced upon them." Dolganov says the aim of the right-wing movement is to "fight against injustice and population replacement, and for prosperity." He says a great way to sum it all up is to say they are fighting "for our future and that of our white children."

But many others, who sociologist Gudkov calls nationalist-democrats, have spoken out against Russia's war in Ukraine. One of them is the formerly jailed Dmitry Demushkin. "The Rusich Battalion and the Imperial Legion are being led by one of my former fighters," he said.

Today Demushkin sees himself as a "traditional nationalist," but in his earlier days he organized "Russian marches" and led various right-wing associations that the government labeled extremist. Now he takes to social media to call for the end of Russia's war in Ukraine, criticizing it as "fratricide."

After authorities in Moscow banned Demushkin's organization and he was jailed for claiming "Russia needs a Russian state authority," he lost all faith in Vladimir Putin. He also says he no longer believes in Putin's vision of building a "Russian world," a civilization that is unique and non-Western.

Demushkin says it is unclear exactly what kind of "Russian world" the Kremlin is foisting on Ukraine, adding: "Corrupt courts, powerful unelected governments, censorship, restrictions, penal laws and bans? That's why they are going there with tanks and not ideas."

Even though Russian nationalists fighting in Ukraine attract attention in the press, their groups are not that popular at home. Observers say right-wing organizations and parties in Russia don't have nearly the size or influence they did in the 2000s.

SOVA expert Vera Alperovich says the actual number of active members affiliated with nationalist groups in the country is small. She adds that there are no longer "big stars in the ultra-right firmament," which is likely due to the lack of political life in the country. Gudkov, however, offers a different take, pointing to the battle cry "Russia for Russians," which he says is more popular now than any time over the past 30 years. 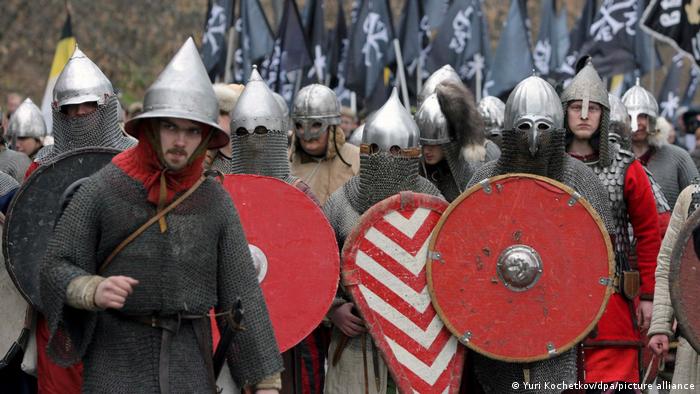 This article was originally written in Russian