The EU has targeted individuals working with Russia's Wagner Group, a private military contractor, which the bloc said is involved in "serious human rights abuses" in the Middle East, Africa and Ukraine. 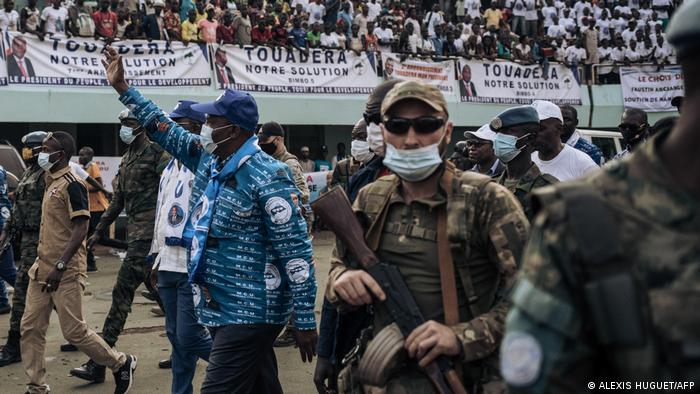 The European Union on Monday imposed sanctions on the Russian-based private military contractor known as the Wagner Group, which is accused of carrying out "hybrid warfare" on behalf of the Kremlin.

"They represent a threat and create instability in a number of countries around the world,'' EU foreign policy chief Josep Borrell told reporters Monday after a meeting of EU foreign ministers.

The foreign ministers decided to "target the Wagner group itself, and eight individuals and three entities connected to it," according to a statement. The sanctions include asset bans and travel freezes intended to limit the group's operations.

The statement added that those who have been targeted "are involved in serious human rights abuses, including torture and extrajudicial, summary or arbitrary executions and killings, or in destabilizing activities in some of the countries they operate in."

The countries where Wagner is said to operate  include Libya, Mali, Syria, Ukraine and the Central African Republic.

What is the Wagner Group?

The Wagner Group is a private military contractor that has been involved in flashpoints around the world. It has a controversial reputation primarily due to the conduct of its personnel, but also because of who leads and finances the organization.

EU lawmakers have said the group should be considered as a "proxy organization" for the Russian state. The EU said the group is "spreading its malign influence ... notably in the Sahel region" of Africa, which includes Mali. Germany and France have objected to the presence of Wagner Group fighters in Mali.

Since 2014, rights groups and media reports have linked the Wagner Group to separatist insurrection in eastern Ukraine. It has been in the crosshairs of the US and the EU for a number of years.

Dmitry Utkin, who is believed to be the paramilitary group's commander, was Monday's list of eight sanctioned individuals.

Utkin is a former military intelligence officer and is accused of ordering the torture and murder of a Syrian deserter, which was filmed and made global headlines.

Russian oligarch Yevgeny Prigozhin is understood to be the financier of the Wagner Group and is said to be a close associate of President Putin.

In 2018, the US imposed sanctions on Prigozhin. as he was indicted in the US probe into Russian interference in the 2016 elections. The EU followed up with its own punitive measures targeting the Russian national.

The move on Wagner Group comes as the EU foreign ministers warned of an unprecedented economic response, should Russia carry out an invasion of Ukraine, amid tensions over a Russian troop build-up near the border with Ukraine.

"The ministers — all of them — have been very clear today that any aggression against Ukraine will come with political consequences and with a high economic cost for Russia," Borrell told reporters on Monday, following talks.