Two people have died after a gunman opened fire at a regional FSB intelligence office in the eastern Russian city of Khabarovsk. He is also suspected of killing a shooting instructor to steal guns for the attack. 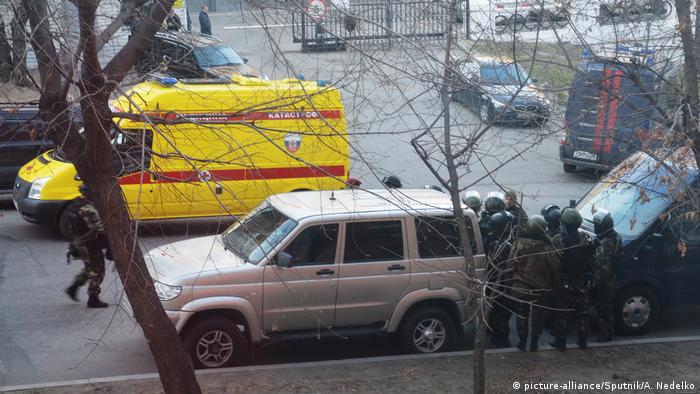 An 18-year-old man opened fire at a local office of Russia's Federal Security Service (FSB) on Friday, killing one FSB employee and a civilian in a far eastern Russian city, authorities said.

Authorities said the attacker began shooting as soon as he entered the reception area of the agency's office in Khabarovsk.

One other visitor was also wounded in the attack. The assailant was subsequently shot dead, according to the FSB, the domestic intelligence agency that is the main successor of the Soviet KGB.

The suspect is also believed to have shot and killed a shooting instructor to steal two handguns and a carbine, the intelligence agency said later on Friday.

Both the visitor who was killed and the one who was injured were from former Soviet states outside Russia, the FSB added.

The Site Intelligence Group, a US-based monitoring service, said that the self-proclaimed "Islamic State" (IS) group claimed responsibility for the attack through its Amaq news agency.

The claim of responsibility contradicted earlier reports from Russian news agency TASS and the FSB which said that the assailant was a local resident and had been active in the neo-Nazi scene.

"There is information about his belonging to a neo-Nazi group," the FSB said in an earlier statement, without providing further details.

Attacks on Russian law enforcement are generally rare occurrences outside the country's volatile North Caucasus region. Russia has seen significant support for far-right groups that have sparked brutal confrontations with immigrants from the former Soviet region.

Authorities under President Vladmir Putin have also cracked down on neo-Nazi extremists within the country, despite stoking nationalist sentiment since the annexation of Crimea from Ukraine in 2014.

The country was shaken earlier this month when a suicide bomber struck a St. Petersburg metro train, killing 16 people. The suspected bomber and his accomplices were reportedly from Central Asia.