The little-known head of Russia's tax service is taking over after the government's shock resignation. The overhaul fueled speculation about President Vladimir Putin's plans for maintaining power after his term ends. 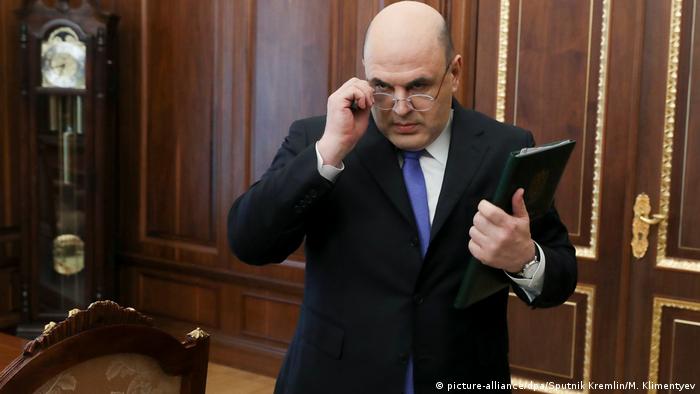 Lawmakers approved Russian President Vladimir Putin's nomination for a new prime minister on Thursday, following a series of bombshell announcements including constitutional changes and the resignation of the government.

The State Duma, Russia's lower house of parliament, voted in favor of tax authority chief Mikhail Mishustin. He received 383 votes out of the 424 cast — which included 41 abstentions. Putin later formally signed off on Mishustin's nomination, making his promotion to prime minister official.

In an address to parliament ahead of the vote, Mishustin said that Russians must "feel real changes for the better" and that he was committed to keeping inflation at around 4%.

He added that all members of his government will "bear personal responsibility" for achieving Putin's economic development program, Russian news agency Interfax reported.

On Wednesday, Putin said he was "satisfied" with the previous government's performance, although it failed to fulfill certain tasks.

Mishustin's nomination to replace Dmitry Medvedev as prime minister came as a surprise. Mishustin has been leading Russia's federal tax authority since 2010 and is not considered a high-profile politician in Russia.

It was not immediately clear whether Mishustin will be a temporary figure or if he was selected as a possible successor to Putin. The new prime minister said that an announcement will be made in the next few days about the composition of his Cabinet.

The shocking overhaul in Russian politics came after Putin's annual speech to lawmakers on Wednesday where he proposed a series of constitutional reforms that would grant more powers to parliament — including the ability to select the prime minister.

Shortly after the announcement, Medvedev announced that he and the rest of the Russian government were resigning to clear the way for the changes to be made.

The day of announcements sparked speculation about what path Putin will take to maintain his grip on power after his presidential term ends in 2024.

Putin, a former FSB chief, has been in power in Russia for over 20 years and has served as both president and prime minister. The 67-year-old is currently in his second consecutive term as president and is prohibited by law to run for another term.