Russia to get new prime minister after government resigns

Russia will soon get a new prime minister — with Mikhail Mishustin, who heads the country's tax service, tapped to take on the role. Dmitry Medvedev resigned after longtime ally Putin announced constitutional reforms.

The little-known head of Russia's tax service, Mikhail Mishustin, was named as the next prime minister of Russia hours after Dmitry Medvedev resigned on Wednesday, capping a day of unexpected changes to Russian politics.

"President Vladimir Putin had a working meeting with Mikhail Mishustin and suggested that he take on the duties of the head of government," the Kremlin press service said. "With his consent, [Putin] submitted the prime ministerial candidacy of Mishustin to be considered in the Duma."

Mishustin has been leading Russia's federal tax authority since 2010 and is not considered a high-profile politician in Russia.

"The candidacy of Mishustin is absolutely unexpected, but this does not mean that he is a person which causes resistance," the deputy head of Russia's Federation Council, Ilyas Umakhanov, told the Interfax news agency. "Not all heads of tax institutions enjoy sympathies and affection. In my opinion, this is the prevalent public mood towards Mishustin."

Umakhanov described the tax official as a man of "great experience, the person who was part of the system."

Mishustin, 53, was born in Moscow and worked as an IT expert in the 1990s. He began working in the tax service in 1998 and was later named deputy tax minister. In 2008, he served as the head of Russian investment company UFG, which at the time cooperated with Germany's Deutsche Bank. Mishustin was named head of Russia's tax service in 2010 after his predecessor left for another post. The newly appointed prime minister is also a member of the board of Russia's Ice Hockey Federation.

Mishustin met with senior Duma lawmakers on Wednesday evening after being tapped for the new role. The lower house of Russia's parliament is due to vote on his candidacy on Thursday. 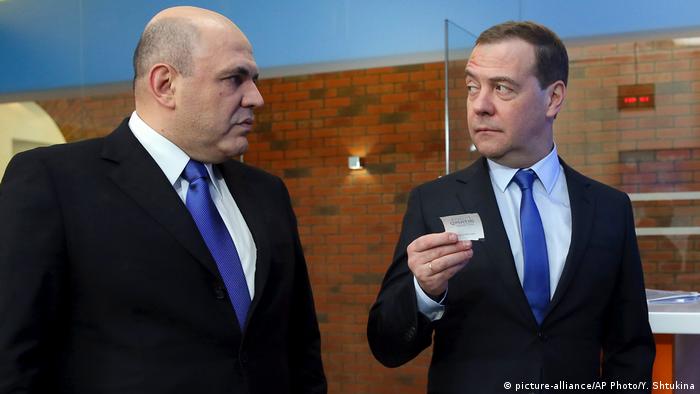 'Not everything works out'

The news came on the heels of President Vladimir Putin's annual speech to lawmakers where he proposed a series of constitutional reforms that would grant more powers to parliament — including the ability to select the prime minister.

The changes would significantly alter the country's balance of power and so "the government in its current form has resigned," Medvedev said on state television while seated next to Putin.

The prime minister said the move was aimed at clearing the way for the changes to be made. Putin earlier said the constitutional amendments would be put to a referendum.

Putin has asked the outgoing government to continue to carry out their duties until a new government is formed. The Russian president added that he was "satisfied with the government's performance" although the government failed to fulfill certain tasks, reported news agency Interfax.

While Putin and Medvedev appeared to present a united front in their public appearance, Russian political analyst Alexey Kurtov interpreted the prime minister's resignation as a show of "disagreement" with sweeping changes suggested by Putin.

"I think this was a spontaneous reaction from Medvedev, who disagreed with the general line of the president's proposals," said Kurtov, who serves as president of the Russian Association of Political Consultants (RAPC).

According to Kurtov, Medvedev has been engaged in a long-running power struggle with the current Duma speaker, Vyacheslav Volodin. The proposed changes would give the Duma powers to appoint the prime minister.

Putin heading for the Duma?

The maneuver could prove crucial for Putin's future. The former FSB chief took power in 2000 and has since served as both president and prime minister. The 67-year-old is currently in his second consecutive term as president and is prohibited by law to run for another term.

"I wouldn't exclude that Putin sees himself taking on the speaker's chair in the parliament in the future," political analyst Abbas Gallyamov told DW. "Since Putin's main task now is to secure his own political future, we can assume he is paving the way for himself there."

Opposition politician and former economy minister Andrey Nechayev told DW that Puting was "sounding out the terrain, in order to stay in power forever."

While Medvedev is set to leave the prime ministerial seat, Putin signaled he would keep his longtime ally near the center of power as the deputy head of Russia's Security Council. The committee is chaired by Putin himself and deals with affairs of national security. The prime minister, several government ministers and heads of security agencies are among the council's members. On Wednesday, Putin suggested creating the position of Council's deputy chief and said Medvedev should take the post.

"It feels like Medvedev is being put in reserve," analyst Alexey Makarkin told Russia's Interfax news agency. "The Security Council post, which is offerted to Medvedev, is senior, but also not autonomous."

With Putin's support, Mishustin is virtually guaranteed to win the parliamentary vote that would allow him replace Medvedev as Russia's new prime minister.